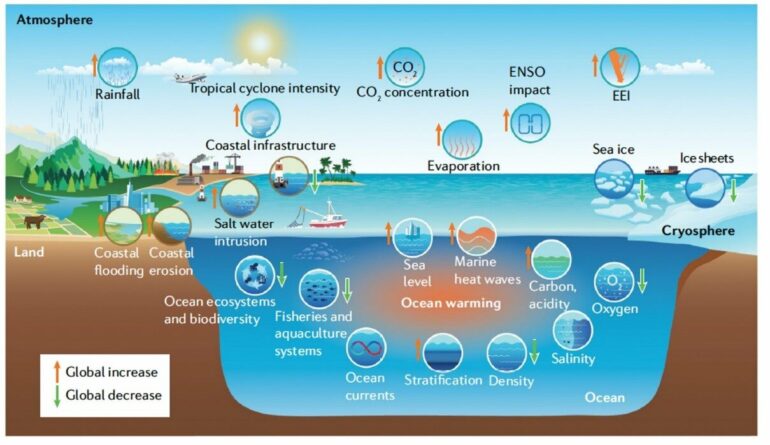 A research study just published in Nature Reviews Earth & Environment provides new information about how much the planet has warmed and what warming we may expect in the coming decades. This study is important because it motivates us to take actions to mitigate and respond to climate change. It shows what will happen if we don’t take action to slow global warming.

As humans emit greenhouse gases into the atmosphere, it causes the Earth to warm. The vast majority of heat ends up in the ocean (more than 90%). So, to understand how fast the Earth’s climate is changing, we must look to the ocean and track ocean heat content change. The ocean provides the key to understanding both our past and our future. Ocean warming also connects energy, carbon, and water cycles, as it is a key component of the Earth system.

This comprehensive review involved scientists from around the world and included leading institutions in China, France, U.S., Australia, and the U.K. The authors collected temperature information from the world’s ocean using a variety of temperature sensors. Some of these temperature sensors are manually placed in the oceans by researchers, others are deployed by cargo vessels, and many are autonomous devices that float in the ocean or are tethered, like a buoy or mooring. By combining many thousands of temperature measurements spread across the globe, the scientists were able to piece together a clear picture of global ocean heat content change back to the 1950s.

With these measurements, the community has produced many datasets to monitor ocean warming. The authors have done a thorough assessment on the validity of each dataset based on the progress in the field during the past years, and then were able to calculate how fast the ocean has warmed.

They found that upper 2000m warming began, unequivocally, at least in the 1950s. The warming has continued since then. Now, the upper 2000m ocean warming is accelerating with the rate more than doubling (from

A second finding is that we can predict what will happen to the ocean in the coming decades. Scientists use measurements of the past to help predict what the future will bring.

The most important finding is: the future of ocean is on our hands. If deep cuts in greenhouse gas emissions are made (i.e., if the target of the Paris Agreement of limiting global surface temperature to 2°C above the pre-industrial level can be achieved), the acceleration of ocean warming will stop at around 2030. However, if we don’t take action, the predictions are quite dire. The rate of warming will skyrocket throughout the 21st century: by the 2090s, the rate of ocean warming is projected to be four times larger than the current level.

Another finding from the paper is that, although the ocean warming in all basins are projected to continue warming throughout the 21st century, some ocean regions are warming faster than others. For example, the Atlantic Ocean and southern oceans are warming much faster than the Pacific Ocean and Indian Ocean.

By the end of this century, the Pacific Ocean is expected to become the biggest heat reservoir owing to its large volume. The authors were able to show that when extra heat gets into the ocean, water currents can carry that heat to the far reaches of the planet.

A warmer ocean brings tremendous consequences on the Earth. Not just to sea life but to the weather patterns across the planet and to the food chain. A warmer ocean leads to more intense storms, more deadly rainfall and flooding, and more powerful typhoons and hurricanes. A consequence of warming is that parts of the planet will become drier, with more heat waves and droughts. Other parts will become wetter as rainfalls happen in bigger downbursts. Coastal regions are increasingly vulnerable in association with rising sea levels, storm surges and adverse impacts on ecosystems. 2022 already has experienced a wide range of climate disasters: heat waves, flooding, heavy rainfalls, and strong hurricanes.