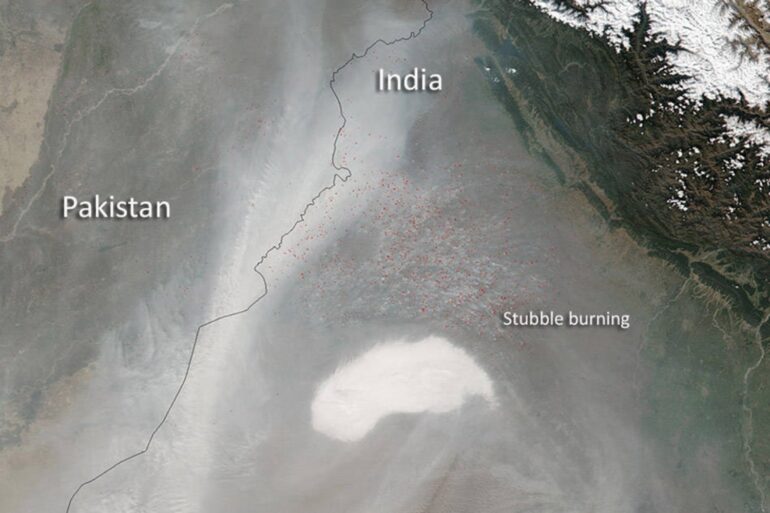 To clear the way for planting wheat in November, a farmer in Punjab, India, sets aflame the leftover straw, or stubble, of a harvested rice paddy crop in October. The burning residue fills the air with carbon monoxide, ozone, and fine particulate matter (PM2.5) that will make it harder to breathe for days afterward and for miles around. It’s a scene that’s replicated on about 2 million farms in the Punjab and Haryana states of northwest India every autumn (and every spring after the wheat harvest), raising health risks—particularly of respiratory and cardiovascular diseases—and premature death rates downwind in India and throughout South Asia.

To date, government regulations, largely imposed at the state and national level, have been ineffective in curtailing crop residue burning in India. The practice continues apace, driven by the limited economic value of rice and wheat residues, and the ongoing need for cheap, ultrafast disposal of residues between harvesting and planting of the rotating crops. Such attempted bans are also deeply unpopular. A national ban on burning was repealed last year due to pressure from farmers, who see such legislation as further increasing the already-significant economic hardships faced by small-scale landowners.

In search of more effective solutions, a team of researchers at MIT and Harvard University estimated which burning events, in what locations and at what times, produced the greatest increases in population exposure, premature deaths, and economic losses in India during the years 2003–09. Then they quantified how small-scale and targeted actions could reduce air pollution and health risks for the entire population. Their findings appear in the journal Nature Communications.

Based on computer models of the seven-year study period, the researchers attributed between 44,000 and 98,000 PM2.5-exposure-related premature deaths annually to crop residue burning, with 67–90% occurring as a result of burning that took place in the Punjab, Haryana, and Uttar Pradesh states. They also found that six districts within Punjab—each with relatively high cultivation of residue-intensive crops and downwind population density—contributed 40% of India’s annual air-quality impacts from the practice.

The research team next identified several opportunities to reduce crop residue burning and its attendant health effects. First, if farmers in Punjab were to burn crop residues two hours earlier in the day, they could avert up to 14% of air-quality impacts and about 10,000 deaths each year. They could achieve further reductions by adopting rice varieties such as basmati that require less residue burning. Finally, such targeted actions could achieve most of their benefits if adopted in just a few regions, given the large contribution from the aforementioned six districts in Punjab.

“Our findings show that targeted and potentially inexpensive interventions could go a long way toward mitigating the public health impacts of crop residue burning in India,” says Sebastian Eastham, a lead author of the study and a principal research scientist at the MIT Joint Program on the Science and Policy of Global Change. “By focusing on the timing and location of burning for the first time, our study expands decision-makers’ options for reducing health impacts and economic costs to farmers and the general public.”

To produce a comprehensive map of the time and location of crop production and residue burning, the study combined crop residue emissions estimates from the Global Fire Emissions Database version 4.1s (GFEDv4.1s) with district-level crop production data for India. An atmospheric model (GEOS-Chem adjoint) was then used to determine how air quality across India changed in response to residue burning in any single location and at any given time of the year, down to individual hours.

Finally, these data, in combination with health and economic impact models, yielded estimates of which burning events, in what locations, and at what times, produce the greatest increases in population exposure, premature mortality, and economic losses.

To build on this study and achieve significant reductions in crop residue burning, the research team envisions a comprehensive cost-benefit analysis of its proposed small-scale interventions along with additional incentives for farmers.

“We hope that our findings can help policymakers find equitable solutions that can be implemented in the near term and help everyone—small-scale, practical changes that can reduce the health impacts of residue burning without imposing undue economic burdens on Indian farmers. Such interventions can then buy time to find more comprehensive solutions,” says Eastham.

Citation:
A targeted approach to reducing the health impacts of crop residue burning in India (2022, December 1)