A warm intrusion in the Arctic causes extreme pollution levels 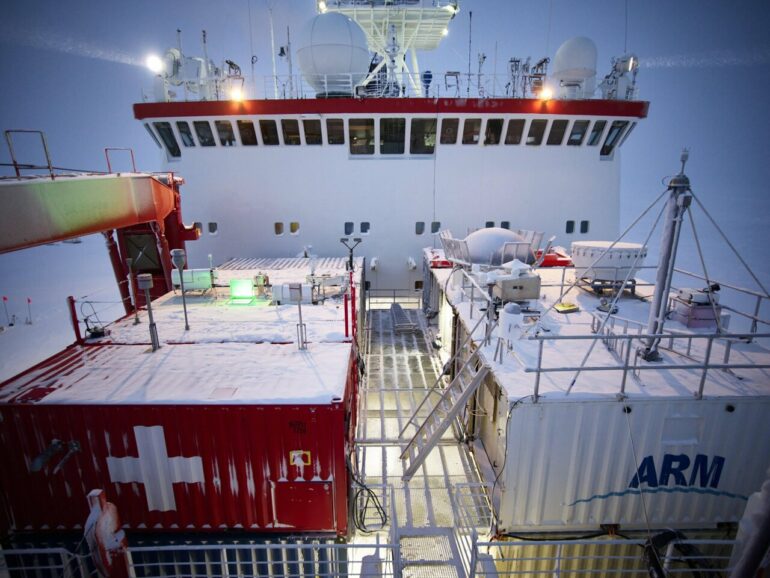 During the MOSAiC research expedition, conducted in the Arctic pack ice between 2019 and 2020, EPFL scientists observed an atmospheric perturbation triggered by the intrusion of a highly polluted warm air-mass. A first study providing further insight into the phenomenon and its potential implications has just been published.

Weather instruments installed on the Polarstern icebreaker recorded a huge jump in the near-surface air temperature, from -30.8°C to almost 0°C, between 14 and 17 April 2020. This was a record swing that had never been observed in the central Arctic Ocean within the available weather climatology, starting 40 years ago. The icebreaker was operating under the MOSAiC expedition, which aims to gain a better understanding of the drivers of Arctic accelerated climate change and how it is impacting the region. During the expedition, hundreds of research instruments made millions of real-time measurements, collecting data on biological, chemical and physical properties from the ocean bottom to deep inside clouds.

One of the scientists on board the Polarstern was Julia Schmale, a tenure-track assistant professor at EPFL and the head of EPFL’s Extreme Environments Research Laboratory (EERL), based at the ALPOLE research center at EPFL Valais Wallis. Together with a postdoc of EERL, Lubna Dada, and several MOSAiC colleagues, they have published a study in Nature Communications providing important insight into this troubling phenomenon.

Data collected by the researchers show that a mass of warm air carrying large quantities of pollutants from northern Eurasia had intruded into the high latitudes. Their study is the first to reveal the chemical and microphysical properties of particulate matter swept into the central Arctic by a warm intrusion, and to relate these findings to climate-relevant impacts on cloud formation.

“We already knew from weather forecasts that a warm air mass was coming,” says Schmale. “It’s a process that occurs regularly in the region. But when we looked at the pollution data we recorded, we saw something that we’d never seen before.” Schmale therefore checked the readings of the air-measurement instruments frequently and noticed that it wasn’t just the temperature increase, but unexpectedly the number, mass concentration and cloud-forming potential of the advected particles that reached record levels. Her colleagues on the Polarstern were collecting equally surprising data on snow and ice.

Once back at EPFL, Schmale worked with Dada, who is an atmospheric chemist and physicist, to analyze the event data. Dada, the lead author of the study, saw that the air-pollution concentration in the warm air mass exceeded the typically measured values in Zurich. In contrast to particulate matter in the Swiss city, the Arctic air pollution was a lot more acidic, due to sulfuric acid, and contained less nitrate. “It is troubling to see such data in a region where there is no industry or any other comparable source of pollution,” she says. What’s more, analyses of radar data showed that the particles contributed to forming optically thick clouds, which act essentially as opaque blanket, amplifying the temperature increase closer to the ground. This can have important implications for the sea ice melt later in the season.

From the Arctic to mid-latitudes

A key point of the study shows thus that “dirty” intrusions can have a strong effect on the radiation balance of the atmosphere, while “clean” intrusions would behave differently. As a result of climate change, warm intrusion events—like the one observed by the EPFL scientists in the Arctic Ocean in April 2020—have become more frequent and longer lasting. However, little is known about the air pollution concentration, because this is not considered by weather models.

The central Arctic in particular is being affected by these types of events and is at the same time warming three times faster than the rest of the planet. This is causing polar ice to melt at an unprecedented rate, with unforeseeable consequences on ecosystems and atmospheric dynamics that also affect mid-latitudes.