Not just a backup—the dual specificity of UBA6 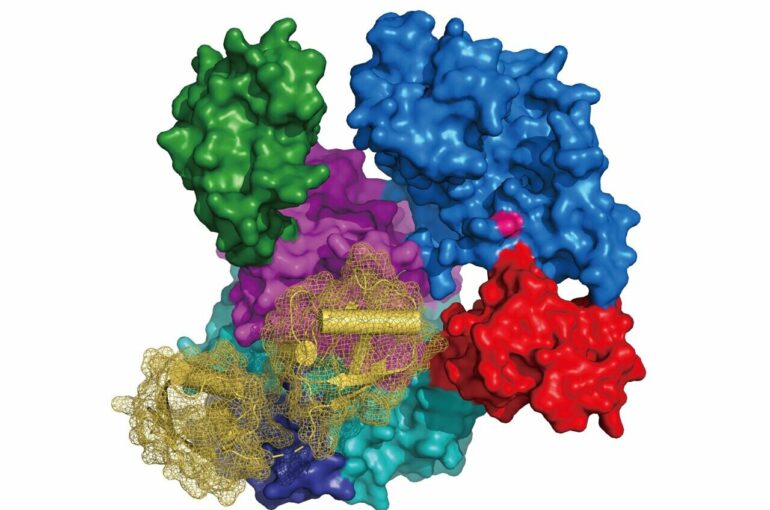 Researchers at the Rudolf Virchow Center of the University of Würzburg have unveiled the crystal structures of UBA6 in complex with either ATP or the ubiquitin-like protein FAT10. These results provide the foundation to study the individual roles of UBA6 towards the attachment of either ubiquitin or FAT10 to target proteins and the downstream cellular pathways with possible implications for the etiology of certain tumors. This study was published in the journal Nature Communications.

Ubiquitylation of target proteins is one of the most important post-translational modifications and plays essential roles in numerous cellular processes. Ubiquitylation is carried out by a sequential enzymatic cascade of E1 activating enzymes, E2 conjugating enzymes and E3 ligating enzymes. For many years UBA1 was thought to be the only E1 enzyme which activates ubiquitin, until in 2007 a second ubiquitin activating enzyme was discovered: UBA6.

A potential target for drug development

UBA6 is only present in vertebrates and sea urchins. Intriguingly, UBA6 is an unusual E1 enzyme as it activates both ubiquitin and the ubiquitin-like protein (Ubl) FAT10. Due to its restricted range of ubiquitylation events, compared to the action of the generic ubiquitin activating enzyme UBA1, and being the sole E1 catalyzing FAT10 attachment, UBA6 is considered to be a potential drug target. To further explore the targeted inhibition of UAB6, it is essential to understand its dual specificity and identify variants of the enzyme which are impaired in either ubiquitin or FAT10 activation.

The research group of Prof Hermann Schindelin at the Rudolf Virchow Center of the University of Würzburg reports the first structures of UBA6, in complex with either ATP or FAT10. Interestingly, their structural and modeling studies also revealed how UBA6 permits the dual recognition of ubiquitin and FAT10. Another key finding is the identification of UBA6 variants which selectively abolish the activation of either ubiquitin or FAT10. “These results provide the foundation to study the individual roles UBA6 is playing in the activation of either ubiquitin or FAT10 in downstream cellular pathways,” says Schindelin.

Since ubiquitylation and FAT10ylation are involved in multiple cellular processes, it is not surprising that malfunctions in one or more components of this system lead to a variety of diseases. UBA6-mediated proteasomal degradation was reported to be involved in brain-associated physiological and pathophysiological states in mice. Interestingly, UBA6 was found to be overexpressed in human brains from patients with Alzheimer’s disease. The tumor suppressor protein p53 is a FAT10 substrate and a double-negative regulation of FAT10 and p53 was observed to be critical in the control of tumorigenesis, which is in line with the overexpression of FAT10 in many cancer cell types.

While predictions regarding the orientation of ubiquitin in complex with UBA6 could be readily generated on the basis of the UBA6-ATP complex structure and available UBA1-Ub structures, it seemed impossible to predict how FAT10 and, in particular, its N-terminal domain (NTD) would interact with UBA6. Hence, the determination of the UBA6-FAT10 co-crystal structure was a crucial step. Based on the experimentally derived structures and the model UBA6-ubiquitin complex, a selectivity switch was identified which led to the subsequent discovery of UBA6 variants selectively abolishing the activation of either modifier.

Future studies of UBA6 with the selectively impaired mutants are needed to investigate possible links between UBA6-catalyzed ubiquitylation and FAT10ylation in the context of cancer. “If causal relationships can be established, the targeted inhibition of UBA6 by enzymatic and in silico-based screening approaches will be conducted,” explains Schindelin. “With the set of mutans which selectively impair ubiquitylation or FAT10ylation we will investigate the selective impairment of either process in cell-based experiments with a particular focus on cancer cells.”

Provided by
University of Würzburg


Citation:
Not just a backup—the dual specificity of UBA6 (2022, September 9)