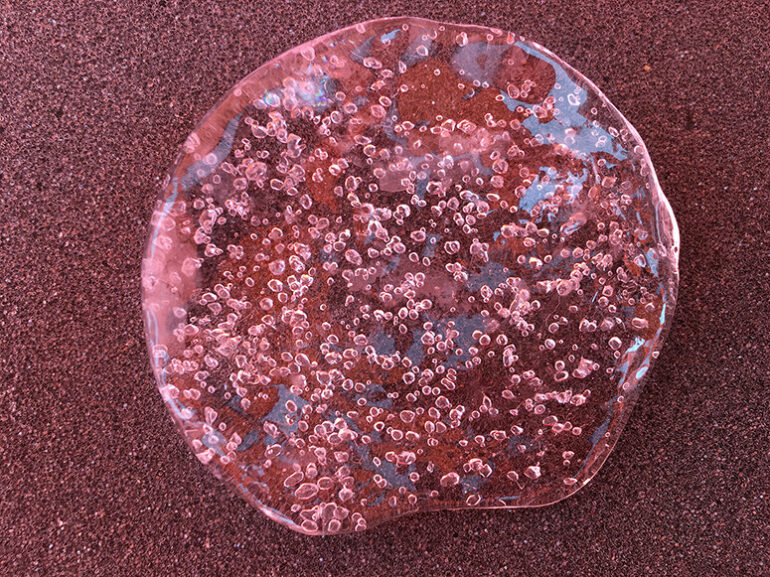 An unknown culprit has been removing oxygen from our atmosphere for at least 800,000 years, and an analysis of air bubbles preserved in Antarctic ice for up to 1.5 million years has revealed the likely suspect.

“We know atmospheric oxygen levels began declining slightly in the late Pleistocene, and it looks like glaciers might have something to do with that,” said Rice University’s Yuzhen Yan, corresponding author of the geochemistry study published in Science Advances. “Glaciation became more expansive and more intense about the same time, and the simple fact that there is glacial grinding increases weathering.”

Weathering refers to the physical and chemical processes that break down rocks and minerals, and the oxidation of metals is among the most important. The rusting of iron is an example. Reddish iron oxide forms quickly on iron surfaces exposed to atmospheric oxygen, or O2.

“When you expose fresh crystalline surfaces from the sedimentary reservoir to O2, you get weathering that consumes oxygen,” said Yan, a postdoctoral research associate in Rice’s Department of Earth, Environmental and Planetary Sciences.

Another way glaciers could promote the consumption of atmospheric oxygen is by exposing organic carbon that had been buried for millions of years, Yan said.

During Yan’s Ph.D. studies in the labs of Princeton University’s Michael Bender and John Higgins, Yan worked on a 2016 study led by Daniel Stolper, now an assistant professor at the University of California, Berkeley, that used air bubbles in ice cores to show the proportion of oxygen in Earth’s atmosphere had declined by about 0.2% in the past 800,000 years.

In the Science Advances study, Yan, Higgins and colleagues from Oregon State University, the University of Maine and the University of California, San Diego, analyzed bubbles in older ice cores to show the O2 dip began after the length of Earth’s glacial cycles more than doubled around 1 million years ago.

The ice age Earth is in today began about 2.7 million years ago. Dozens of glacial cycles followed. In each, ice caps alternately grew, covering up to a third of the planet, and then retreated toward the poles. Each cycle lasted around 40,000 years until about 1 million years ago. At roughly the same time atmospheric oxygen began to decline, glacial cycles began lasting about 100,000 years.

Yan said Earth’s biosphere didn’t contribute to the decline because it is balanced, drawing as much O2 from the atmosphere as it produces. Weathering, on a global scale, is the most likely geological process capable of consuming enough excess O2 to account for the decline, and Yan and colleagues considered two scenarios for increased weathering.

Global sea level falls when glaciers are advancing and rises when they retreat. When the length of glacial cycles more than doubled, so did the magnitude of swings in sea level. As coastlines advanced, land previously covered by water would have been exposed to the oxidizing power of atmospheric O2.

“We did some calculations to see how much oxygen that might consume and found it could only account for about a quarter of the observed decrease,” Yan said.

Because the extent of ice coverage isn’t precisely known for each glacial cycle, there’s a wider range of uncertainty about the magnitude of chemical weathering from glacial erosion. But Yan said the evidence suggests it could draw enough oxygen to account for the decline.

“On a global scale, it’s very hard to pinpoint,” he said. “But we did some tests about how much additional weathering would be needed to account for the O2 decline, and it’s not unreasonable. Theoretically, it could account for the magnitude of what’s been observed.”


Citation:
Air bubbles in Antarctic ice point to a cause of oxygen decline (2021, December 20)