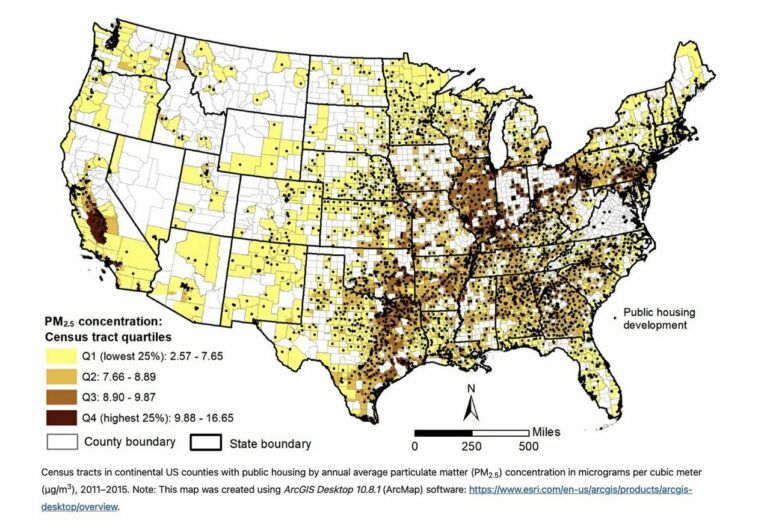 Residents of public housing throughout the United States experience higher levels of air pollution, according to an inter-institutional study led by a researcher from The University of Texas at El Paso that appeared in Scientific Reports.

Chakraborty, founding director of UTEP’s Socio-Environmental and Geospatial Analysis (SEGA) Lab, has studied social inequalities in the distribution of environmental pollution and health hazards for more than 20 years. He said previous research had not examined if public housing developments were located in areas that experienced higher outdoor air pollution. A high percentage of the nation’s public housing residents include minorities, the elderly, people with disabilities or pre-existing health conditions, and others who do not have the resources to address environmental pollution.

The UTEP researcher said that the study showed that public housing in the U.S. is significantly overrepresented in neighborhoods with greater outdoor particulate matter, an inhalable mixture of tiny solids and/or liquid droplets made of various chemicals that are about 3% of the diameter of a human hair. He said their research also found that public housing with high levels of particulate matter had a significantly higher percentage of residents who were Black, Hispanic, disabled and/or extremely low income.

“These findings represent an important starting point for future research and emphasize the urgent need to identify gaps in environmental, public health and housing policies that have contributed to higher air pollution exposures among public housing residents,” Chakraborty said.

The UTEP researcher worked with longtime collaborators from the University of Utah, Timothy W. Collins, Ph.D., professor of geology, and Sara E. Grineski, Ph.D., professor of sociology and environmental studies. Both worked at UTEP from 2006 through 2017. The other team member was Jacob J. Aun, a UTEP graduate student in sociology. The team started to collect the data in July 2021, completed the analysis in January 2022, wrote the article this past spring and submitted it to Scientific Reports in April 2022.

Collins said that exposure to particulate matter can severely affect human health. He said outdoor exposure is responsible for 3% of all deaths and 22% of deaths from environmental causes nationwide.

“Our study is especially relevant today given the fact that the U.S. faces a severe housing crisis, as affordable housing construction has not accommodated a growing financially insecure population,” Collins said. “Access to safe shelter is a basic need that remains unmet for many.”

Grineski said that she has been concerned with the effects of air pollution on public housing residents for more than 15 years.

“I was excited to pursue this study with Dr. Chakraborty to quantitatively assess this issue at a nationwide scale,” Grineski said. “Public housing is an incredibly important and needed public good in the U.S. We need to do better though in terms of improving environmental quality for residents.”

“I hope this article will reach a large number of readers and draw attention to environmental problems faced by public housing residents in the U.S.,” Chakraborty said

Aun, the student researcher, said that he was excited to have been part of the team. He helped with data downloads and analysis, and helped Chakraborty to edit the article.

“It was a great learning experience,” Aun said. “I am very proud of the work that we accomplished and how it contributes to identifying social disparities in air pollution exposure.”

Provided by
University of Texas at El Paso