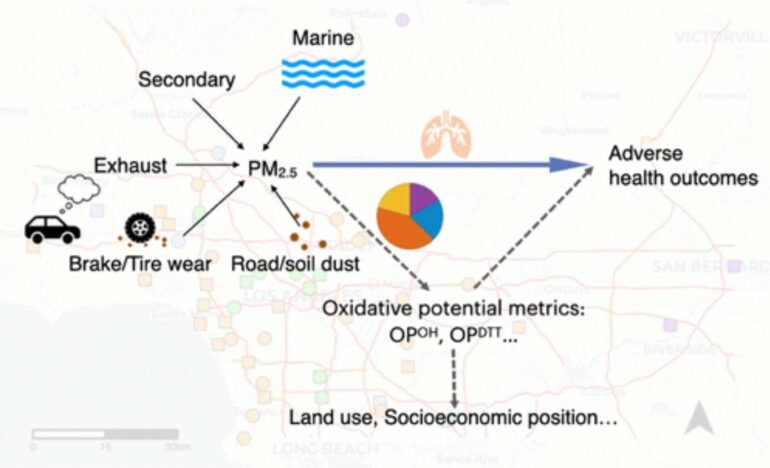 People dealing with the most socioeconomic disadvantages in greater Los Angeles also face higher levels of toxic air pollution, according to a new UCLA-led study.

Researchers collected air samples from 54 locations over two-week periods in September 2019 and February 2020, and then analyzed the samples to determine how much PM 2.5 pollution was present, and how toxic it was. PM 2.5 refers to particles smaller than 2.5 microns, which can penetrate deep into lungs.

The paper, published in the journal Environmental Science & Technology, found that air from census tracts in the 25% of communities facing the most socioeconomic disadvantages not only contained a greater amount of pollution, but that the pollution in these areas was more toxic.

“Overall, people living in these places experience about 65% higher toxicity than people in the most advantaged group,” said Suzanne Paulson, the senior author of the study and a UCLA professor of atmospheric and oceanic sciences.

Air toxicity was measured by its ability to induce oxidative stress. It has long been known that exposure to particles in air pollution contributes to an increased risk for a wide range of cardiovascular, developmental, metabolic and respiratory diseases and conditions. Oxidative stress underlies many of these conditions.

Researchers took samples from four types of locations: near major roadways, in urban communities, in so-called “background” locations away from dense urban development and desert locations in the San Bernardino Valley.

They determined that across all of the areas sampled, 42% of total toxicity came from tailpipe emissions and 21% from brake or tire wear—meaning that a combined 63% of the pollution came from vehicles. Another 20% of the toxicity came from soil dust and 17% was from various other sources—including industrial sites and ports.

Gasoline burns cleaner now thanks to state regulations and research from chemistry experts like Paulson, so the paper’s authors were surprised that tailpipe emissions still represented the largest source of particle toxicity, she said.

Pollution in high-traffic locations was about 50% higher than it was in urban community locations; vehicle-related pollution made up the largest amount of that difference.

Desert locations had slightly lower overall pollution levels than urban community sites, with a much larger proportion of the pollution coming in the form of dust. While it might seem obvious that dust would negatively affect air in desert regions, Paulson said it was important to recognize that much of that dust is contaminated with other particles that make it potentially toxic.

“Dust in urban areas gets mixed in with industrial and tire pollution that is suspended in the dirt,” she said.

The types of pollutants measured in the study significantly correlate with medical conditions such as respiratory, cardiovascular and metabolic illnesses, as well as with low birth weight and other pregnancy-related issues. Pollution that is more toxic typically contains more metals and may contain more toxic organic compounds, although those were not measured in the study.

“Disadvantaged areas can face a situation where the environment is worse, and there is also less access to health care and good nutrition, increasing their health risks,” Shen said.