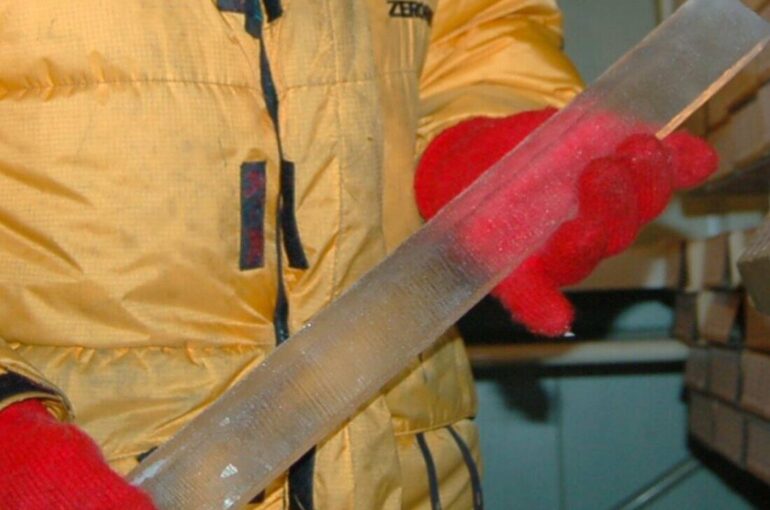 On the massive sheets of ice that stretch across Greenland and Antarctica, the temperature is so low that not even the summer sun can melt the snow deposited onto them. As the snow accumulates without melting and settles deeper into the ice sheet, it traps air from the atmosphere, which forms small air bubbles when the snow transforms into ice. Over centuries or millennia, the ice builds up, increasing the pressure on and dropping the temperature in the bubbles, until the trapped atmospheric molecules convert into cage-like crystals, preserving the ancient air samples for hundreds of thousands of years. These crystals, called air-hydrate crystals, could reveal how the Earth’s atmosphere, and climate, has changed over hundreds of thousands of years—if their composition can be accurately measured.

Previous measurement methods were limited to a couple of elements, such as oxygen and nitrogen. Now, an international research team has developed a new approach to identify more elusive, previously unconfirmed constituents, such as argon, which could help reconstruct a more precise understanding of past climates. They published their approach and their findings, including the first direct discovery of argon in air-hydrate crystals, in the Journal of Glaciology.

“The air bubbles in an ice core are the only known paleoenvironmental archive of the actual ancient atmosphere with a time axis in the depth direction,” said first author Tsutomu Uchida, an Associate Professor in the Faculty of Engineering at Hokkaido University. He explained that argon could be extracted from the ice via melting or cutting, but its location in the undisturbed ice was a mystery. “If we can understand where argon is located in ice, we can improve our understanding of the movement of gas molecules in ice and contribute to improving the accuracy of environmental reconstruction.”

The researchers examined five air-hydrate crystals in an ice core extracted from Greenland and containing ice dating to about 130,000 years ago. They used a combination of scanning electron microscopy and energy-dispersive X-ray spectroscopy to visualize and identify the molecules contained in the air-hydrate crystals. They found argon.

“Argon was assumed to be in the air-hydrate crystals, but was never confirmed directly by microscopic analysis,” said co-author Kumiko Goto-Azuma, a Professor with The Graduate University for Advanced Studies, SOKENDAI, and the National Institute of Polar Research. “Such direct observation is difficult because it has a very small mixing ratio with neighboring elements and it is an inert gas, which makes it hard to measure by the common methods used for nitrogen and oxygen.”

The researchers plan to refine their approach to better understand the distribution of argon in ice with the goal of elucidating the mechanism of changes and more accurately estimating the impact of human activities in the global environment.

“With this new approach, we believe that we can improve the accuracy of ice core analysis to elucidate how much argon existed in the ancient atmosphere and how it has changed with the earth’s environment,” said co-author Tomoyuki Homma, an Associate Professor in the Graduate School of Engineering at Nagaoka University of Technology.