Capturing ocean turbulence at the underbelly of sea ice 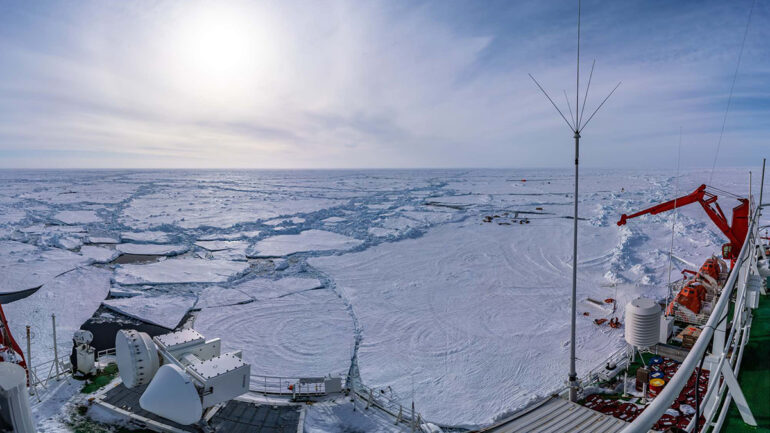 Turbulence in the sea plays a key role in mixing ocean waters and transporting nutrients, heat, and dissolved gases. Sources of ocean turbulence are highly varied and include wind, currents, heating and cooling cycles, and more. The Arctic Ocean features a distinct cause of turbulence: drifting sea ice.

Precise measurements of turbulence are important for understanding ocean dynamics. However, capturing turbulence immediately beneath moving ice poses practical challenges, and conventional methods cannot reliably measure turbulence any closer than a few meters beneath the ice.

Now, Fer et al. demonstrate that a specially designed instrument can quantify turbulence within 1 meter of the ice-ocean interface. An ascending vertical microstructure profiler is dropped through a hole in the ice and lowered to a depth of up to 80 meters. The buoyant instrument then ascends until it reaches the underside of the ice, measuring turbulence along its vertical path.

The researchers used this new instrument as part of the large, international Multidisciplinary Drifting Observatory for the Study of Arctic Climate (MOSAiC) expedition, in which the icebreaker R/V Polarstern spent a full year drifting in the Arctic Ocean while participants carried out numerous research projects.

During the expedition, the researchers captured a total of 167 turbulence measurements from February to September 2020, covering seasonal changes in sea ice cover and drift, as well as varying wind speeds. They found that turbulence varied significantly depending on ice and weather conditions, depth, and location within the Arctic Ocean.

In general, under thicker “pack ice,” turbulence was greater toward the interface of ice and seawater and decreased with depth. However, after strong winds, significant turbulence extended as deep as 20 meters beneath the ice. Some measurements were taken in open waters in the central Arctic; these revealed greater levels of turbulence than seen beneath thin ice cover.

These findings—and future research using similar methods—could help deepen understanding of Arctic ice-ocean dynamics. For instance, they could be applied to refine computational models of ocean mixing beneath ice.