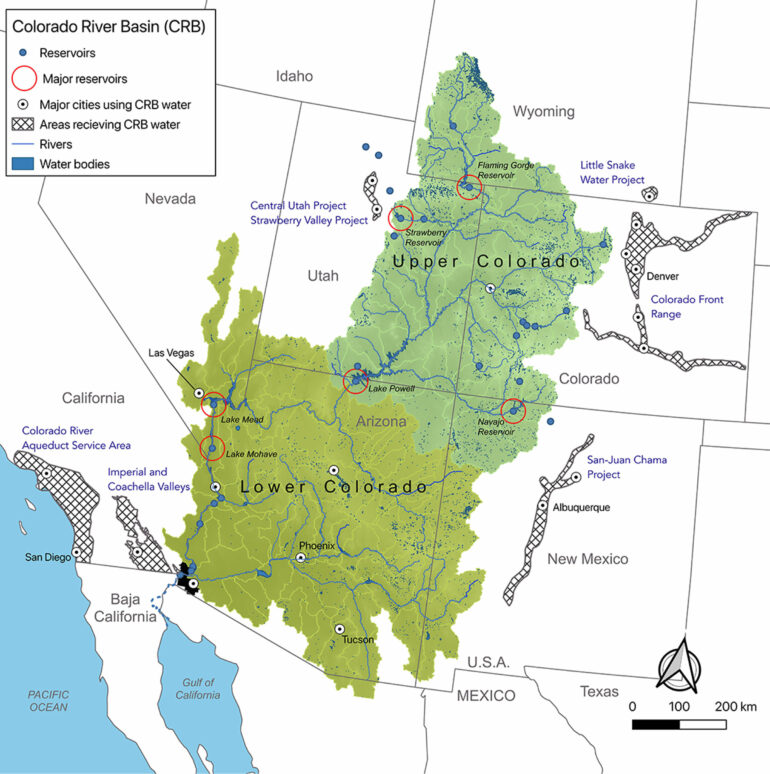 New research predicts that changes in mountain snowmelt will shift peak streamflows to much earlier in the year for the vast Colorado River Basin, altering reservoir management and irrigation across the entire region.

“Because of global climate change, areas of Colorado, Utah and Wyoming could have much less water, and future hydrologic conditions may more closely resemble those of the arid Southwest regions of the basin today,” said Katrina Bennett, a hydrologist at Los Alamos National Laboratory and coauthor of the paper published in the journal Earth and Space Science.

The basin stretches from sea level at the Gulf of California to higher than 14,000 feet in the Rocky Mountains of Colorado and provides critical water to cities and farmers within the basin and beyond. Significant water is diverted to large population centers, including Albuquerque, Denver, Los Angeles, Salt Lake City, San Diego and Santa Fe.

The study by a Los Alamos team using artificial intelligence predicts snowmelt disappearing entirely in some sub-watersheds and large snowpack losses in others.

The team also found that higher-elevation areas of the basin are projected to see a large loss of snowpack as temperatures continue to rise. Particularly in the Rocky Mountains of the upper Colorado River Basin, the team found distinct variations in how much the seasonality and intensity of future runoff will change.

In particular, the study projects more arid conditions in the Green River Valley near the border of Colorado, Utah and Wyoming; mountainous areas in Arizona will see significantly decreased soil moisture.

The modeling isn’t a crystal ball, though.

“We observed significant uncertainty in drought behavior among the several climate models we used,” Bennett said.

Innovative AI pinpoints areas most likely to dry out

One aim of the project was to demonstrate a form of AI called unsupervised machine learning that greatly accelerates analyzing climate and hydrology data, introducing a new tool for sifting through vast data sets to identify key features and trends.

The team derived the drought indicators from historical data and results from simulations of future scenarios by several climate models over a 30-year time period. The AI analyzed the simulation, then automatically pinpointed key sub-watersheds with big expected increases in drought. To manage the enormous resulting data sets, the AI reduced their size for quick processing, identified possible errors and targeted unforeseen responses.

“The AI let us disentangle the complicated relationships in space and time between drought-indicators and the factors that influence them,” Bennett said. “We were able to demonstrate a new capability to automatically isolate where these key indicators contribute to drought and where and how behavior will change in the future.”

The AI approach, called non-negative matrix factorization, has been widely used to automatically extract signals hidden in complex data sets in the earth sciences, astronomy, biology and other disciplines. The technique requires little or no prior knowledge or physical modeling of the system being analyzed.