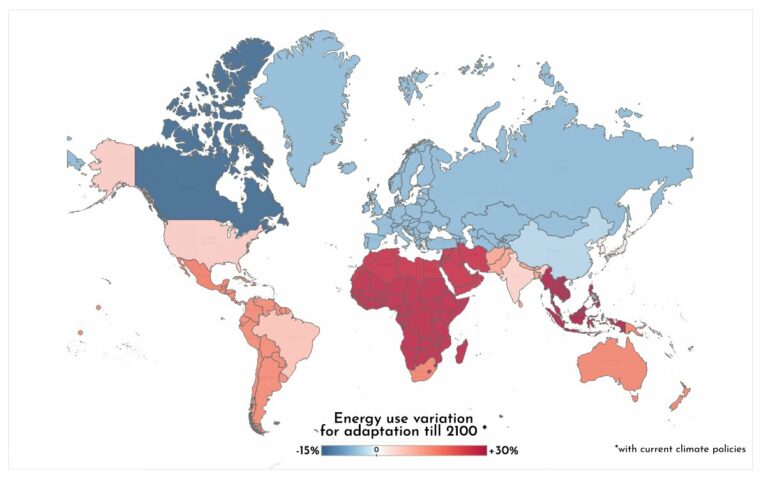 A new study published today in Nature Communications by researchers from the Euro-Mediterranean Center on Climate Change, Ca’ Foscari University of Venice, the European Institute on Economics and the Environment and the London School of Hygiene & Tropical Medicine finds that adapting to climate change will require more energy than previously estimated, leading to higher energy investments and costs. Avoiding this additional energy burden is another important benefit of ambitious mitigation that so far has remained neglected in academia, international negotiations and the public debate.

This new study sheds light on a blind spot of the energy transition and of the implementation of climate policies: adaptation needs will reduce the effectiveness of climate mitigation policy, and it is therefore necessary to revise those policies accounting for the evident changes in climatic conditions. The researchers involved examined how responses to climate change will affect energy systems, and therefore the achievement of mitigation goals, including their economic costs. Estimating the size of future energy needs for adaptation to climate change has important implications for the transition towards sustainability and decarbonized economies.

Francesco Pietro Colelli, lead author of the study, points out that “adapting to climate change by means of adjustments in energy habits, as we did in the past, will increase the global demand for electricity by 7% by 2050 and by 18% in 2100. Since a lot of our energy still comes from coal, gas, and oil, there is a risk such an increase will lead to more physical capital being locked into fossil fuels, corresponding to around 30-35 new large gas-fired plants and 10-15 new large coal- and oil-fired plants each year between now and 2050.”

In Europe, the increase in electricity demand for cooling will be more than compensated by the decrease in fuels demand for heating, leading to a 6% reduction in the final energy demand by the end of the century. Still, between now and 2050, under current climate policies, an additional €235 billion of investments and operational expenses in power generation and transmission are needed to provide the additional electricity needed for cooling.

Enrica De Cian, co-author of the study, and leader of a European ERC project dedicated to the cooling crisis, ENERGYA, explains that “adaptation through air conditioning would also require more resources for grid investments and power generation. Overall electricity generation costs, including investments in capacity, grids, fuel, operation & maintenance costs, will rise by 21% throughout the century. The additional supply-side costs will be passed on to consumers through increases in the price of electricity around 2%-6% due to the adaptation-energy feedback in different regions.”

“Ambitious mitigation policies can cut by more than half the increase in the costs of the energy system induced by adaptation, depending on the stringency of the climate target. Because of the benefits in terms of reduced adaptation needs, the costs to decarbonize the power system in ambitious mitigation scenarios would be lower than previous estimates, and they would turn negative in well-below-2-degree scenarios, pointing at net gains in terms of power system costs.”

Colelli stresses lastly that “adaptation induces variations in the energy markets that ultimately result in a shift in global and regional greenhouse gas emissions of about 7% cumulatively from 2020 to 2100. As a consequence of the variation in emissions, ambitious mitigation pathways see an increase in the global carbon price between 5% and 30%.” This aspect can and should have important implications for the international negotiations on climate change.

By integrating the “adaptation-energy feedback loop” into the World Induced Technical Change Hybrid model—WITCH, the study is one of the first to fully integrate the energy needs for adaptation endogenously into mitigation pathways, so that climate policy design is directly influenced by adaptation energy needs. The findings indicate that climate adaptation can lead to higher energy demand, power system costs and carbon prices, with mitigation’s benefits compensating decarbonization costs.