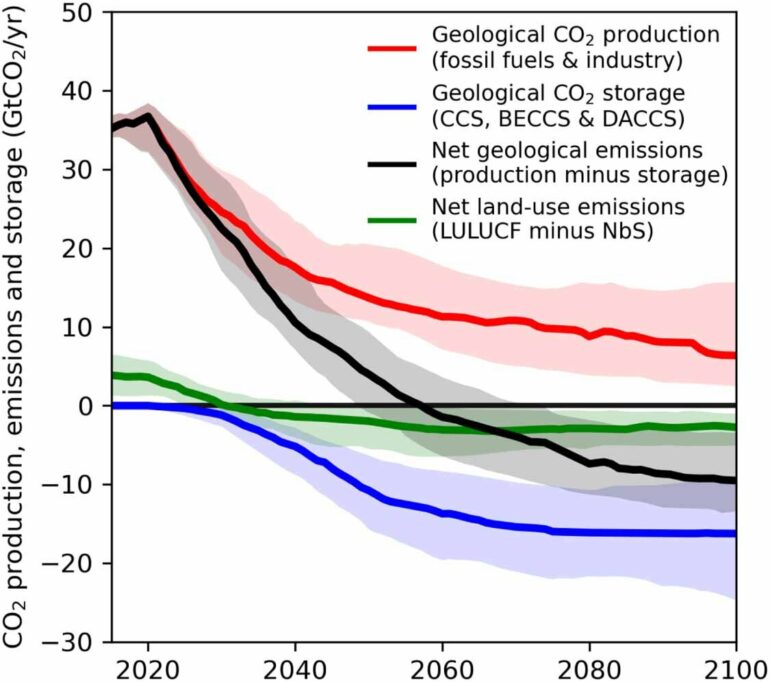 Climate change could be constrained by implementation of policies to ensure fossil fuel producers pay for carbon clear-up, or capture, according to new Oxford-led research, published today in Environmental Research Letters.

They argue carbon capture and storage is an affordable way of ‘stopping fossil fuels from causing further global warming.”

Speaking on Radio 4’sToday Programme this morning, Professor Allen said, “The crucial point about this new paper…is we could stop fossil fuels causing global warming, we could do it in a generation without upending the world economy, but only if we introduce a radical approach to climate policy: this is the idea of extending the principle of producer responsibility to fossil fuels.”

According to the paper, “In the immediate future, if the U.S., Europe and the UK are to reduce dependence on Russian gas by boosting domestic fossil fuel production and LNG imports from suppliers such as the U.S., Qatar or Australia, this should be accompanied by a bold new policy to stop fossil fuels from causing further global warming by 2050.”

Stuart Jenkins, the Oxford researcher and lead author of the paper, maintains, “What we’ve demonstrated is that, if we implement Extended Producer Responsibility (EPR) in combination with other climate solutions, we can protect our energy security while taking meaningful climate action. This is incredibly important at a moment when nations have made it clear that they will prioritize the former over the latter.”

The new paper demonstrates through extensive modeling that implementing EPR can reduce and ultimately prevent further global warming from fossil fuels at an affordable cost relative to conventional solutions. Importantly, EPR would be most effective when applied in combination with conventional solutions, including a carbon price. It would also ensure that the fossil fuel industry, currently making extraordinary profits from high fossil fuel prices, plays its part in addressing the climate challenge

One EPR-based policy is the Carbon Takeback Obligation (CTBO), a requirement that all fossil fuels extracted or imported into a region, nation or group of nations, be offset by storing, back underground, an amount of carbon dioxide equivalent to that generated by that fuel. A CTBO, phased in over time, would reach the requirement of storing 100 percent of emissions by 2050. Unlike a carbon tax, which simply makes polluting more expensive, a CTBO ensures carbon clean-up and makes the cost a part of the cost of fossil fuel production.

The paper demonstrates, EPR works best alongside strong conventional policies which are mostly aimed at reducing demand for fossil fuels, not as a substitute for them. The transition to non-fossil energy sources, while crucial, will not wean us off fossil fuels globally for at least several decades. The goal of EPR is therefore to target the supply side of the equation, to reduce the disastrous impact of any continued fossil fuel use until this transition is entirely completed.

Dr. Cécile Girardin, another Oxford-based co-author, adds, “Nature-based Solutions can play a vital role in accelerating the transition to net zero, with multiple benefits to ecosystems, biodiversity, society, and human well-being. Yet the permanence of biological carbon sinks relies on resilient ecosystems, and limiting peak warming to 1.5C. This is only possible if nature-based solutions for climate change mitigation are implemented in addition to, not instead of, reducing fossil fuel use and scaling up engineered storage at unprecedented rates.”

Professor Allen concludes, “One of the main advantages of this approach is simplicity and transparency: all it would take is a two-line amendment to the Energy Bill currently before the UK Parliament to introduce the principle of applying Extended Producer Responsibility to fossil-origin carbon dioxide.”

“While details such as how fast the ‘take-back fraction’ ramps up can be worked out later—as long as it rises to 100% by 2050. Just opening this conversation would focus minds of investors onto CO2 storage and transform our prospects for achieving net zero by 2050, as well as catapulting the UK back into a position of global climate leadership—all at no cost to the taxpayer. What’s not to love?”