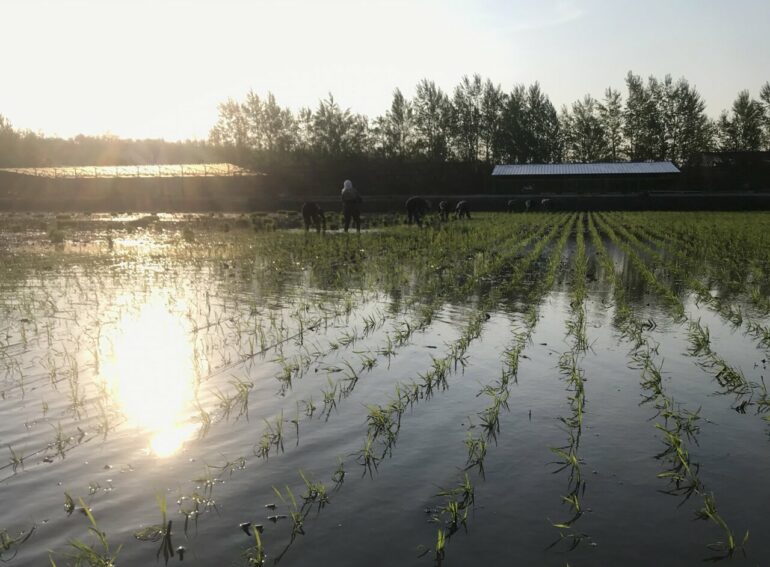 Climate models had until recently not been performing very well predicting variation in the spring rainfall over northeast China, home to some of the country’s main cereal production. This uncertainty potentially puts the food security of the country—and even the world—at risk. Researchers have however now identified the problem: a previously unidentified major shift that occurred in the mid-1980s in atmospheric flows from the North Atlantic as a result of a weakening jet stream.

Their findings are reported in a paper published in the journal Advances in Atmospheric Sciences on August 12.

Northeast China, including Heilongjiang province—the country’s largest grain producer—is one of the country’s major breadbaskets. The area’s agriculture is key to the nation’s basic food self-sufficiency. And sowing season comes in the spring there. As a result, any changes that might be caused by global warming to springtime precipitation in the region will be vital to understand in order to ensure food security for the 1.4 billion people who make the country their home. And if China’s ability to feed itself is threatened, so is that of the rest of the world.

Unfortunately, up until now, climate models have not done a very good job of simulating variability in spring rainfall over northeast China—which also includes the provinces of Jilin, Liaoning, and eastern Inner Mongolia—compared to how well they perform for other areas.

“It had long been thought that the sea-surface temperature over North Atlantic Ocean were closely related to springtime precipitation in northeast China,” said Zhiwei Zhu, lead author of the paper and researcher with the Key Laboratory of Meteorological Disaster at Nanjing University of Information Science and Technology. “But this was too crude an understanding, and seasonal predictions for the northeast China have just been completely off compared to how well models perform seasonal predictions for the rest of the country.”

It may seem far-fetched that sea-surface temperature in the North Atlantic can affect spring rains as far away as northeast China, but such long-distance production of anomalies taking place thousands of kilometers away—termed “teleconnections” by climate scientists and oceanographers—are common both in the atmosphere and the ocean.

An example of such teleconnections are Rossby waves, also called planetary waves, westerly winds that flow in very large wavy patterns meandering from south to north and back again. Rossby waves form as a result of the rotation of the Earth and contribute to the transfer of heat from the tropics to the poles and of cold air to the tropics. A succession of these waves is called a wave train.

“But our predictions based off these teleconnections were somehow wrong,” added Professor Zhu.

In order to better come to grips with what was happening in the northeast China, the researchers produced a fresh analysis considering average monthly precipitation data from gauge stations throughout China and monthly average sea-surface temperatures taken by the US National Oceanic and Atmospheric Administration (NOAA) over a sixty-year period (1961–2020).

They found that there had been a major change in the atmospheric teleconnections between the tropical North Atlantic and northeast Chinese spring rainfall in that time.

Until the mid-1980s, spring rains in the Chinese northeast had been linked to a Rossby wave train that propagated along the westerly jet stream and were coupled to extratropical (mid-latitude) North Atlantic sea surface temperature, not tropical sea-surface temperatures.

Then, in the mid-eighties, there was an abrupt shift, and ever since, northeast Chinese spring rains have been linked to a completely different Rossby wave train that propagate along a great circle route (the shortest route between two points on the surface of a sphere) that is coupled with tropical North Atlantic sea-surface temperatures.

As the atmospheric teleconnections have shifted, so have any anomalous sea-surface temperatures associated with them, and thus altering the origins of the northeast Chinese spring rains.

In essence, they found that the linkage between northeast China spring rainfall and North Atlantic regional sea-surface temperature is unstable, not permanent as had earlier been thought.

This alternating of Rossby wave trains has in turn been caused by a weakening over the decades of the westerly jet stream—narrow bands of strong winds in the upper atmosphere—over North America (Climate scientists have hypothesized that the jet stream may gradually weaken as a result of global warming).

Moving forward, climate scientists need to pay close attention to such decadal shifts, the researchers say, in order to produce better predictions of climate variation for northeast China and perhaps even the whole of northeast Asia in the spring.

Having identified the cause of the of the faulty climate predictions for the region, the researchers now intend to develop a better, decadal-varying seasonal prediction model covering a century-long period.