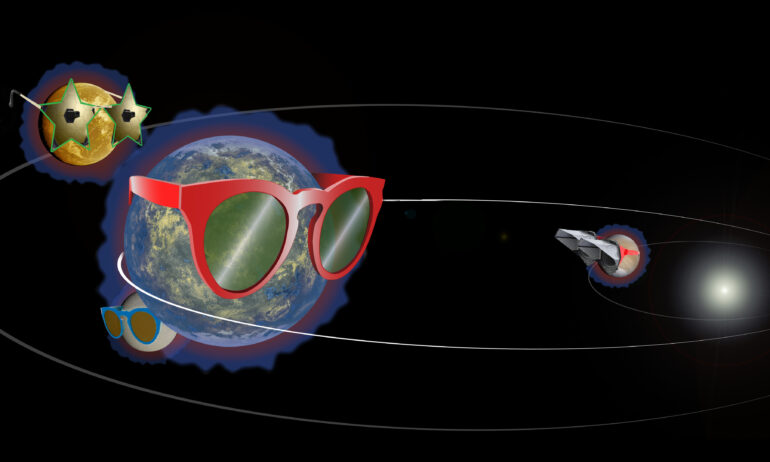 Imagine you go to a theme park with your family and you ask a park employee to take a group photo. A celebrity walks by in the background and waves at the camera, stealing the focus of the photo. Surprisingly, this concept of “photobombing” is relevant to astronomers looking for habitable planets, too.

When scientists point a telescope at an exoplanet, the light the telescope receives could effectively be “contaminated” by light from other planets in the same star system, according to a new NASA study. The research, published in The Astrophysical Journal Letters on Aug. 11, modeled how this “photobombing” effect would impact an advanced space telescope designed to observe potentially habitable exoplanets and suggested potential ways to overcome this challenge.

“If you looked at Earth sitting next to Mars or Venus from a distant vantage point, then depending on when you observed them, you might think they’re both the same object,” explains Dr. Prabal Saxena, a scientist at NASA’s Goddard Space Flight Center in Greenbelt, Maryland, who led the research.

Saxena uses our own solar system as an analog to explain this photobombing effect.

“For example, depending on the observation, an exo-Earth could be hiding in [light from] what we mistakenly believe is a large exo-Venus,” said Dr. Saxena. Earth’s neighbor Venus is generally thought to be hostile to habitability, with surface temperatures hot enough to melt lead—so this mixing could lead scientists to miss out on a potentially habitable planet.

Astronomers use telescopes to analyze light from distant worlds to gather information that may reveal whether they could support life. One light-year, the distance light travels in a year, is almost six trillion miles (over nine trillion kilometers), and there are about 30 stars similar to our Sun within roughly 30 light-years of our solar system.

This photobombing phenomenon, in which observations of one planet are contaminated by light from other planets in a system, stems from the “point-spread function” (PSF) of the target planet. The PSF is an image created due to diffraction of light (the bending or spreading of light waves around an opening) coming from a source and is larger than the source for something very far away (such as an exoplanet). The size of the PSF of an object depends on the size of the telescope aperture (the light-collecting area) and wavelength at which the observation is taken. For worlds around a distant star, a PSF may resolve in such a way that two nearby planets or a planet and a moon could seem to morph into one.

If that is the case, the data that scientists can gather about such an Earth analog would be skewed or affected by whatever world or worlds were photobombing the planet in question, which could complicate or outright prevent the detection and confirmation of an exo-Earth, a potential planet like Earth beyond our solar system.

Saxena examined an analogous scenario in which otherworldly astronomers might be looking at Earth from more than 30 light-years away, using a telescope similar to that recommended in the 2020 Astrophysics Decadal Survey. “We found that such a telescope would sometimes see potential exo-Earths beyond 30 light-years distance blended with additional planets in their systems, including those that are outside of the habitable zone, for a range of different wavelengths of interest,” Saxena said.

The habitable zone is that region of space around a star where the amount of starlight would allow liquid water on a planet’s surface, which may enable the existence of life.

There are multiple strategies to deal with the photobombing problem. These include developing new methods of processing data gathered by telescopes to mitigate the potential that photobombing will skew the results of a study. Another method would be to study systems over time, to avoid the possibility that planets with close orbits would appear in each other’s PSFs. Saxena’s study also discusses how using observations from multiple telescopes or increasing the size of the telescope could reduce the photobombing effect at similar distances.