Current Siberian warming is the most powerful of the last 7,000 years 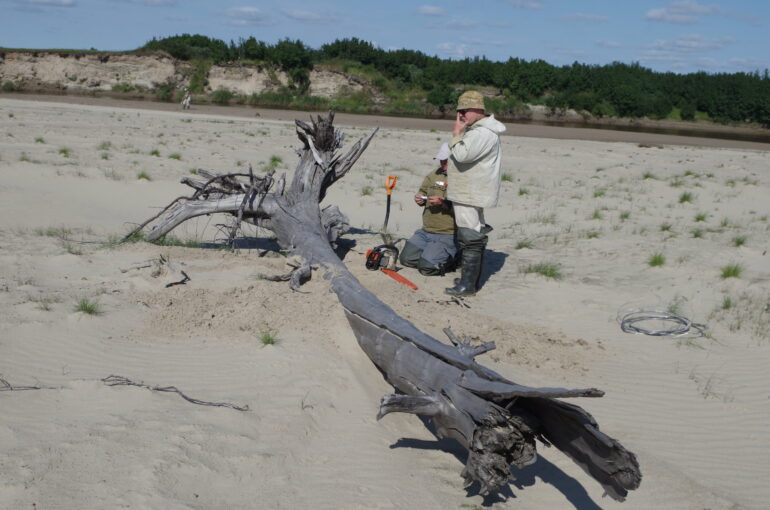 The north of Western Siberia is recording the warmest summers of the last 7,000 years. While for several millennia the temperature of the region was following a general cooling, in the 19th century there has been an abrupt change with rapidly rising temperature that has reached its highest value in the recent decades. These findings were published today in Nature Communications.

Thanks to multiple field expeditions aimed at collecting subfossil wood performed over the last 40 years, dendrochronologists of the Institute of Plant and Animal Ecology, Ural Branch of the Russian Academy of Sciences (RAS), and the Ural Federal University (UrFU), have eventually been able to create a unique and extraordinary-long tree-ring width chronology from the Yamal region allowing to track the course of summer temperature over the past 7,638 years. With support from colleagues of the Climatic Research Unit at the University of East Anglia, of the Swiss Federal Institute for Forest, Snow and Landscape Research, and of the University of Geneva, they have been able to perform analyses to confidently reconstruct and characterize the temperatures over the full period and with annual resolution.

“Due to changes in the Earth’s orbit we would have expected a continuous, slow and gradual decrease of incoming summer solar energy and thus temperature at the subpolar latitudes of the Northern Hemisphere during last 8-9 millennia. However, how recorded by the trees growing in Yamal, this cooling trend has been interrupted in the middle of the 19th century, when temperature began to rise very quickly and reached the highest values in recent decades,” says Rashit Hantemirov, Leading Researcher of the Laboratories of Dendrochronology of the Ural Branch of the RAS and Natural Science Methods in the Humanities of UrFU.

Independently of the period length considered (from 30 to 170 years), the most recent period was the warmest. Not only the temperature has reached unprecedented warm levels, but also the rate of temperature increase (i.e. since the last 160-170) hasn’t been as fast as after the middle of the 19th century.

“The exceptionality of the modern warming is corroborated by observations that the last century was characterized by a total lack of cold extremes contrasted by the occurrence of 27 extreme warm years, 19 of which have fallen in the last 40 years,” specifies Rashit Hantemirov.

The authors of this research are confident that the human activities not only is influence climate change, but has become its major determinant, at least for the north of Western Siberia.

Research on tree-ring based climate reconstruction will continue. There is realistic possibility to extend the tree-ring chronology into the past for another 2,000 years.

“Thank to international cooperation it will also be possible to use other tree-rings parameters to further precise the climate reconstructions. With colleagues from Switzerland, we are working on the analysis of the tree rings cellular structures, and together with the Institute of Geology and Geophysics of the Chinese Academy of Sciences, we intend to perform a climate reconstruction based on the analysis of the oxygen-18 isotope in the annual rings,” adds Rashit Hantemirov.

Stepan Shiyatov, a pioneer of dendrochronology in Russia, was the first who recognized the value of the ancient trees found on the Yamal Peninsula. Together with colleagues from the Institute of Plant and Animal Ecology, Ural Branch of the Russian Academy of Sciences, he began 40 years ago with the systematic collections of the subfossil wood. Since then, more than two dozen expeditions have been carried out; with a current collection of more than 5,000 samples, which tree-ring widths have been measured, and which samples are currently archived at the Institute of Plant and Animal Ecology.

Approximately 2,000 samples of larch and spruce subfossils have also been dated (with the cross-dating method). This allowed to assign with absolute accuracy the year of formation of each annual ring over the last 8,800 years, being now the longest tree-ring chronology of the polar regions.

Tree rings are one of the best natural archives of past growing conditions (including air temperature). Trees growing in subpolar regions and at high elevation are usually the most sensitive to temperature changes. Remains of such trees that lived thousands of years ago, as in the Yamal Peninsula, provide the access to understand the past, which is the best foundation to assess the future.