From the soil to the sky: Researchers quantify the amount of energy that plants use to lift water on a global scale 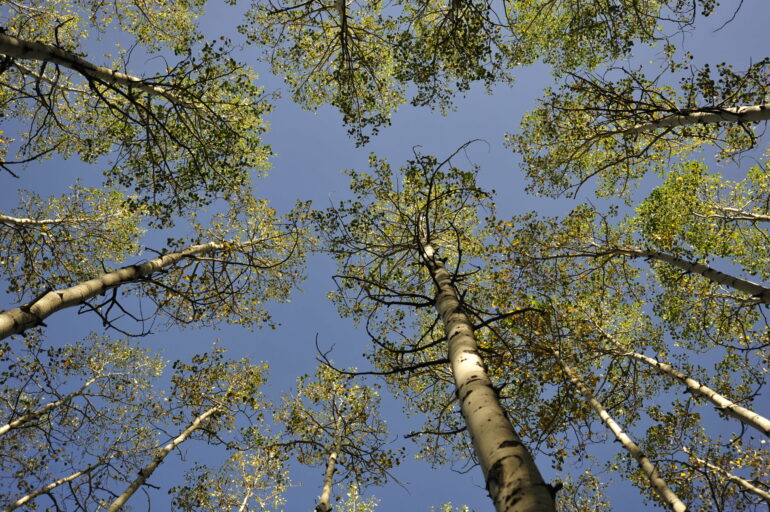 Every day, about one quadrillion gallons of water are silently pumped from the ground to the treetops. Earth’s plant life accomplishes this staggering feat using only sunlight. It takes energy to lift all this liquid, but just how much was an open question until this year.

Researchers at UC Santa Barbara have now calculated the tremendous amount of power used by plants to move water through their xylem from the soil to their leaves. They found that on average, it was an additional 14% of the energy the plants harvested through photosynthesis. On a global scale, this is comparable to the production of all of humanity’s hydropower. Their study, published in the Journal of Geophysical Research: Biogeosciences, is the first to estimate how much energy goes into lifting water up to plant canopies, both for individual plants and worldwide.

“It takes power to move water up through the xylem of the tree. It takes energy. We’re quantifying how much energy that is,” said first author Gregory Quetin, a postdoctoral researcher in the Department of Geography. This energy is in addition to what a plant produces via photosynthesis. “It’s energy that’s being harvested passively from the environment, just through the tree’s structure.”

Photosynthesis requires carbon dioxide, light and water. CO2 is widely available in the air, but the other two ingredients pose a challenge: Light comes from above, and water from below. So, plants need to bring the water up (sometimes a considerable distance) to where the light is.

More complex plants accomplish this with a vascular system, in which tubes called xylem bring water from the roots to the leaves, while other tubes called phloem move sugar produced in the leaves down to the rest of the plant. “Vascular plants evolving xylem is a huge deal that allowed for trees to exist,” Quetin said.

Many animals also have a vascular system. We evolved a closed circulatory system with a heart that pumps blood through arteries, capillaries and veins to deliver oxygen and nutrients around our bodies. “This is a function that many organisms pay a lot for,” said co-author Anna Trugman, an assistant professor in the Department of Geography. “We pay for it because we have to keep our hearts beating, and that’s probably a lot of our metabolic energy.”

Plants could have evolved hearts, too. But they didn’t. And it saves them a lot of metabolic energy.

In contrast to animals, plant circulatory systems are open and powered passively. Sunlight evaporates water, which escapes from pores in the leaves. This creates a negative pressure that pulls up the water beneath it. Scientists call this process “transpiration.”

In essence, transpiration is merely another way that plants harvest energy from sunlight. It’s just that, unlike in photosynthesis, this energy doesn’t need to be processed before it can be put to use.

Scientists understand this process fairly well, but no one had ever estimated how much energy it consumes. “I’ve only seen it mentioned specifically as energy in one paper,” co-author Leander Anderegg said, “and it was to say that ‘this is a really large number. If plants had to pay for it with their metabolism, they wouldn’t work.'”

This particular study grew out of basic curiosity. “When Greg [Quetin] and I were both graduate students, we were reading a lot about plant transpiration,” recalled Anderegg, now an assistant professor in the Department of Ecology, Evolution, and Marine Biology. “At some point Greg asked, ‘How much work do plants do just lifting water against gravity?'”

“I said, ‘I have no idea. I wonder if anyone knows?’ And Greg said, ‘Surely we can calculate that.'”

About a decade later, they circled back and did just that. The team combined a global database of plant conductance with mathematical models of sap ascent to estimate how much power the world’s plant life devotes to pumping water. They found that the Earth’s forests consume around 9.4 petawatt-hours per year. That’s on par with global hydropower production, they quickly point out.

Surprisingly, the researchers discovered that fighting gravity accounts for only a tiny fraction of this total. Most of the energy goes into simply overcoming the resistance of a plant’s own stem.

These findings may not have many immediate applications, but they help us better understand life on Earth. “The fact that there’s a global energy stream of this magnitude that we didn’t have quantified is mildly jarring,” Quetin said. “It does seem like a concept that slipped through the cracks.”

The energies involved in transpiration seem to fall in between the scales that different scientists examine. It’s too big for plant physiologists to consider and too small for scientists who study Earth systems to bother with, so it was forgotten. And it’s only within the past decade that scientists have collected enough data on water use and xylem resistance to begin addressing the energy of transpiration at global scales, the authors explained.

Within that time, scientists have been able to refine the significance of transpiration in Earth systems using new observations and models. It affects temperatures, air currents and rainfall, and helps shape a region’s ecology and biodiversity. Sap ascent power is a small component of transpiration overall, but the authors suspect it may turn out to be noteworthy given the significant energy involved.

It’s still the early days, and the team admits there’s a lot of work to do in tightening their estimates. Plants vary widely in how conductive their stems are to water flow. Compare a hardy desert juniper with a riverside cottonwood, for instance. “A juniper tree that is very drought-adapted has a very high resistance,” Anderegg said, “while cottonwoods just live to pump water.”

This uncertainty is reflected in the authors’ estimates, which fall between 7.4 and 15.4 petawatt-hours per year. That said, it could be as high as 140 petawatt-hours per year, though Quetin admits this upper bound is unlikely. “I think this uncertainty highlights that there is still a lot we don’t know about the biogeography of plant resistance (and to a lesser extent, transpiration),” he said. “This is good motivation for continued research in these areas.”


Citation:
From the soil to the sky: Researchers quantify the amount of energy that plants use to lift water on a global scale (2022, September 7)