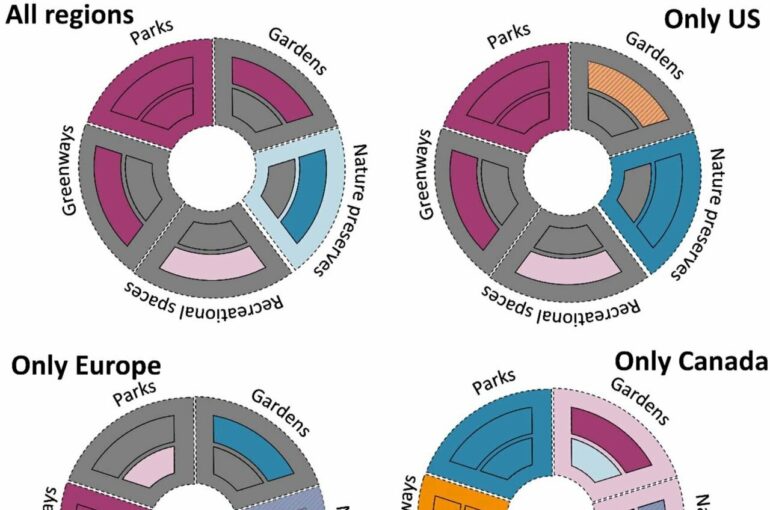 Cities creating or restoring greenspaces experience gentrification processes that exclude citizens from more vulnerable social groups. This is the finding of a scientific project by the Institute of Environmental Science and Technology of the Universitat Autònoma de Barcelona (ICTA-UAB) led by urban planner and geographer Isabelle Anguelovski, who has spent over six years analyzing the characteristics and consequences of greening processes in 28 cities in Europe and North America.

Green gentrification occurs in cities where municipal greening strategies are implemented and is the process whereby the original population of a lower-middle or lower class neighborhood is displaced by new residents with higher purchasing power who arrive to this area because they were attracted by the proximity of new parks and green spaces and the offer of more attractive housing.

As a result, rental and housing prices substantially increase so that the most vulnerable groups cannot cope with the prices and must move to other less attractive neighborhoods with a lower quality of life.

Through their Greenlulus (Green Locally Unwanted Land Uses) project, Isabelle Anguelovski and her team have shown that, despite proven socio-economic, climatic and health benefits of green spaces for the population, large inequalities exist in their distribution and access.

The results, obtained from an analysis of the real estate market and socio-demographic conditions of 28 cities in nine countries in Europe and North America and published, among others, in the journal Nature Communications, reveal that the planning of green spaces boosted gentrification processes in 17 of the cities analyzed.

The study also shows that green gentrification is more prevalent in North American cities than in European cities, probably due to the absence of strong social policies against population displacement, which are more common in Europe, and less control over real estate development. Part of the results have also been compiled in a documentary coordinated by the team and filmed by Alberto Bougleux, The Green Divide.

Another study developed within the framework of the project by researcher Margarita Triguero Mas and published in Environmental Research Letters states that while in the United States parks and urban gardens tend to have a stronger gentrification potential, in Europe, recreational areas and green corridors are the main elements that favor the escalation of prices and the exclusion of residents with fewer resources.

“In the United States or Canada, there is an aesthetization of gardens, which are larger, maintained, organized, and marketed by real estate developers to raise the price of the surroundings,” explains Anguelovski.

“We have been able to corroborate our initial hypothesis that greener cities become more unequal and inequitable,” she explains while stressing that this strong relationship between the greening of municipalities in the 1990s-2000s and the gentrification that occurred in the 2010s has been demonstrated.

“We find green infrastructures that can be more disruptive than therapeutic for health. The research also shows how green gentrification contributes to the socio-cultural exclusion of vulnerable residents, especially immigrants and racialized people,” adds Anguelovski.

Cities with lead gentrification processes include Atlanta, Copenhagen, Montreal, Nantes or Vancouver, where greening took place on a large scale and with a strong green rhetoric on behalf of developers and city officials.

Atlanta is the host of the emblematic 53 km Beltline, which will eventually link 45 neighborhoods and is accompanied by new and rejuvenated parks built since the early 2000s. Nantes, with a series of green axes along its two rivers, bordering small and large parks, has since the early 2010s branded itself “The City in a Garden” and has a strong national and international marketing policy on its green trajectory, especially since receiving the Green Capital Award in 2013.

For example, the most recent green gentrification in Barcelona has taken place in Sant Martí (eastern part of the city), a post-industrial area partially rebranded as the [email protected] district, oriented towards technology, innovation, and climate resilience. This process also affected the regenerated Old Town (Ciutat Vella) in the 2010s and has intensified in the upper-income district of Sarrià-Sant Gervasi.

In Boston, several development projects which started in the mid-2000s are located along the self-branded “climate-adaptive” waterfronts of East Boston, Seaport District, South Boston and North and South Dorchester. More recently they have been framed within the 2018 Boston Harbor Plan and its vision for a city resilient to sea level rise and flooding.

The third group of cities includes Detroit, Philadelphia and Washington D.C. “In these cities, gentrification is present but greening perhaps plays a more secondary role than other interventions such as, for example, in the case of Detroit, residential development, or in Washington, commercial development, especially in historically black neighborhoods,” argues Anguelovski.

The case of Valencia stands out because, despite the incredible amount of development experienced during the economic boom from 1990 to 2000, gentrification in the city is more linked to regeneration programs and the arrival of the high-speed train. Valencia prioritized smaller green spaces, perhaps with less gentrification impact, such as the Parcs de Barris.

“These results do not mean that green infrastructure is negative, quite the contrary, as it has been shown to have enormous benefits for physical and mental health. The problem is the lack of prioritization of issues of equity and justice in green urban planning,” says Anguelovski, who reminds us that what is needed is for city councils to be aware of this and to accompany this process with policies that control property speculation in the area, promote social housing developments, limit short-term rental licenses and/or encourage the creation of support networks between neighbors, local businesses, and the protection of more informal green spaces.

She also highlights the importance of homogenizing and extending this type of space throughout the city with small parks, pedestrian streets, green roofs or public promotion of urban agriculture in underused areas.