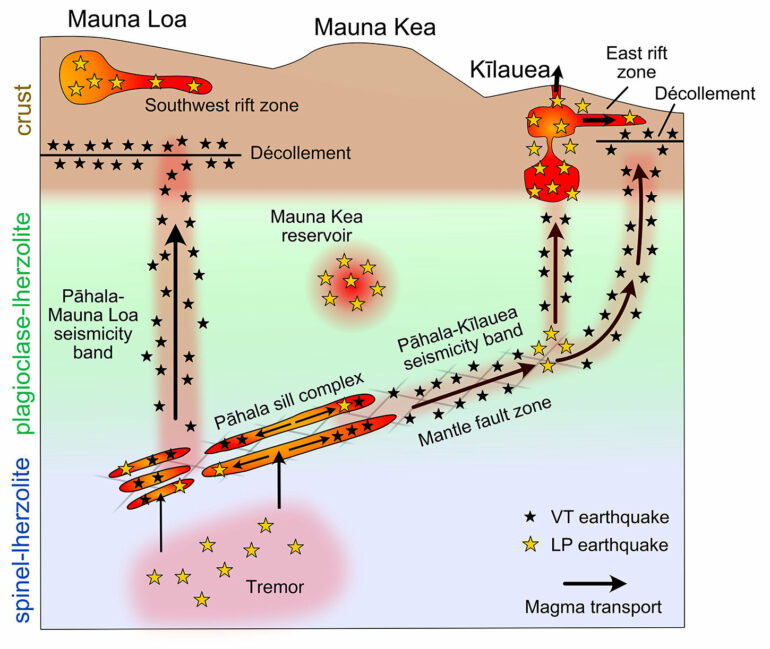 Magma pumping through a massive complex of flat, interconnected chambers deep beneath volcanoes in Hawai’i appears to be responsible for an unexplained swarm of tiny earthquakes felt on the Big Island over the past seven years, in particular since the 2018 eruption and summit collapse of Kīlauea.

The pancake-like chambers, called “sills,” channel magma laterally and upward to recharge the magma chambers of at least two of the island’s active volcanoes: Mauna Loa and Kīlauea. Using a machine-learning algorithm, geoscientists at Caltech were able to use data gathered from seismic stations on the island to chart out the structure of the sills, mapping them with never-before-seen precision and demonstrating that they link the volcanoes.

Further, the researchers were able to monitor the progress of the magma as it pushed upward through the sills, and to link that to Kīlauea’s activity. They analyzed a period that ended in May 2022, so it is not yet possible to say whether they can spot the magma flow that led to the November 27 eruption of Mauna Loa, but the team intends to look at that next.

“Before this study, we knew very little about how magma is stored and transported deep beneath Hawai’i. Now, we have a high-definition map of an important part of the plumbing system,” says John D. Wilding, Caltech graduate student and co-lead author of a paper describing the research that was published in the journal Science on December 22.

The study represents the first time scientists have been able to directly observe a magma structure located this deep underground. “We know pretty well what the magma is doing in the shallow part of the system above 15 kilometer depth, but until now, everything below that has just been the subject of speculation,” Wilding says.

With data on more than 192,000 small temblors (less than magnitude 3.0) that occurred over the 3.5-year period from 2018 to mid-2022, the team was able to map out more than a dozen sills stacked on top of one another. The largest is about 6 kilometers by 7 kilometers. The sills tend to be around 300 meters thick, and are separated by a distance of about 500 meters.

“We are excited about recent advances in machine learning, particularly deep learning, which are helping to accurately detect and locate these small seismic signals recorded by dense seismic networks. Machine learning can be an effective tool for seismologists to analyze large archived datasets, identify patterns in small earthquakes, and gain insights into underlying structures and physical mechanisms.”

Wilding and Zhu worked with Jennifer Jackson, the William E. Leonhard Professor of Mineral Physics; and Zachary Ross, assistant professor of geophysics and William H. Hurt Scholar; who are both senior authors on the paper.

The team did not have to place a single piece of hardware to do the study; rather, they relied on data gathered by United States Geological Survey seismometers on the island. However, the machine-learning algorithm developed in Ross’s lab gave them an unprecedented ability to separate signal from noise—that is, to clearly identify earthquakes and their locations, which create a sort of 3D “point cloud” that illustrates the sills.

“It’s analogous to taking a CT [computerized tomography] scan, the way a doctor can visualize the inside of a patient’s body,” Ross says. “But instead of using controlled sources with X-rays, we use passive sources, which are earthquakes.”

The team was able to catalog about 10 times as many earthquakes as was previously possible, and they were able to pinpoint their locations with a margin of error of less than a kilometer; previous locations were determined with error margins of a few kilometers. The work was accomplished using a deep-learning algorithm that had been taught to spot earthquake signals using a training dataset of millions of previously identified earthquakes.

Even with small earthquakes, which might not stand out to the human eye on a seismogram, the algorithm finds patterns that distinguish quakes from background noise. Ross had previously used the technique to reveal how a naturally occurring injection of underground fluids drove a four-year-long earthquake swarm near Cahuilla, California.

The sills appear to be at depths ranging from around 36-43 kilometers. (For reference, the deepest humans have ever drilled into Earth is a little over 12 kilometers.) Scientists have long known that a phase boundary is present at a depth of around 35 kilometers beneath Hawai’i; at such a phase boundary, rock of the same chemical composition transitions from one group of minerals above to a different group below.

Studying the new data, Jackson recognized that the transitions occurring in this rock coupled to magma injections could host chemical reactions and processes that stress or weaken the rock, possibly explaining the existence of the sills—and by extension, the active seismicity.

“The transition of spinel to plagioclase within the lherzolite rock may be occurring through diffuse migration, entrapment, and crystallization of magma melts within the shallow lithospheric mantle underneath Hawai’i,” Jackson says.

“Such assemblages can exhibit transient weakening arising from coupled deformation and chemical reactions, which could facilitate crack growth or fault activation. Recurrent magma injections would continuously modulate grain sizes in the sill complex, prolonging conditions for seismic deformation in the rock. This process could exploit lateral variations in strength to produce and sustain the laterally compact seismogenic features that we observe.”

It is unclear whether the sills beneath the Big Island are unique to Hawai’i or whether this sort of subvolcanic structure is common, the researchers say. “Hawai’i is the best-monitored island in the world, with dozens of seismic stations giving us a window into what’s going on beneath the surface. We have to wonder, at how many other locations is this happening?” Wilding says.

Also unclear is exactly how the magma’s movement triggers the tiny quakes. The earthquakes map out the structures, but the actual mechanism of earthquakes is not well understood. It could be that the injection of a lot of magma into a space creates a lot of stress, the researchers say.