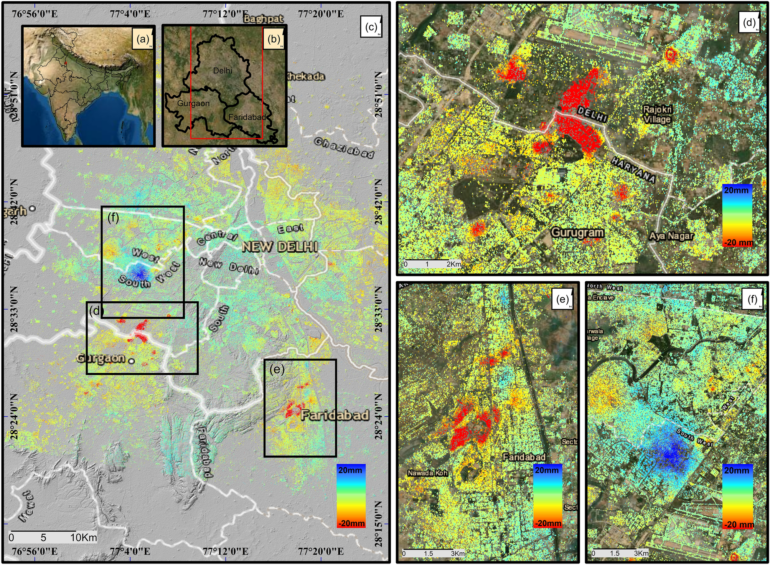 Using satellite data, researchers have found that around 100 sq km in and around Delhi has high risk of land subsidence. Groundwater extraction is causing parts of the city to sink, with the largest area experiencing subsidence just 800m away from Delhi international airport.

Land subsidence is a severe often overlooked geological hazard and is a widespread global problem. It can be attributed to underground extraction of minerals, oil, gas and water, as well as natural events such as soil compaction, earthquake, and loess deposits. According to U.S. Geological Survey, more than 80% of land subsidence across the world is caused due to excessive groundwater extraction. When water is extracted from aquifers, the clay between pockets of water collapse gradually, leading to land subsidence.

A study titled “Tracking hidden crisis in India’s capital from space: implications of unsustainable groundwater use,” published in Scientific Reports co-authored by researchers from IIT Bombay, German Research Centre for Geosciences, University of Cambridge and the Southern Methodist University US have found that the rate of land subsidence near Delhi airport is accelerating rapidly.

During the years 2014–2016, the subsidence was found to be approximately 11cm/year which rose significantly by almost 50% over the next two years to around 17cm/year. The trend remained almost the same during 2018–2019, the study found.

“Of all the areas that are under threat, Kapashera near the airport was the most vulnerable because the subsidence rate is extremely high” said Shagun Garg, a doctoral researcher in the EPSRC Centre for Doctoral Training in Future Infrastructure and Built Environment: Resilience in a Changing World (FIBE2) who is part of the project team.

“The airport requires stable ground because of the risk of major disruption if there’s significant ground movement,” Garg said. “Kuala Lumpur airport is an example to understand the implications of land subsidence where cracks on taxiways, and water-logging emerged due to soil settlement. Continuous monitoring of Delhi International airport and its connecting roads is therefore crucial.”

The growing population expansion and urbanization require an enormous amount of water to fulfill the demand. There is a huge gap of 750 million liters a day between the demand and the supply. Millions of residents do not have access to a piped water supply and rely on groundwater for their daily needs. In some places, the water depth is as high as 120m below ground level. The groundwater shortage is further complicated by Delhi’s unchecked urbanization, which is disrupting the rejuvenation of the city’s aquifers. Concrete and other infrastructure have overtaken the city, blocking rainwater from absorbing into the ground.

Rainwater harvesting is one solution to the problem. Delhi receives an average annual rainfall of 611mm, mostly in July, August, and September. Harvesting rainwater will not only bridge the gap between demand and supply but will also replenish the falling groundwater levels. The groundwater recharge can reduce the increasing rate of land subsidence and can mitigate the risk associated with subsidence.

The Indian Central Ground Water Authority in December 2018, introduced “Water Conservation Fees’ for groundwater extraction for domestic and industrial purposes. The fee varies depending on the amount of extraction and the exploited zone (highest for overexploited, critical, and semi-critical blocks). However, it exempts individual households and agricultural users (the largest user of groundwater). Moreover, the current policies are solely based on mitigating the water scarcity problem and do not take into account the hazardous effect of land subsidence.

Despite its slow pace, land subsidence is known to cause losses worth billions of dollars all over the world due to damage to infrastructure, roads, pavements, and underground utilities such as drainage systems, aggravated flood risks and more frequent water-logging.

Can subsidence be reversed? Garg said that a detailed hydro-geological study is required to understand aquifer properties as current available data are limited.

“The Central Ground Water Board, the Geological Survey of India, and the Ministry of Urban Affairs need to investigate whether these trends are reversible,” he said. “We suggest the government and policymakers should have a detailed understanding of the geophysical properties of the areas undergoing subsidence, and incentivize rainwater harvesting while ensuring strict implementation of laws against illegal mining of groundwater. The building conditions in hazard zones should be evaluated and proper measures should be taken.”