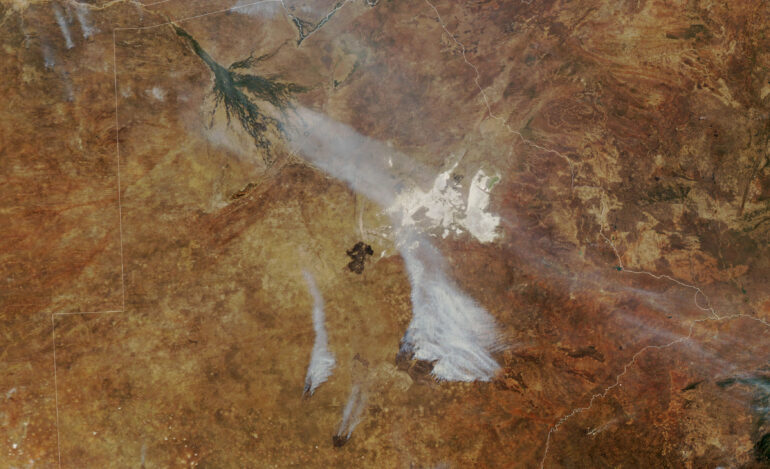 Large wildland fires commonly burn in sub-Saharan Africa from August to October, late in the dry season. In Botswana, a period of quiet fire activity in early August 2022 was short lived as several active blazes filled the sky with smoke by mid-month.

Some of the country’s larger, smokier fires are visible in this image, acquired on August 14, 2022, by the Moderate Resolution Imaging Spectroradiometer (MODIS) on NASA’s Aqua satellite. The fires burned within and just outside the Central Kalahari and Khutse game reserves.

Wildland fires can be spotted burning in the region each year starting around April. But they tend to grow larger and more intense starting in August, fueled by dried out vegetation and fanned by strong winds. According to the Botswana Meteorological Services, the fire danger index across the country on August 14 topped the scale at “very dangerous” to “extremely dangerous.” This means that any instance of fire could spread rapidly and be difficult to control.

On the day of this image, MODIS detected very little fire activity around the Okavango Delta, where pulses of floodwater help grow vegetation (green) that, on occasion, burns. Instead, most of the smoke pictured here is from fires burning in the game reserves, where the vegetation is primarily open shrubland and grassland.

Research has shown that the Ghanzi District, which includes the Central Kalahari Game Reserve, tends to see some of the largest fires in Botswana. Between 2006 and 2017, fire burned more than 25 million square kilometers (9.7 million square miles), more than in any other district during this period. One particularly notable year was 2008, when fires burned about 80 percent of the reserve.