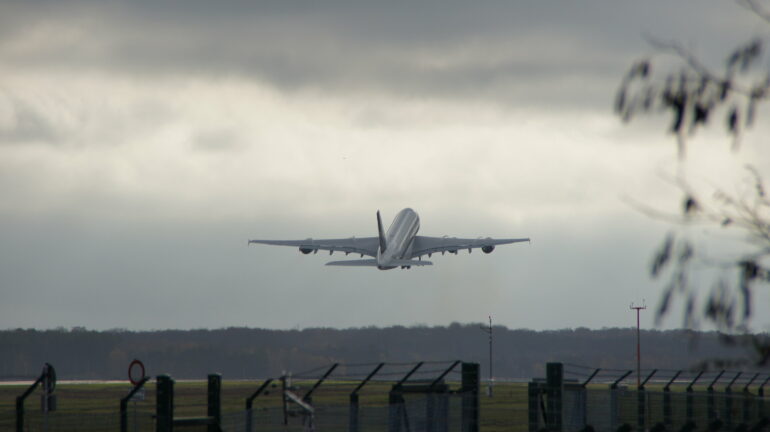 Ultrafine particles form during combustion processes, for example, when wood or biomass is burned, as well as in power-generating and industrial processes. Alongside road traffic, large airports are a major source of these ultrafine particles, which are less than 100 millionths of a millimeter (100 nanometers) in size. Because they are so small, they can penetrate deep into the lower respiratory tract, overcome the air-blood barrier and, depending on their composition, cause inflammatory reactions in the tissue, for example. What’s more, ultrafine particles are suspected of being capable of triggering cardiovascular diseases.

For several years, the Hessian Agency for Nature Conservation, Environment and Geology (HLNUG) has been measuring the number and size of ultrafine particles at air monitoring stations in the vicinity of Frankfurt International Airport, for example, in the Frankfurt suburb of Schwanheim and in Raunheim. Last year, scientists led by Professor Alexander Vogel at Goethe University Frankfurt analyzed the chemical composition of the ultrafine particles and came across a group of organic compounds which, according to their chemical fingerprints, originated from aircraft lubrication oils.

The research team has now corroborated this finding by means of further chemical measurements of the ultrafine particles: They originated to a significant degree from synthetic jet oils and were particularly prevalent in the smallest particle classes, i.e., particles 10 to 18 nanometers in size. Such lubrication oils can enter the exhaust plume of an aircraft’s engines, for example, through vents where nanometer-sized oil droplets and gaseous oil vapors are not fully retained.

In laboratory experiments, the researchers also succeeded in reproducing the formation of ultrafine particles from lubrication oils. To this end, a common engine lubrication oil was first evaporated at around 300 °C in a hot gas stream, which simulated the exhaust plume of an aircraft engine, and subsequently cooled down. The number-size distribution of the freshly formed particles was then measured.

Alexander Vogel, professor for atmospheric environmental analytics at the Institute for Atmospheric and Environmental Sciences of Goethe University Frankfurt, explains, “When the oil vapor cools down, the gaseous synthetic esters are supersaturated and form the nuclei for new particles that can then grow fast to around 10 nanometers in size.

“These particles, as our experiments indicate, constitute a large fraction of the ultrafine particles produced by aircraft engines. The previous assumption that ultrafine particles originate primarily from sulfur and aromatic compounds in kerosene is evidently incomplete. According to our findings, lowering lubrication oil emissions from jet engines holds significant potential for reducing ultrafine particles.”

The experiments show that the formation of ultrafine particles in jet engines is not confined to the combustion of kerosene alone. Potential mitigation measures should take this into consideration. This means that using low-sulfur kerosene or switching to sustainable aviation fuel cannot eliminate all the pollution caused by ultrafine particles.

The work is published in the journal Communications Earth & Environment.

A comprehensive scientific study by the Federal State of Hesse, which will start in 2023, will examine pollution from ultrafine particles and their impact on health. In this context, the results from the current study can help to identify airport-specific particles and derive possible mitigation measures.

A strong breeze and chance of storms: A wind forecast from 10,000 years ago