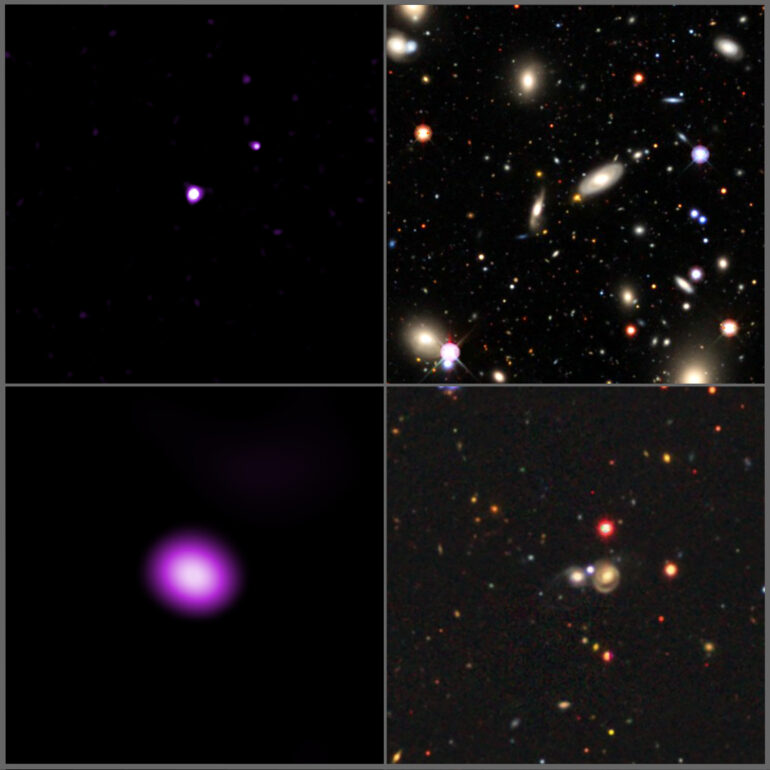 Hundreds of black holes previously hidden, or buried, have been found using NASA’s Chandra X-ray Observatory. This result helps give astronomers a more accurate census of black holes in the universe.

The black holes in this new study are the supermassive variety that contain millions or even billions of times the mass of the sun. While astronomers think that almost all large galaxies harbor giant black holes in their centers, only some of the black holes will be actively pulling in material that produces radiation, and some will be buried underneath dust and gas.

By combining data from the Chandra Source Catalog—a public repository including hundreds of thousands of X-ray sources detected by the observatory over its first 15 years—and optical data from the Sloan Digital Sky Survey (SDSS), a team of astronomers was able to identify hundreds of black holes that had previously been hidden. They are in galaxies not previously identified to contain quasars, extremely bright objects with rapidly growing supermassive black holes.

“Astronomers have already identified huge numbers of black holes, but many remain elusive,” said Dong-Woo Kim of the Center for Astrophysics | Harvard & Smithsonian (CfA), who led the study. “Our research has uncovered a missing population and helped us understand how they are behaving.”

For about 40 years scientists have known about galaxies that look normal in optical light—with light from stars and gas but not the distinctive optical signatures of a quasar—but shine brightly in X-rays. They refer to these objects as “X-ray-bright, optically normal galaxies,” or “XBONGs.”

By systematically combing through the deep Chandra Source Catalog and comparing to SDSS optical data, the researchers identified 817 XBONG candidates, more than ten times the number known before Chandra was in operation. Chandra’s sharp images, matching the quality of those from SDSS, and the large amount of data in the Chandra Source Catalog made it possible to detect this many XBONG candidates. Further study revealed that about half of these XBONGs represent a population of previously hidden black holes.

“These results show how powerful it is to compare X-ray and optical data mines,” said co-author Amanda Malnati, an undergraduate student at Smith College in Northampton, Massachusetts. “The Chandra Source Catalog is a growing treasure that will help astronomers make discoveries for years to come.”

X-rays are particularly useful to search for rapidly growing black holes because material swirling around them is superheated to millions of degrees and glows strongly in X-ray wavelengths. A thick cocoon of gas and dust surrounding a black hole will block most or all the light at optical wavelengths. X-rays, however, pass through the cocoon much more easily to be detected by Chandra.

After studying the amount of X-rays detected at different energies for each source, the team concluded that about half the XBONG candidates involve X-ray sources that are buried under thick gas because relatively small amounts of low-energy X-rays were detected. Such X-rays are blocked more easily by layers of surrounding gas than higher-energy ones.

“It’s not every day that you can say you discovered a black hole,” said co-author Alyssa Cassity, a graduate student at the University of British Columbia. “So, it’s very exciting to realize that we have discovered hundreds of them.”

The explanation for the XBONGs that are not buried underneath thick gas is less clear. About 100 of the X-ray sources may not be single points of X-rays , but instead appear spread out. Some of these may be galaxies in previously unidentified groups or clusters of galaxies, which are known to contain large quantities of hot, X-ray emitting gas. No more than about 20% of the XBONGs can be categorized this way. The remaining 30% may contain some supermassive black holes located in galaxies where the optical signals from the supermassive black holes are diluted by relatively bright light from stars. Scientists will need additional research to sort out the true nature of these XBONGs.

Dong-Woo Kim presented these results at the 241st meeting of the American Astronomical Society in Seattle.