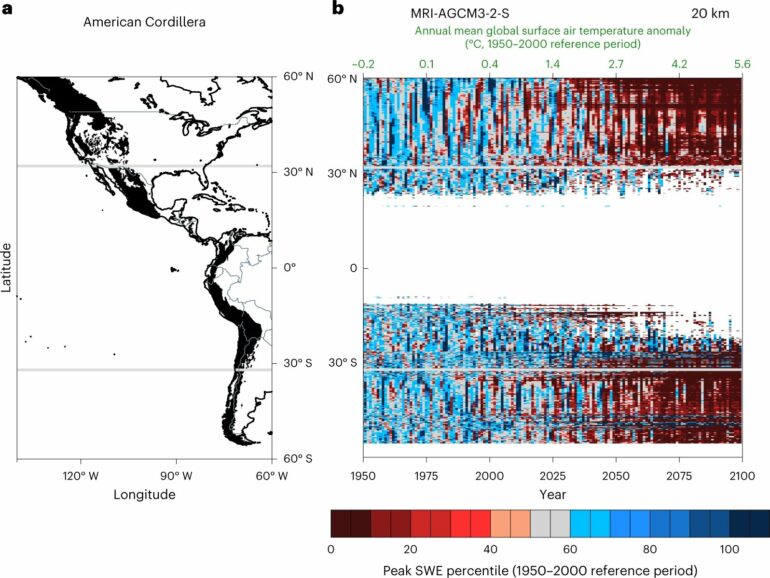 Snowcapped mountains not only look majestic, they’re also vital to a delicate ecosystem that has existed for tens of thousands of years. Mountain water runoff and snowmelt flows down to streams, rivers, lakes, and oceans—and today, around a quarter of the world depends on these natural “water towers” to replenish downstream reservoirs and groundwater aquifers for urban water supplies, agricultural irrigation, and ecosystem support.

But this valuable freshwater resource is in danger of disappearing. The planet is now around 1.1 degrees Celsius (1.9 degrees Fahrenheit) warmer than pre-industrial levels, and mountain snowpacks are shrinking.

Last year, a study co-led by Alan Rhoades and Erica Siirila-Woodburn, research scientists in the Earth and Environmental Sciences Area of Lawrence Berkeley National Laboratory (Berkeley Lab), found that if global warming continues along the high-emissions scenario, low-to-no-snow winters will become a regular occurrence in the mountain ranges of the western U.S. in 35 to 60 years.

Now, in a recent Nature Climate Change study, a research team led by Rhoades found that if global warming reaches around 2.5 degrees Celsius compared to pre-industrial levels, mountain ranges in the southern midlatitudes, the Andean region of Chile in particular, will face a low-to-no-snow future between the years 2046 and 2051—or 20 years earlier than mountain ranges in the northern midlatitudes such as the Sierra Nevada or Rockies. (Low-to-no-snow occurs when the annual maximum water stored as snowpack is within the bottom 30% of historical conditions for a decade or more.)

“These findings are pretty shocking. We assumed that both regions in the southern and northern hemispheres would respond similarly to climate change, and that the Andes would be more resilient given its high elevation,” said Alan Rhoades, a hydroclimate research scientist in Berkeley Lab’s Earth and Environmental Sciences Area and lead author of the new study. “This shows that not every degree of warming has the same effect in one region as another.”

In another major finding, the researchers learned that such a low-to-no-snow future coincides with roughly 10% less mountain runoff in both hemispheres, during wet and dry years.

“If you expect 10% less runoff, that means there’s at least 10% less water available every year to refill reservoirs in the summer months when agriculture and mountain ecosystems most need it,” Rhoades said.

Such diminished runoff would be particularly devastating for agricultural regions already parched by multiyear droughts.

California’s current drought is entering its fourth year. According to the U.S. Drought Monitor, more than 94 percent of the state is in severe, extreme, or exceptional drought. Shrinking groundwater supplies and municipal wells throughout the state are severely impacting the San Joaquin Valley, the state’s agricultural heartland.

And Chile—which exports approximately 30% of its fresh fruit production every year, with much of it shipped to the United States—is in the midst of a historic 13-year drought.

But the new study also suggests that low-to-no-snow in both the northern and southern midlatitude mountain ranges can be prevented if global warming is limited to essentially 2.5 degrees Celsius (4.5 degrees Fahrenheit), the researchers said.

Their analysis is based on Earth system models that simulate the various components of the climate, such as the atmosphere and land surface, to identify how mountain water cycles could continue to change through the 21st century, and what warming levels might give rise to a widespread and persistent low-to-no-snow future across the American Cordillera—a chain of mountain ranges spanning the western “backbone” of North America, Central America, and South America.

The researchers used computing resources at Berkeley Lab’s National Energy Research Scientific Computing Center (NERSC) to process and analyze data collected by climate researchers from all over the world through the Department of Energy’s CASCADE (Calibrated & Systematic Characterization, Attribution, & Detection of Extremes) project. (Post-analysis data from the study is available to the research community at NERSC.)

The closest to what Rhoades and his team considered to be “episodic low-to-no snow” conditions occurred in California between 2012 to 2016. The lack of snow and drought conditions in these years demonstrated the vulnerability of our water supply and, in part, led to the passing of the California Sustainable Groundwater Management Act, new approaches to water and agricultural management practices, and mandatory water cuts, Rhoades said

Persistent low-to-no snow (10 years in a row) has yet to occur, but Rhoades said that water managers are already thinking about such a future. “They’re collaborating with scientists to come up with strategies to proactively rather than reactively manage water resources for the worst-case scenarios if we can’t mitigate greenhouse gas emissions to avoid certain warming levels. But the better strategy would be to prevent further warming by cutting greenhouse gas emissions,” he said.

For future studies, Rhoades plans to continue to examine and run new Earth system model simulations at even higher resolution “to give more spatial context of when and where snow loss might occur and what causes it,” he said, and investigate how every degree of warming might change other key drivers of the mountain-water cycle, such as the landfall location and intensity of atmospheric rivers, and mountain ecosystem responses.

He also plans to continue to work with water managers through the HyperFACETS project to identify ways we can better prepare for a low-to-no snow future through new management strategies such as infrastructure hardening against drought and floods and managed aquifer recharge.

Rhoades is optimistic, citing research from another Berkeley Lab-led study that found reaching zero net emissions of carbon dioxide from energy and industry by 2050 can be accomplished by rebuilding the U.S. energy infrastructure to run primarily on renewable energy.

“It just requires the will and initiative to invest financial resources at the level of urgency that climate change demands, which means we need to start doing this today,” he said.