What robotics can learn from amoebae 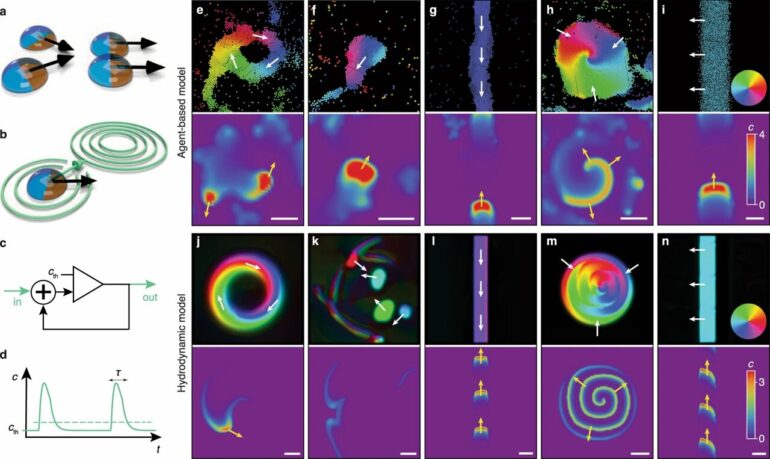 Amoebae are single-cell organisms. By means of self-organization, they can form complex structures—and do this purely through local interactions: If they have a lot of food, they disperse evenly through a culture medium. But if food becomes scarce, they emit the messenger known as cyclic adenosine monophosphate (cAMP). This chemical signal induces amoebae to gather in one place and form a multicellular aggregation. The result is a fruiting body.

“The phenomenon is well known,” says Prof. Erwin Frey from LMU’s Faculty of Physics. “Before now, however, no research group has investigated how information processing, at a general level, affects the aggregation of systems of agents when individual agents—in our case, amoebae—are self-propelled.” More knowledge about these mechanisms would also be interesting, adds Frey, as regards translating them to artificial technical systems.

Together with other researchers, Frey describes in Nature Communications how active systems that process information in their environment can be used—for technological or biological applications. It is not about understanding all details of the communication between individual agents, but about the specific structures formed through self-organization. This applies to amoebae—and also to certain kinds of robots. The research was undertaken in collaboration with Prof. Igor Aronson during his stay at LMU as a Humboldt Research Award winner.

From biological mechanism to technological application

The term “active matter” refers to biological or technical systems from which larger structures are formed by means of self-organization. Such processes are based upon exclusively local interactions between identical, self-propelled units, such as amoebae or indeed robots.

Inspired by biological systems, Frey and his co-authors propose a new model in which self-propelled agents communicate with each other. These agents recognize chemical, biological, or physical signals at a local level and make individual decisions using their internal machinery that result in collective self-organization. This orientation gives rise to larger structures, which can span multiple length scales.

The new paradigm of communicating active matter forms the basis of the study. Local decisions in response to a signal and the transmission of information, lead to collectively controlled self-organization.

Frey sees a possible application of the new model in soft robots—which is to say, robots that are made of soft materials. Such robots are suitable, for example, for performing tasks in human bodies. They can communicate with other soft robots via electromagnetic waves for purposes such as administering drugs at specific sites in the body. The new model can help nanotechnologists design such robot systems by describing the collective properties of robot swarms.

“It’s sufficient to roughly understand how individual agents communicate with each other; self-organization takes care of the rest,” says Frey. “This is a paradigm shift specifically in robotics, where researchers are attempting to do precisely the opposite—they want to obtain extremely high levels of control.” But that does not always succeed.

“Our proposal, by contrast, is to exploit the capacity for self-organization.”

Could we make cars out of petroleum residue?


Citation:
Self-organization: What robotics can learn from amoebae (2022, November 22)