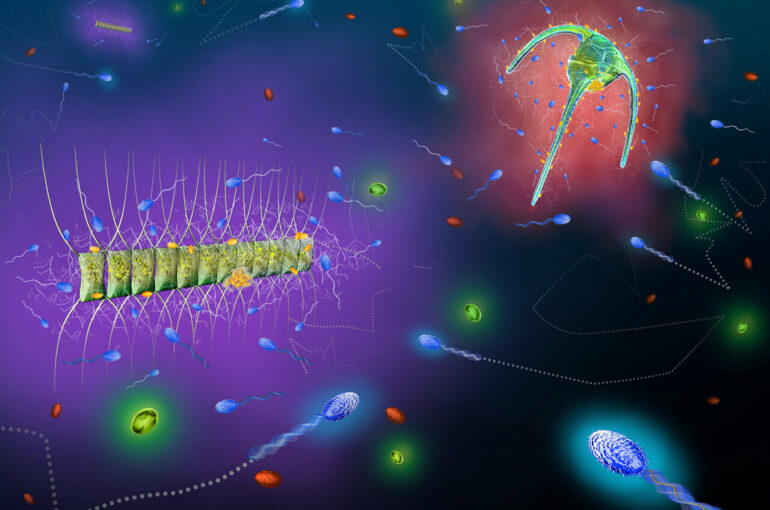 Although invisible to us, every teaspoon of seawater contains more than a million marine bacteria. These tiny microbes play pivotal roles in governing the chemical cycles that control our climate and shape the health of the global ocean, but are they passive drifters or purposeful hunters?

New research demonstrates that bacteria in the ocean use similar behaviors to many foraging animals, swimming through their environment while hunting and selecting their preferred “food” among a soup of chemicals in seawater.

An international study led by researchers from the University of Technology Sydney (UTS) in collaboration with ETH Zurich and the University of Queensland, used purpose-designed microchips to gain a “bacteria’s-eye view” of the ocean and show that microbes in the natural environment use sophisticated behaviors to detect and move towards foods they like.

Microbial ecologist Dr. Jean-Baptiste Raina, lead author of the study, stated that “we had some idea that microbes could swim around their immediate environment to find and exploit food patches, but the only available evidence came from laboratory experiments, which are often not very realistic or representative of natural environments. This kind of behavior had never been comprehensively examined in the environment among natural populations of microbes.

“Now, for the first time, we’ve been able to show that the swimming behavior of microbes in the natural environment is governed by the attraction of bacteria to specific chemical cues, which dictates important processes and interactions that structure the base of the marine food web.”

Dr. Raina said the researchers used a technology called microfluidics to design a specialized “bacteria trap”, which they used to measure the feeding preferences of bacteria in coastal waters near Sydney. This new approach was developed thanks to funding provided by the Gordon and Betty Moore Foundation and the Australian Research Council.

Professor Justin Seymour, senior author of the study, said the work demonstrated how processes occurring over very small distances in the ocean can have large-scale impacts.

“When we think about how small a bacterium is, it is easy to dismiss the consequences of its behavior. However, because marine bacteria are so numerous and diverse, the way they find, consume and recycle chemicals in seawater can have a profound influence on processes that control global climate and the productivity of the marine food web,” Professor Seymour said.

“This work has provided us with a unique perspective of the way bacteria navigate and explore their microscopic habitat.

“Everybody’s seen pictures of schools of fish being targeted by feeding sharks. Here we are looking at a similar process from a microbial perspective, where bacteria are swimming into a patch of chemicals in a kind of feeding frenzy.”

Hidden weaknesses within volcanoes may cause their collapse

The paper “Chemotaxis shapes the microscale organization of the ocean’s microbiome” is published in the journal Nature.