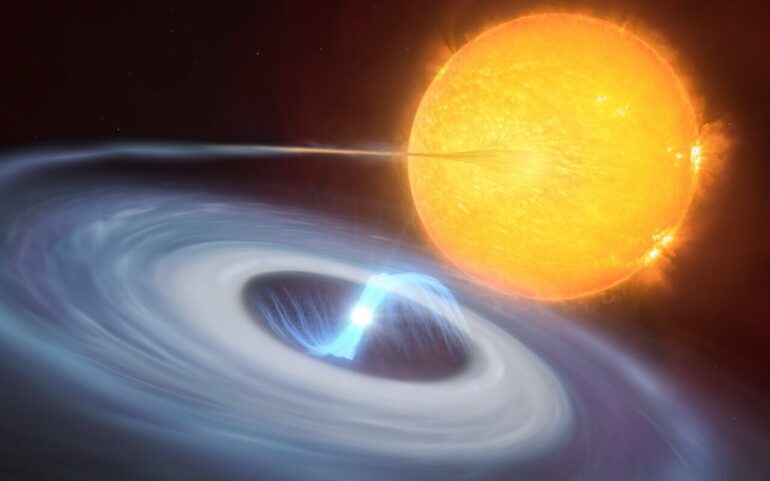 A team of astronomers, with the help of the European Southern Observatory’s Very Large Telescope (ESO’s VLT), have observed a new type of stellar explosion—a micronova. These outbursts happen on the surface of certain stars, and can each burn through around 3.5 billion Great Pyramids of Giza of stellar material in only a few hours.

“We have discovered and identified for the first time what we are calling a micronova,” explains Simone Scaringi, an astronomer at Durham University in the U.K. who led the study on these explosions published today in Nature. “The phenomenon challenges our understanding of how thermonuclear explosions in stars occur. We thought we knew this, but this discovery proposes a totally new way to achieve them,” he adds.

Micronovae are extremely powerful events, but are small on astronomical scales; they are much less energetic than the stellar explosions known as novae, which astronomers have known about for centuries. Both types of explosions occur on white dwarfs, dead stars with a mass about that of our sun, but as small as Earth.

A white dwarf in a two-star system can steal material, mostly hydrogen, from its companion star if they are close enough together. As this gas falls onto the very hot surface of the white dwarf star, it triggers the hydrogen atoms to fuse into helium explosively. In novae, these thermonuclear explosions occur over the entire stellar surface. “Such detonations make the entire surface of the white dwarf burn and shine brightly for several weeks,” explains co-author Nathalie Degenaar, an astronomer at the University of Amsterdam, the Netherlands.

Micronovae are similar explosions that are smaller in scale and faster, lasting just several hours. They occur on some white dwarfs with strong magnetic fields, which funnel material towards the star’s magnetic poles. “For the first time, we have now seen that hydrogen fusion can also happen in a localized way. The hydrogen fuel can be contained at the base of the magnetic poles of some white dwarfs, so that fusion only happens at these magnetic poles,” says Paul Groot, an astronomer at Radboud University in the Netherlands and co-author of the study.

“This leads to micro-fusion bombs going off, which have about one millionth of the strength of a nova explosion, hence the name micronova,” Groot continues. Although “micro” may imply these events are small, do not be mistaken: just one of these outbursts can burn through about 20,000,000 trillion kg, or about 3.5 billion Great Pyramids of Giza, of material.

These new micronovae challenge astronomers’ understanding of stellar explosions and may be more abundant than previously thought. “It just goes to show how dynamic the Universe is. These events may actually be quite common, but because they are so fast they are difficult to catch in action,” Scaringi explains.

The team observed three micronovae with TESS: two were from known white dwarfs, but the third required further observations with the X-shooter instrument on ESO’s VLT to confirm its white dwarf status.

“With help from ESO’s Very Large Telescope, we found that all these optical flashes were produced by white dwarfs,” says Degenaar. “This observation was crucial in interpreting our result and for the discovery of micronovae,” Scaringi adds.

The discovery of micronovae adds to the repertoire of known stellar explosions. The team now want to capture more of these elusive events, requiring large scale surveys and quick follow-up measurements. “Rapid response from telescopes such as the VLT or ESO’s New Technology Telescope and the suite of available instruments will allow us to unravel in more detail what these mysterious micronovae are,” Scaringi concludes.

This research was presented in a paper title “Localized thermonuclear bursts from accreting magnetic white dwarfs” to appear in Nature. A follow-up letter, titled “Triggering micronovae through magnetically confined accretion flows in accreting white dwarfs” has been accepted for publication in Monthly Notices of the Royal Astronomical Society.