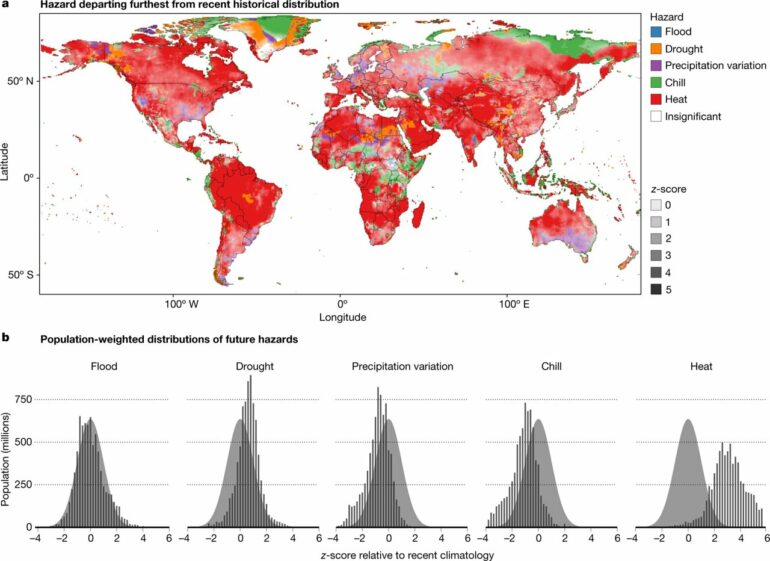 Satellite observations and computer simulations are important tools for understanding past changes in Earth’s climate and for projecting future changes.

However, satellite observations consistently show less warming than climate model simulations from 1979 to the present, especially in the tropical troposphere (the lowest ~15 km of Earth’s atmosphere). This difference has raised concerns that models may overstate future temperature changes.

Rather than being an indicator of fundamental model errors, the model-satellite difference can largely be explained by natural fluctuations in Earth’s climate and imperfections in climate-model forcing agents, according to new research by Lawrence Livermore National Laboratory (LLNL) scientists.

“Natural climate variability appears to have partly masked warming over the satellite era,” said Stephen Po-Chedley, a LLNL climate scientist and lead author of a paper appearing in the Proceedings of the National Academy of Sciences.

The results of the study provide an improved understanding of the causes of historical changes in climate and increase confidence in model simulations of continued global warming over the 21st century.

“Although the Earth is warming as a result of human emissions of carbon dioxide, natural variations in the Earth’s climate can temporarily accelerate or diminish this overall warming trend,” noted Zachary Labe, a co-author from Princeton University and the National Oceanic and Atmospheric Administration’s Geophysical Fluid Dynamics Laboratory. In addition to modulating the rate of warming, natural fluctuations in climate such as the Interdecadal Pacific Oscillation also produce unique patterns of regional surface temperature change.

These surface temperature patterns were key in quantifying the influence of natural variability on satellite-era warming. The research team considered thousands of surface-warming maps from climate-model simulations. The team then trained machine-learning algorithms to relate the pattern of surface warming to the overall magnitude of warming or cooling attributable to natural climate oscillations. The machine-learning approach was successful in disentangling the component of atmospheric warming due to natural climate oscillations versus warming from other causes, such as human-induced increases in the levels of heat-trapping greenhouse gases.

When this approach was applied to the observed pattern of warming, the prediction from machine learning methods indicated that natural oscillations reduced the real-world tropical tropospheric warming trend by about 25% over the satellite era. Although climate models simulate such natural decadal oscillations in climate, the timing and sequence of these fluctuations differs in each simulation and will only match the observations by chance. This partial “offsetting” of warming by natural variability helps to explain why climate model simulations tend to simulate more warming than satellite observations of tropical tropospheric temperature during the last few decades.

In addition to natural climate variability, model forcing agents also can influence comparisons between observations and climate models. The forcing agents are external factors that influence climate, such as historical changes in solar intensity, volcanic eruptions, greenhouse gas concentrations, and aerosol emissions. Information on these factors is used in climate model simulations of the recent past. Imperfections in these inputs can influence the model simulations.

Recent research published in Geophysical Research Letters and led by John Fasullo, a scientist at the National Center for Atmospheric Research and co-author of the new study, has shown that biases in biomass-burning aerosol emissions can artificially enhance surface warming beginning in the simulated mid-1990s, particularly over the Arctic and continents in the northern hemisphere.

Fasullo’s research was extended in this new study to determine whether biases in biomass-burning aerosol emissions also affect warming in the tropical troposphere.

“Our analysis shows that discontinuities in the biomass burning aerosol emissions used in model simulations affect simulated warming in the tropical troposphere,” Fasullo noted. “While this result is specific to NCAR’s Community Earth System Model, it is likely that this problem with biomass-burning inputs affects other climate models as well.”

These two findings—reduced satellite warming from natural climate variability and overestimated model warming due to a problem in the biomass-burning aerosol forcing—largely reconcile the model-satellite discrepancy in tropical tropospheric warming.