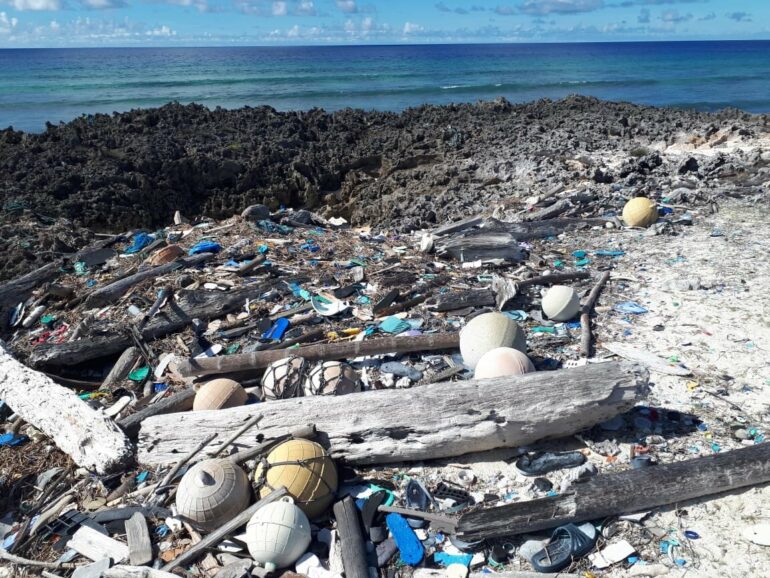 Vast amounts of plastic debris accumulate on beaches across the Seychelles and other small island developing states. Observational analysis (for instance, plastic bottle labels) suggest that much of this waste originates from distant sources and not from the islands themselves. But until now, the likely sources of this debris have not been quantified.

A new study led by the University of Oxford investigated this by developing a high-resolution model that simulated the movement of plastic debris across the world’s oceans. This used input data on ocean currents, waves, and winds, and plastic debris entering the ocean from coastal populations, rivers and fisheries, to predict plastic debris accumulation at 27 sites in the Seychelles and wider western Indian ocean. The results have been published in Marine Pollution Bulletin.

The researchers modeled the likely sources of both land-based and marine types of plastic pollution.

Indonesia is the primary source of land-based plastic debris found on beaches in the Seychelles, with major contributions from India and Sri Lanka. This was particularly the case for medium-large debris that have a high buoyancy (such as bottle caps, sandals, bottles, and small domestic items). Plastic debris arriving from Indonesia would have been at sea for at least 6 months, with some exceeding 2 years. Smaller plastic debris, such as millimeter-sized plastic fragments and pellets, tended to originate from East Africa and from within the Seychelles itself. Smaller fragments are less buoyant than larger items, and do not travel as far before sinking. The Seychelles also accumulate significant amounts of plastic debris of marine origin from fisheries and shipping lanes, such as discarded or lost fishing gear. The large numbers of bottles beaching at these islands with labels suggesting they come from Malaysia, Thailand and, in particular, China, were probably discarded from ships rather than floating from those countries directly. For some islands, a significantly higher proportion of plastic waste comes from marine sources, rather than land. Rates of plastic debris accumulation showed a strong seasonal affect. Plastic debris from both land and marine sources was most likely to land on beaches in the Seychelles at the end of the northwest monsoon, with the highest rates in March and April. Plastic debris accumulation may also be amplified by El Niño–Southern Oscillation (ENSO) and Indian Ocean Dipole (IOD, also known as the Indian Niño) events.

This is the first study to produce a quantitative estimate of the sources of plastic debris for the Seychelles and other remote islands in the western Indian Ocean. Such plastic pollution is a significant environmental threat, both for marine ecosystems and the communities that depend on the ocean for food, tourism, and other economic activities. In addition, plastic debris that drifts from far-off sources increases the risk of spreading invasive species and diseases.

A previous study published in Scientific Reports in 2020 and led by University of Oxford researchers estimated that over 500 tons of debris had accumulated at Aldabra Atoll in Seychelles, an ecologically valuable UNESCO World Heritage Site with zero permanent population.

Lead author of the current research, Noam Vogt-Vincent (Department of Earth Sciences, University of Oxford), said “We have combined observational data from across the Seychelles with cutting-edge computer simulations to generate the most comprehensive predictions currently available for marine litter dispersal in the region. This will provide vital information for local management on these islands—many of which are global biodiversity hotspots—and to inform national and international responses.”

According to the researchers, the results illustrate the sheer scale of the plastic pollution challenge facing small island developing states, and makes the need for a global plastic treaty more urgent than ever. This could include, for instance, greater enforcement of policies that forbid the disposal of fishing gear and other plastics at sea.

The findings also build on the ever-growing evidence that investing in waste management systems and implementing policies for waste disposal at the main source nations is the number one action to prevent land-based litter arriving at remote island sites.

Co-author Dr. April Burt (Seychelles Islands Foundation and University of Oxford) said, “These islands are faced with the deeply inequitable situation of bearing the costs of removing waste they were not responsible for generating, contrary to the ‘polluter pays’ principle. Our study has demonstrated that most of the plastic debris accumulating at these remote islands comes from far-off sources, and this should be the first positive step towards accountability and prevention.”