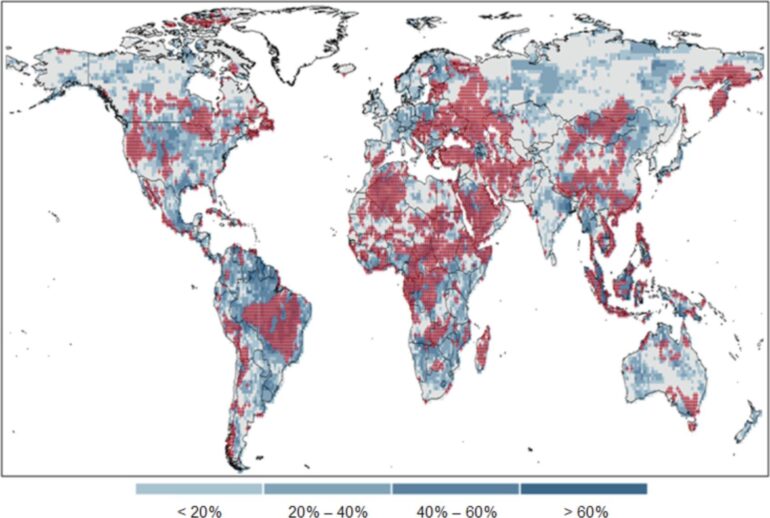 Flinders University experts have worked with Chinese and other Australian researchers on three studies to assess the effects of droughts on heatwaves, vegetation health and soil salinity.

Two other studies, led by China Agriculture University scientists, worked on improving the use of hyperspectral remote sensing technology to monitor salinity of irrigated agricultural soils, and on drought impacts on vegetation health on a large scale.

The first of these studies, published in Science of The Total Environment, shows that while some regions become more frequently hit by hot extreme occurrences due to global warming, others are more affected by the strong year-on-year variability in root zone soil moisture.

The areas more likely to suffer from global warming induced heat extremes are located in dry regions (such as the Sahara), mountain ranges (e.g., the Andes in South America, the Rockies in North America), and plateaus (e.g., the Brazilian Plateau and the Mongolian Plateau), where interannual variability of root zone moisture is generally smaller due to water deficiency, steep topography, and/or low temperature.

The second study, published in Remote Sensing, developed a new “soil spectral reflectance exponential model” to improve the use of soil spectrometry for a quick assessment of soil salinity in large scale.

“It can be useful for monitoring soil salinity on flood plains and on irrigation crop fields,” Guan says.

“Soil salinity affects about 23% of cultivated land, especially in arid and semi-arid irrigated agricultural areas and is one of the main factors restricting sustainable development of agriculture.”

Stream restoration trade-offs: Higher environmental benefits to be had where homeowners are less willing to pay