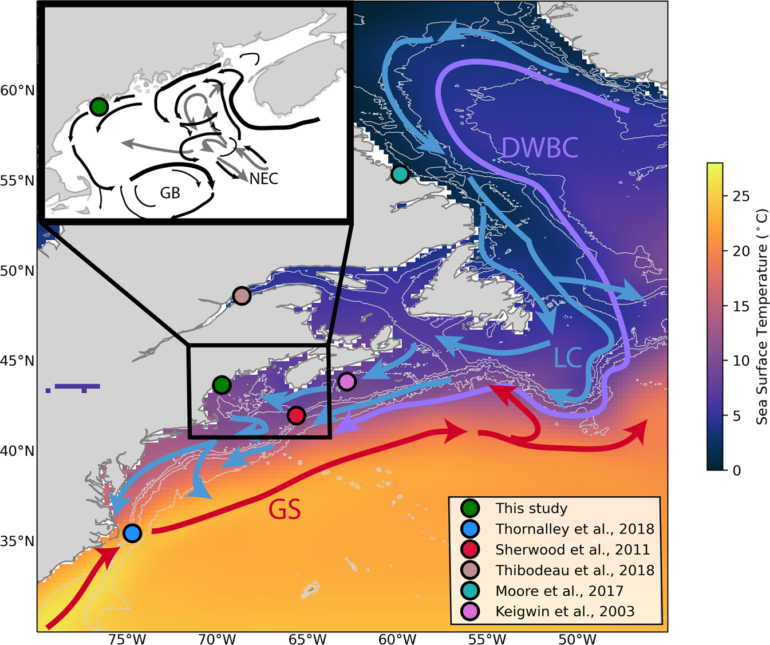 Rapid 20th century warming in the Gulf of Maine has reversed long-term cooling that occurred there during the previous 900 years, according to new research that combines an examination of shells from long-lived ocean quahogs and climate model simulations.

The warming is “likely due to increased atmospheric greenhouse gas concentrations and changes in western North Atlantic circulation,” according to the paper, “Rapid 20th century warming reverses 900-year cooling in the Gulf of Maine,” published in Communications Earth & Environment.

“Given future projections of atmospheric greenhouse gas concentrations and [Atlantic Meridional Overturning Circulation] strength, this warming trend in the Gulf of Maine is likely to continue, leading to continued and potentially worsening ecologically and economically devastating temperature increases in the region in the future,” the paper states.

“What this paper shows—both from the clams and also from the climate model simulations—is that in the late 1800s there were some pretty dramatic changes and the Gulf of Maine began to warm, reversing 900 years of cooling that had been primarily driven by volcanos,” said Nina Whitney, lead author of the paper. Whitney is a NOAA Climate and Global Change Postdoctoral Fellow in the Physical Oceanography department at the Woods Hole Oceanographic Institution (WHOI) and earned her Ph.D. at Iowa State University, where the research presented in this paper began.

“Both the clams and the climate model simulations suggest that greenhouse gas forcings are not only likely causing surface temperature changes affecting the Gulf of Maine, but also causing changes in ocean circulation. The pathways and the strengths of different ocean currents bringing water into the Gulf of Maine have changed as the region has warmed,” Whitney says.

Scientists reconstructed 300 years of hydrographic variability in the Gulf of Maine by discerning geochemical records of oxygen, nitrogen, and previously published radiocarbon isotopes from Arctica islandica (ocean quahog) shells from the Gulf of Maine.

The ocean quahogs, which can live up to about 500 years and grow their shells in annual increments somewhat analogous to tree rings, were absolutely dated by the researchers and served as good recorders of ocean conditions, according to Whitney.

The chemical signatures from the shells provided researchers with a multi-proxy approach to study changes in ocean conditions. Oxygen isotopes served as a proxy for seawater temperature and salinity; nitrogen and radiocarbon isotopes were proxies for water mass source. Researchers put the geochemical results into a broader temporal and spatial context by analyzing fully-coupled climate model simulations from the Community Earth System Model-Last Millennium Ensemble.

“The observed rate of warming in the Gulf of Maine over the last century has outpaced average global ocean warming. This has extensive consequences for the region’s ecosystems and fisheries, and thus for the local economy,” says paper co-author Caroline Ummenhofer, associate scientist in WHOI’s Physical Oceanography Department.

“Our new study combines paleo proxy evidence from bivalves with climate models to put this rapid Gulf of Maine warming into a long-term context. The use of a state-of-the-art set of climate model simulations allows us to distinguish ocean temperature trends due to internal climate dynamics from those due to anthropogenic influences. We find that the rate of warming since the early 20th century in the Gulf of Maine stands out in the context of the last 1000 years, and reverses a long-term multi-century cooling trend that occurred up to the late 1800s. Such long-term context is important for adapting regional fisheries and managing natural resources in vulnerable marine ecosystems in a warming climate,” says Ummenhofer.

“The findings are important because we reveal when the recent warming in the Gulf of Maine began and provide the likely causes of the warming,” says Alan Wanamaker, paper co-author and professor in the Department of Geological and Atmospheric Sciences at Iowa State University.

“It was very satisfying revisiting my Ph.D. research in the Gulf of Maine with more tools and fresh perspectives offered by Nina Whitney and the team,” says Wanamaker. “The reality is that it took about 900 years to cool by 2°C and only 100 years to warm by 2°C. Unfortunately, warming in the Gulf of Maine will likely continue and worsen in the coming decades with negative impacts on the entire ecosystem.”