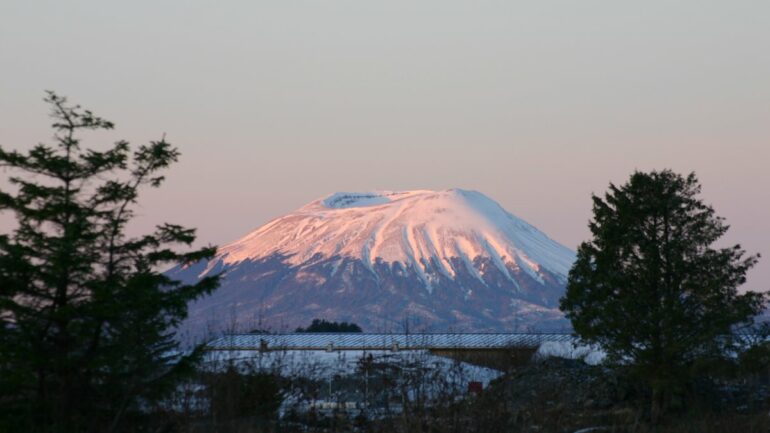 Magma beneath long-dormant Mount Edgecumbe volcano in Southeast Alaska has been moving upward through Earth’s crust, according to research the Alaska Volcano Observatory rapidly produced using a new method.

The new approach at the observatory could lead to earlier detection of volcanic unrest in Alaska.

At Mount Edgecumbe, computer modeling based on satellite imagery shows magma is rising to about 6 miles from a depth of about 12 miles and has caused earthquakes and significant surface deformation.

“That’s the fastest rate of volcanic deformation that we currently have in Alaska,” said the research paper’s lead author, Ronni Grapenthin, a University of Alaska Fairbanks associate professor of geodesy.

“And while it is not uncommon for volcanoes to deform, the activity at Edgecumbe is unusual because reactivation of dormant volcanic systems is rarely observed,” he said.

An eruption is not imminent, Grapenthin said.

The findings by researchers at the UAF Geophysical Institute and the U.S. Geological Survey were published Oct. 10 in the journal Geophysical Research Letters.

The Alaska Volcano Observatory collaborated with the Alaska Satellite Facility, another Geophysical Institute unit, to process data in the cloud—a first for the volcano team. Cloud computing uses remote servers to store data and provide computing services so a researcher does not have to download and sort data to process it, something that can take weeks or months.

The research team began its work as soon as a swarm of earthquakes was noticed at Mount Edgecumbe on April 11, 2022. Researchers analyzed the previous 7.5 years of ground deformation detected in satellite radar data.

Four days later, on April 15, the team had a preliminary result: An intrusion of new magma was causing the earthquakes. A small number of earthquakes began under Edgecumbe in 2020, but the cause was ambiguous until the deformation results were produced.

Additional data processing confirmed the preliminary finding. The Alaska Volcano Observatory informed the public on April 22, less than two weeks after the latest batch of Edgecumbe earthquakes was reported.

“We’ve done these kinds of analyses before, but new streamlined cloud-based workflows cut weeks or months of analysis down to just days,” said David Fee, the Alaska Volcano Observatory’s coordinating scientist at the Geophysical Institute.

Mount Edgecumbe, at 3,200 feet, is on Kruzof Island on the west side of Sitka Sound. It is part of the Mount Edgecumbe Volcanic Field, which includes the domes and crater of adjacent Crater Ridge.

Most striking for the researchers was an area of ground uplift on southern Kruzof Island 10.5 miles in diameter and centered 1.5 miles east of the volcano. The upward deformation began abruptly in August 2018 and continued at a rate of 3.4 inches annually, for a total of 10.6 inches through early 2022.

Subsequent computer modeling indicated the cause was the intrusion of new magma.

The new deformation-based analysis will allow for earlier detection of volcanic unrest, because ground deformation is one of its earliest indicators. Deformation can occur without accompanying seismic activity, making ground uplift a key symptom to watch.

The volcano observatory is applying the new approach to other volcanoes in Alaska, including Trident Volcano, about 30 miles north of Katmai Bay. The volcano is showing signs of elevated unrest.

“This magma intrusion has been going on for three-plus years now,” he said. “Prior to an eruption we expect more signs of unrest: more seismicity, more deformation, and—importantly—changes in the patterns of seismicity and deformation.”

The researchers say the magma is likely reaching an upper chamber through a near-vertical conduit. But they also believe the magma is precluded from moving further upward by thick magma already in the upper chamber.

The new magma is forcing the entire surface up instead.

Mount Edgecumbe is 15 miles west of Sitka, which has a population of about 8,500 residents.

The volcano last erupted 800 to 900 years ago, as cited in Lingít oral history handed down by Herman Kitka. A group of Tlingits in four canoes had camped on the coast about 15 or 20 miles south of some large smoke plumes, according to the account. A scouting party in a canoe was sent to investigate the smoke and reported “a mountain blinking, spouting fire and smoke.”

Others involved in the research include Franz Meyer, chief scientist of the Alaska Satellite Facility; UAF graduate students Yitian Cheng, Mario Angarita and Darren Tan; and Aaron Wech of the U.S. Geological Survey.