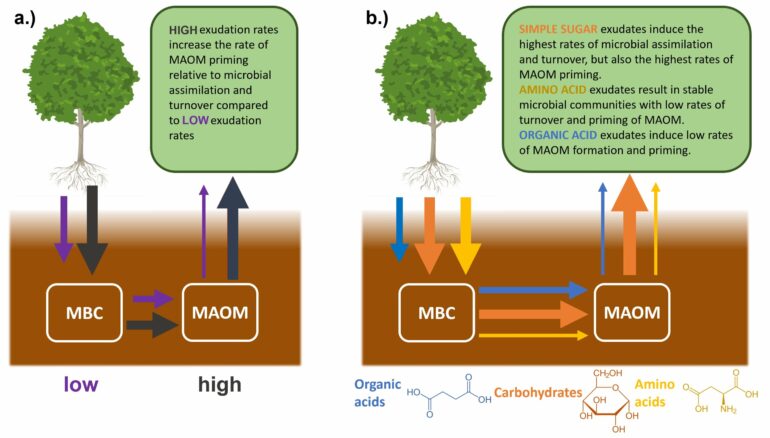 Ecosystem ecology studies often focus on what’s happening to plants above ground, for instance exploring photosynthesis or water loss in leaves. But what is happening below the ground in plant roots is equally important when evaluating ecosystem processes.

In a new study in Nature Geoscience researchers in the Department of Organismic and Evolutionary Biology at Harvard University examined root exudates and their impact on soil carbon storage revealing surprising and counterintuitive results.

Root exudates are organic carbon compounds (such as simple sugars, organic acids, and amino acids) released from living plant roots into the soil. These small molecules can bind directly to soil minerals, making them important regulators of soil carbon formation and loss. Unlike plant litter (such as leaves and roots), which must be decomposed before it can affect the soil carbon pool, root exudates can have immediate effects on mineral-associated organic matter (MAOM), which contains long-cycling, “stable” soil carbon.

Chari and Taylor collected soil cores from Harvard Forest, a temperate hardwood forest in central Massachusetts, and incubated them directly in centrifuge tubes. They then fabricated three different carbon-13 root exudate “cocktails” of simple sugar, organic acid, and amino acid. They delivered the “cocktails” to the soil cores via “artificial roots” at two different rates over a thirty-day period. Unlike other studies, Chari and Taylor did not use homogenized or artificial soils. Their sampling method preserved large amounts of heterogeneity in soil carbon and microbial communities present in the forest.

“We wanted to know if these mechanisms were having an effect at ecologically meaningful scales,” said Chari. “We used intact soil cores to test if the effect of root exudates would overcome the natural heterogeneity in the system.”

The researchers measured both initial and final carbon stocks in the cores. They found that contributions of root exudates to soil carbon were driven by contributions to the long-cycling MAOM fraction. MAOM are microscopic coatings on soil particles made mostly of the byproducts of bacteria and fungi. MAOM stays in the soil for decades meaning it can maintain carbon in soil for a very long time.

“You would think that if you increase the rate of root exudation you would increase carbon input into the soil forming more soil carbon,” said Chari, “but we found instead an opposite effect that offset the increase in carbon.”

The researchers refer to this as the priming effect. Priming occurs when the input of new soil carbon prompts the decomposition of old soil carbon. Enhanced rates of root exudation appeared to increase rates of MAOM priming relative to rates of MAOM formation.

“First principles would suggest that the more carbon we push into the soil via exudation, the more carbon is going to accumulate in these MAOM fractions. When, in fact, that doesn’t seem to be the case,” said Taylor. “In reality, you get more MAOM formation, but you also get more loss of it and it balances out. You don’t actually get more carbon sticking around in the soil, even when you’re pushing more in.”

Chari and Taylor also found the different exudate compounds each had different effects on the soil carbon. Glucose (simple sugar) produced higher MAOM turnover both in formation and loss, but there was no net accumulation of MAOM. While succinic acid (organic acid) and aspartic acid (amino acid) drove lower rates of MAOM formation, but did result in a net MAOM carbon accumulation. Interestingly, the researchers found that amino acids had a particularly strong positive effect in increasing microbial biomass carbon formation, while organic acids did not. These findings again suggests the larger microbial community enhances the microbial priming effect. The results further validate that predicted increases in root exudation rates and a shift toward simple sugars caused by global change may reduce soil’s carbon storage capacity.

Preparing for when lightning strikes the same place twice, then strikes again

“These changes are happening ubiquitously below the soil surface, yet even tiny changes in this process can have huge implication for soil carbon storage,” said Taylor. “People know that processes in a leaf are important, but every root below our feet has a huge impact on carbon in the soil. And elevated CO2, warming, or other climate change drivers, could cause soil carbon loss to increase disproportionately to soil carbon formation.”

Going forward, Chari and Taylor continue to measure changes in the rate and composition of root exudates under elevated CO2 and warming in a variety of different ecosystems, including temperate forests, grasslands, and corn and soybean agricultural fields.