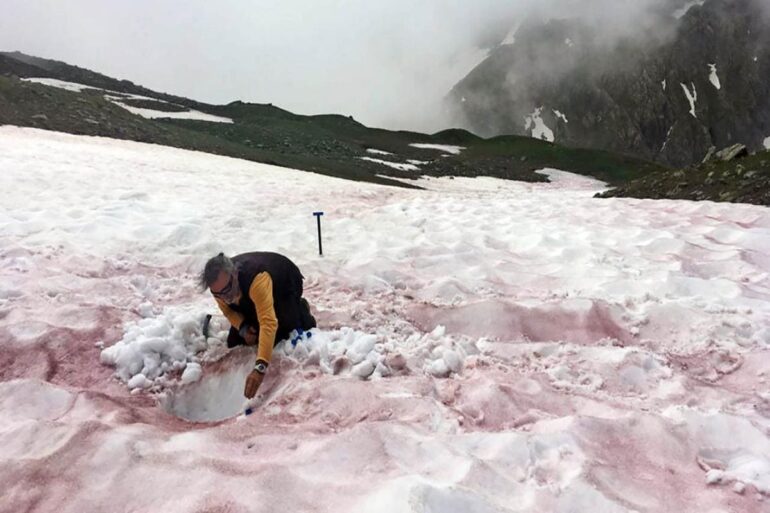 Red snow is a unique phenomenon caused by blooms of red algae that live on the surface of snow. Now, researchers from Japan have developed a model to predict the occurrence of red snow events. In a recent study published in the Journal of Geophysical Research: Biogeosciences, researchers from Institute of Industrial Science, The University of Tokyo found that red snow algal blooms are associated with the duration of snow melt and the timing of new snowfall.

Red algae are photosynthetic microbes that live on the surface of snow and ice. The algae appear in the spring on thawing snow surfaces and can speed up snow melt as they darken the snow surface. The dark surface becomes warmer and snow melts faster. The abundance of snow algae is influenced by factors such as the snow conditions, like snow depth and nutrient availability, as well as local meteorological conditions.

“It’s important to understand why and when these algal blooms occur,” says lead author of the study Yukihiko Onuma. The cryosphere, which includes all the frozen places on Earth, is dwindling as global temperatures rise. “Our aim with this research was to try and predict the location and timing of red snow events and their effects on global snow cover.”

The researchers took a previously developed simple snow algae model and incorporated additional factors that influence the occurrence of algal blooms, such as snowfall and daylight length. When they tested the new model using real-world data from fifteen sites around the world, they found it performed well.

The team then incorporated the snow algae model into a land surface model to create a global snow algae simulation. “The simulation predicted algal blooms in places where they have previously occurred,” explains Onuma. “We also know that new snowfall during the melting season can cover the algae and, in the simulation, we found that the timing of blooms was closely tied to how long the snow cover persisted and the timing of fresh snowfall during the season.”

Given that snow cover is decreasing globally, this new model is a valuable tool for predicting future snow algae blooms and their effects on this important global habitat.

The article, “Global simulation of snow algal blooming by coupling a land surface and newly developed snow algae models,” was published in the Journal of Geophysical Research: Biogeosciences.