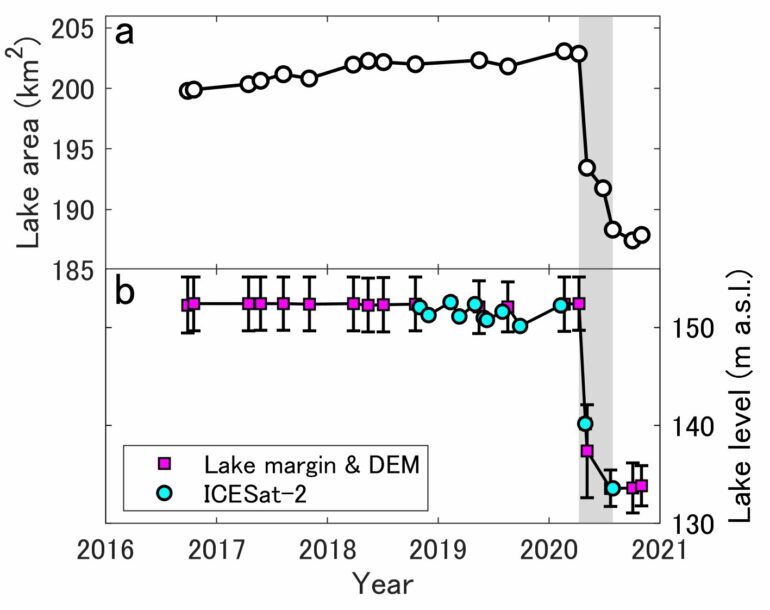 Only satellites were watching when the world’s fourth-largest proglacial lake suddenly drained in 2020. Hokkaido University researchers have now uncovered the event and analyzed the cause—the collapse of a sediment bump at the outlet of the lake.

Proglacial lakes form when meltwater from retreating glaciers is trapped by ice or by a moraine left behind by the same or another glacier. A warming climate contributes to the recent global increase in the number and volume of these lakes, and they also themselves contribute to glaciers melting even faster. However, these lakes can drain very quickly when the dams that contain them fail for one of various reasons.

Such a catastrophic event not only poses a direct safety risk for humans, but also influences ecosystems downstream due to the sudden influx of a large amount of freshwater. It is therefore important to monitor proglacial lakes and study their interactions with their surroundings. Unfortunately, this is difficult due to their often remote location.

Hokkaido University glacier scientist Shin Sugiyama and doctoral student Shuntaro Hata were studying glacier fluctuations in Chilean Patagonia using satellite images, when they noticed that the proglacial lake Lago Greve had shrunk significantly in the short time between April and July of 2020. In their publication of these findings in the journal Communications Earth & Environment, they add further analysis of the available data confirming that the lake’s water level dropped by 18 meters, which translates to a loss of 3.7 cubic kilometers (or, giga-tons) of water—the largest such event observed by a satellite to date.

This huge loss of water even measurably changed the gravity field of Earth, as recorded by GRACE satellites, even though quantitative data from these satellites is inconsistent with the actual amount of water drained. Finally, careful analysis of the satellite imagery and topographic data from before and after the event enabled them to deduce that the cause of the release probably was the collapse of a sediment bump close to the outlet of the lake.

This study opens up many interesting aspects. For one, it points the way for future research on glacial dynamics. Sugiyama explains, “These results provide detailed information on large-scale glacial lake outburst floods, which occur very rarely, and are important for understanding disasters caused by glacial lake failures.”

It also highlights the possibility and the current limitations of using GRACE satellite data for observing such events. The researchers write, “The importance of GRACE measurements in studying such events would be increased if the calculation of the gravity field readings is adapted for localized events.”