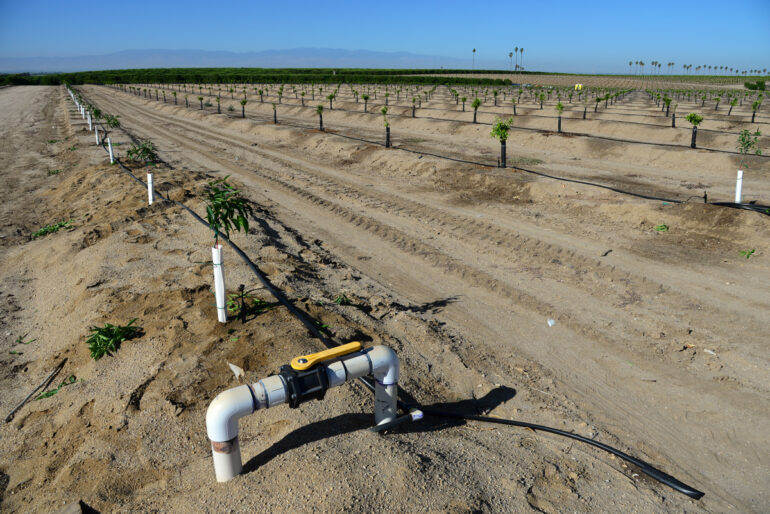 “If you don’t get these water levels to come back up, then the land is going to sink, potentially tens of centimeters per year, for decades. But if they go up, you can get rewarded very quickly. You almost immediately improve the situation,” said Matthew Lees, a geophysics Ph.D. student and lead author of the study, which appears June 2 in Water Resources Research.

The research comes amid worsening drought in a state where climate change is tipping the odds toward hot conditions with more precipitation extremes. The first four months of 2022 marked California’s driest start to a year since 1895. Reservoir levels are so low that, for a second year in a row, many irrigation districts are poised to receive none of their usual allocations of water from the Central Valley Project, the federally managed network of reservoirs and canals that conveys water to some 3 million acres of farmland.

“There is an urgent need to better understand the fundamental mechanisms controlling the link between water levels and deformation of the ground surface,” said senior study author Rosemary Knight, a professor of geophysics at Stanford’s School of Earth, Energy & Environmental Sciences (Stanford Earth) and senior fellow at Stanford Woods Institute for the Environment.

Historically, diminished surface water supplies have led farmers to rely heavily on groundwater for irrigation in the Central Valley. This region produces about a quarter of the nation’s food and now holds most of the 21 groundwater basins designated as being critically overdrafted under California’s landmark 2014 Sustainable Groundwater Management Act, or SGMA.

The law requires local water agencies to bring groundwater basin withdrawals and deposits into balance by 2040. Under SGMA, agencies are also required to craft plans to monitor and address land subsidence, which can damage infrastructure and has already reduced the carrying capacity of critical aqueducts and canals.

“This seemingly unmovable, solid surface that we live on is actually a dynamic, moving object that’s constantly changing. Those changes interact with our lives much more than most of us realize,” Lees said. “This subsidence problem is an incredible example of that.”

“The modeling carried out in this study, if done in areas throughout the state, would provide the scientific basis needed to inform sustainable management. A range of possible actions to mitigate subsidence could be rigorously assessed,” said Knight, who is the George L. Harrington Professor at Stanford Earth.

The new research simulates 65 years of subsidence near the town of Hanford in the San Joaquin Valley, which makes up roughly the southern half of the vast Central Valley. Building on research published in 2019 by Knight and Ryan Smith, Ph.D. ’18, the simulation combines satellite-based subsidence data, private well logs, and water level measurements dating back to the 1950s to make a physical model of the area’s subsurface, including layers of coarse-grained sediments and clays that compact like a squeezed-out sponge as water levels drop.

Local water agencies and conservation districts provided well logs and water level measurements and helped identify research questions for future sustainable management. Local managers, with years of experience observing how water levels in the study area rise and fall during wet and dry periods, also helped the scientists spot data errors in early iterations of the model. “Partnerships with people in the local agencies made this study possible,” Knight said. “The data they contributed and their knowledge of the system were essential.”

Consistent with modeling and observations made throughout the more closely monitored western half of the San Joaquin Valley in the 1970s, the results suggest thick clays throughout the valley will continue to compact for decades to centuries after water levels in the region’s aquifers stabilize. “This is an important observation,” the authors write, because sustainable management plans submitted for the area studied assume water levels stabilized at recent lows will be enough to prevent future sinking. “This assumption is wrong,” Knight said. The land’s subsidence will slow only if deposits to groundwater basins—from rainfall and runoff or managed aquifer recharge projects—begin to outpace withdrawals.

The new modeling also shows that compaction in the deepest layer of the groundwater system has accounted for more than 90 percent of subsidence in the study area over the past 20 years. “If your only concern is the land sinking, then you are far better off pumping your water from the shallow zone than from the deep zone,” Lees said.

While the study focuses on a relatively small area, the authors say the results are likely representative of subsiding regions throughout the San Joaquin Valley, and the methodology can be applied to understand subsidence in similar aquifer systems worldwide.