The Gulf Stream has increased steadily over the last century 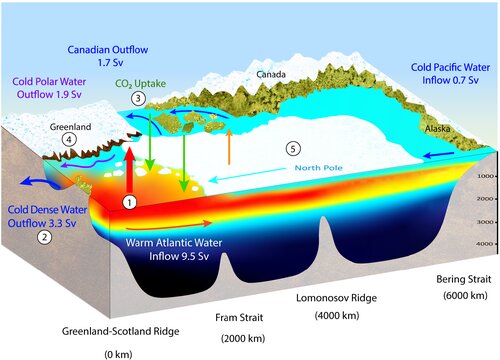 Together with colleagues, Lars H. Smedsrud, professor at UiB and researcher at the Bjerknes Centre for Climate Research, have examined 100 years of research results to see how the ocean transport has evolved.

“It was surprising to find such consistent results that show a steady increase, which entails that the Gulf Stream’s extension into the Nordic Seas has strengthened,” professor Lars H. Smedsrud says.

With the surprising volume increase, the total heat transport has increased with 30 percent. Smedsrud and his team have examined changes in relation to ice melting in the Arctic, glacier melting on Greenland and CO2uptake from the atmosphere.

“While we have expected an increase in temperature, there is nothing about global warming that would suggest an increase in volume transport. But the increase is consistent with both stronger winds and declining sea ice covers. In addition, we see an increase in the vertical and horizontal ocean circulation in the Nordic Seas and the Arctic,” Smedsrud explains.

The study covers the Nordic Seas and the Arctic sea ice and is published in Reviews of Geophysics.

Smedsrud explains that global warming could potentially weaken the vertical part of the ocean circulation in the future, the part known as the Atlantic Meridional Overturning Circulation (AMOC).

“This would affect the Gulf Stream system, but many observations indicate that the horizontal part will stay unaffected, due to declining sea ice covers and increased heat loss to the atmosphere.”

How the ocean circulation will evolve in the future, is still uncertain. However, the study also shows a steady loss of sea ice in the Arctic over the last hundred years, which has allowed stronger uptake of CO2 from the atmosphere.

“During the winter the sea ice isolates the warm ocean from the cold air. With melting sea ice, the heat transfer to the air increases. The air gets warmer, the winters get milder. This is directly connected to the increased ocean heat transport,” Smedsrud explains.


Citation:
The Gulf Stream has increased steadily over the last century (2022, January 24)