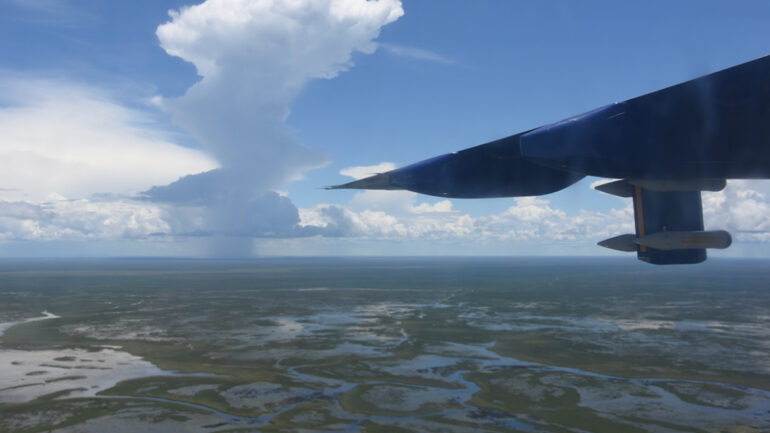 Since 2007, the world’s atmospheric methane concentration has risen at an accelerated rate, but scientists aren’t exactly sure why. This is a problem, because methane is a particularly potent greenhouse gas. It has more than 80 times the warming power of carbon dioxide during its first 20 years in the atmosphere, and it accounts for about 30% of global warming since preindustrial times.

To better understand methane’s recent climb and how to mitigate it, scientists are trying to collect more accurate measurements of methane’s sources, both human and natural. In a new study published in Global Biogeochemical Cycles, Shaw et al. find that tropical wetlands, which are responsible for about a fifth of the world’s methane emissions, are releasing significantly more methane than previously thought.

Methane emissions from tropical wetlands are poorly studied, especially in Africa. The researchers set out to help fill this data gap with the first-ever airborne surveys of methane released from wetlands in Zambia, focusing on three of the country’s large wetland areas: Bangweulu, Kafue, and Lukanga. They used the United Kingdom’s Facility for Airborne Atmospheric Measurements, a British Aerospace 146 aircraft fitted with a scientific measurement laboratory, to sample environmental data. And to estimate methane emissions, they applied three approaches at each wetland site: airborne mass balance, airborne eddy covariance, and atmospheric inversion.

If these findings hold true for other understudied tropical wetlands, they indicate that Global Carbon Project models significantly underestimate wetlands’ contributions to the world’s atmospheric methane. This is especially concerning, because climate change could create a feedback cycle in which increasing rainfall and rising temperatures drive wetlands to release even more of the gas. In that scenario, then to meet the Paris Agreement goal of keeping global warming to under 2°C relative to preindustrial times, countries will need to reduce human-caused greenhouse gas emissions by far greater quantities than current estimates suggest.