Fauci says U.S. has ‘independent spirit,’ but now is the time to ‘do what you’re told’ 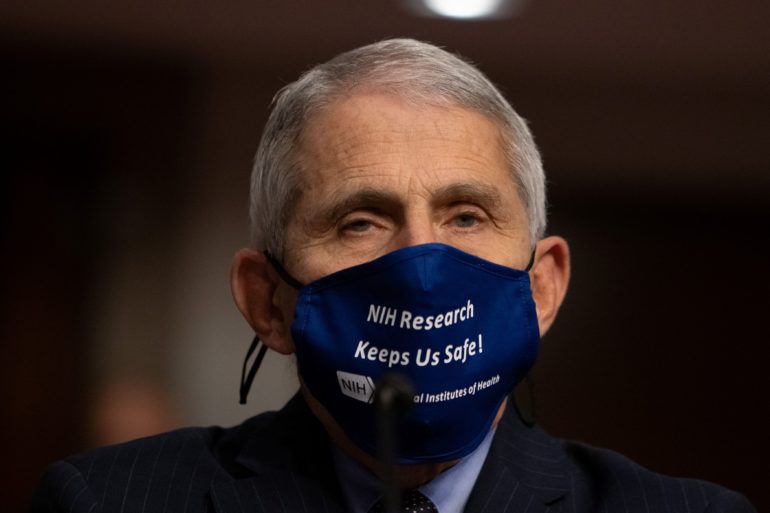 Whitehouse coronavirus advisor Dr. Anthony Fauci thinks that Americans have an independent spirit, but that there are times when it’s in our best interest to follow the rules.

Fauci, speaking on Thursday at Washington National Cathedral with other top health experts on the pandemic, noted that it is a bit unfair to compare the United States’ coronavirus response with other countries. The United States isn’t an island with five million people that can easily be shut down, he notes. So suppressing and controlling the virus is a lot more of a challenge.

“I was talking with my U.K. colleagues who are saying the U.K. is similar to where we are now, because each of our countries have that independent spirit,” he said on stage. “I can understand that, but now is the time to do what you’re told.”

Fauci noted that scientists have been perceived throughout this pandemic as “authoritarian” by members of the public, because of the steps taken to combat the virus. He noted that it’s unfortunate that science “has been lumped into politics.”

In a “divisive” society, he said, people’s willingness to follow the advice of scientists has often been portrayed a political decision. Surveys have found that Democrats are more likely than Republicans to view Covid-19 as a major threat to public health.

“All of a sudden science gets caught in a lot of this divisiveness,” he said.

But if the majority of Americans started following the guidelines, Fauci expressed confidence that we will not need to shut down the country. Instead, he explained, the virus could be brought under control if people wore masks, socially distanced, and washed their hands.

In his view, herd immunity is not a viable strategy.

“It sounds simple in the context of this ominous outbreak but in fact we can turn it around,” he said.

These Australian Ducks Can Learn to Swear Like People, And Biologists Are Excited

More than 10 million people in the U.S. have contracted the virus, and 242,000 have died. There have been more than 1,000 deaths a day for weeks at a time and the discussion comes as many health experts are growing increasingly concerned about the winter months.

But this week, the country heard some positive news with Pfizer announcing that its vaccine is more than 90 percent effective.

Fauci seemed more optimistic, given the vaccine news, than he has been in the past. He was hopeful that people can see a light at the end of the tunnel, and will be ready to take the pandemic more seriously.

“When people know that help is on the way … I hope we can get over the Covid fatigue,” he said.