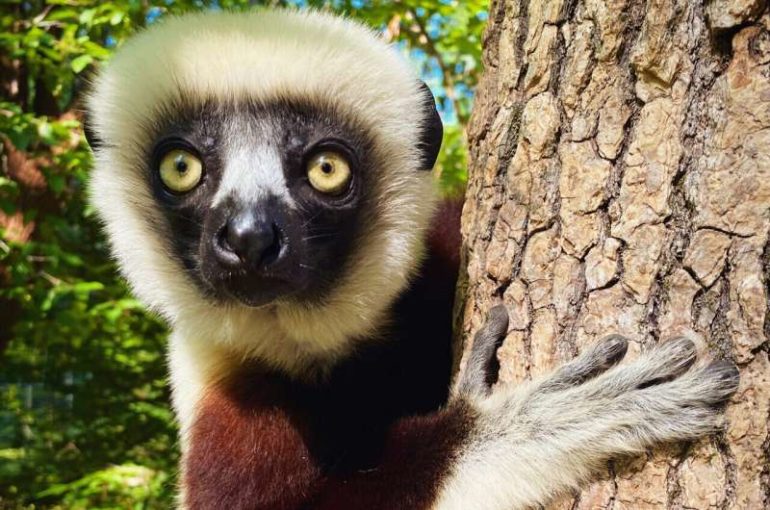 Fruits and veggies are good for you and if you are a lemur, they may even help mitigate the effects of habitat loss.

A new study sequencing the genome of four species of sifakas, a genus of lemurs found only in Madagascar’s forests, reveals that these animals’ taste for leaves runs all the way to their genes, which are also more diverse than expected for an endangered species.

Sifakas are folivores, meaning that the bulk of their diet is composed of leaves. Leaves can be difficult to digest and full of toxic compounds meant to prevent them from being eaten. Unlike our carefully selected spinach, tree leaves also don’t taste great, and are not very nutritious.

Because of that, leaf-eaters typically have all sorts of adaptations, such as a longer digestive tract with special pouches where bacteria help break down the food.

In a new study appearing April 23 in Science Advances, researchers sequenced genomes from Coquerel’s (Propithecus coquereli), Verreaux’s (P. verreauxi), golden-crowned (P. tattersalli), and diademed (P. diadema) sifakas. The individuals sequenced had been wild-born but were housed at the Duke Lemur Center, with the exception of two Verreaux’s sifakas, one wild and one born in captivity.

These four species are found in different habitats in Madagascar, ranging from arid deciduous forests to rainforests, but share a similar diet.

The genomes showed molecular evidence for adaptations to neutralize and eliminate leaves’ toxic compounds, optimize the absorption of nutrients, and detect bitter tastes. Their genome shows patterns of molecular evolution similar to those found in other distantly related herbivores, such as the colobus monkeys from Central Africa, and domestic cattle.

Yet despite being such fine-tuned leaf-eating machines, sifakas can eat more than just leaves. They eat lots of fruits when those are in season and will also happily munch on flowers.

“Sifakas can take advantage of foods that are higher energy and are more nutrient dense, and can fall back and subsist on leaves in times of scarcity,” said Elaine Guevara, assistant research professor of Evolutionary Anthropology at Duke University and lead author of the study.

This dietary flexibility may have given them an advantage over their strictly leaves-only or fruit-only cousins in the face of threats such as forest fragmentation and disturbance.

Indeed, the analysis also showed that sifakas are genetically more diverse than would be expected for a critically endangered species on an island of shrinking habitats.

“These animals do seem to have very healthy levels of genetic diversity, which is very surprising,” said Guevara.

Guevara and her team gauged genome heterozygosity, which is a measure of genetic diversity and an indicator of population size. Species at high risk for extinction tend to have only small populations left, and very low heterozygosity.

Sifakas do not follow this pattern and show far higher heterozygosity than other primates or other species of critically endangered mammals. Heterozygous populations tend to be more resilient to threats such as climate change, habitat loss, and new pathogens.

However, sifakas have very long generation times, averaging 17 years, so the loss of genetic diversity may take decades to become obvious. Guevara says that the genetic diversity found in this study may actually reflect how healthy populations were 50 years ago, prior to a drastic increase in deforestation rates in Madagascar.

There is still room for optimism. By not being picky eaters, sifakas may be less sensitive to deforestation and habitat fragmentation than primates with more restricted diets, allowing them to survive in areas with less-than-pristine forests.

Their greater genetic diversity may therefore mean that there is still hope for sifakas, if their habitats receive and maintain protection and strategic management.

“Sifakas still have a good chance if we act. Our results are all the more reason to do everything we can to help them,” said Guevara.