Flies evade your swatting thanks to sophisticated vision and neural shortcuts 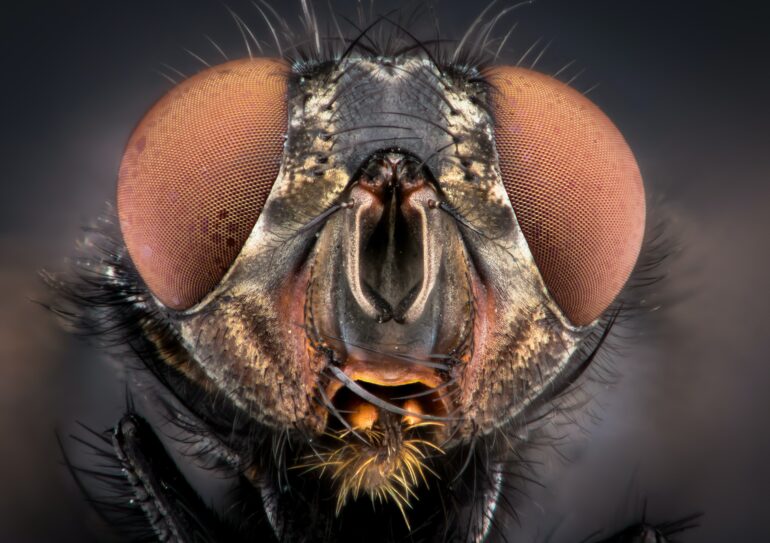 Sitting outside on a summer evening always sounds relaxing until flies and mosquitoes arrive – then the swatting begins. Despite their minuscule eyes and a brain roughly 1 million times smaller than yours, flies can evade almost every swat.

Flies can thank their fast, sophisticated eyesight and some neural quirks for their ability to escape swats with such speed and agility.

Our lab investigates insect flight and vision, with the goal of finding out how such tiny creatures can process visual information to perform challenging behaviors, such as escaping your swatter so quickly.

Flies have compound eyes. Rather than collecting light through a single lens that makes the whole image – the strategy of human eyes – flies form images built from multiple facets, lots of individual lenses that focus incoming light onto clusters of photoreceptors, the light-sensing cells in their eyes. Essentially, each facet produces an individual pixel of the fly’s vision.

A fly’s world is fairly low resolution, because small heads can house only a limited number of facets – usually hundreds to thousands – and there is no easy way to sharpen their blurry vision up to the millions of pixels people effectively see. But despite this coarse resolution, flies see and process fast movements very quickly.

We can infer how animals perceive fast movement from how quickly their photoreceptors can process light. Humans discern a maximum of about 60 discrete flashes of light per second. Any faster usually appears as steady light. The ability to see discrete flashes depends on the lighting conditions and which part of the retina you use.

Some LED lights, for example, emit discrete flashes of light quickly enough that they appear as steady light to humans – unless you turn your head. In your peripheral vision you may notice a flicker. That’s because your peripheral vision processes light more quickly, but at a lower resolution, like fly vision.

If you took one of these flies to the cineplex, the smooth movie you watched made up of 24 frames per second would, to the fly, appear as a series of static images, like a slide show. But this fast vision allows it to react quickly to prey, obstacles, competitors and your attempts at swatting.

Our research shows that flies in dim light lose some ability to see fast movements. This might sound like a good opportunity to swat them, but humans also lose their ability to see quick, sharp features in the dark. So you may be just as handicapped your target.

When they do fly in the dark, flies and mosquitoes fly erratically, with twisty flight paths to…