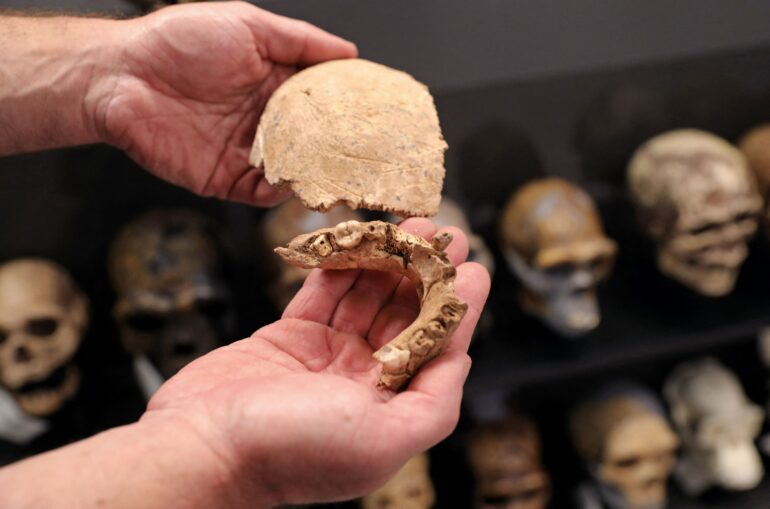 Fossilized bones help tell the story of what human beings and our predecessors were doing hundreds of thousands of years ago. But how can you learn about important parts of our ancestors’ life cycle – like pregnancy or gestation – that leave no obvious trace in the fossil record?

The large brains, relative to overall body size, that are a defining characteristic of our species make pregnancy and gestation particularly interesting to paleoanthropologists like me. Homo sapiens’ big skulls contribute to our difficult labor and delivery. But the big brains inside are what let our species really take off.

My colleagues and I especially wanted to know how fast our ancestors’ brains grew before birth. Was it comparable to fetal brain growth today? Investigating when prenatal growth and pregnancy became humanlike can help reveal when and how our ancestors’ brains became more like ours than like our ape relatives’.

To investigate the evolution of prenatal growth rates, we focused on the in-utero development of teeth – which do fossilize. By building a mathematical model using the relative lengths of molar teeth, we were able to track evolutionary changes in prenatal growth rates in the fossil record. Based on our model, it looks as if pregnancy and prenatal growth became more humanlike than chimplike almost 1 million years ago.

Gestation and the human brain

Pregnancy and gestation are important periods – they guide future growth and development and set the biological course for life.

But human pregnancy, and particularly labor and delivery, cost a lot of energy and are often dangerous. The large fetal brain requires a lot of nutrients during development. The rate of embryonic growth during gestation, also known as the prenatal growth rate, exacts a metabolic and physiological toll on the gestating parent. And the tight fit of the infant’s head and shoulders through the pelvic canal during delivery can lead to death, for both the mother and child.

As a trade-off to those potential downsides, there must be a really good reason to have such large heads. The justification is all the abilities that come along with having a big human brain. The evolution of our large brain contributed to our species’ dominance and is associated with increased use of technology and tools, creation of art and the ability to survive in diverse landscapes, among other advances.

The timing and sequence of events that led to the evolution of our large brains is entangled with the ability to find and process more resources, through the use of tools and cooperative group work, for example.