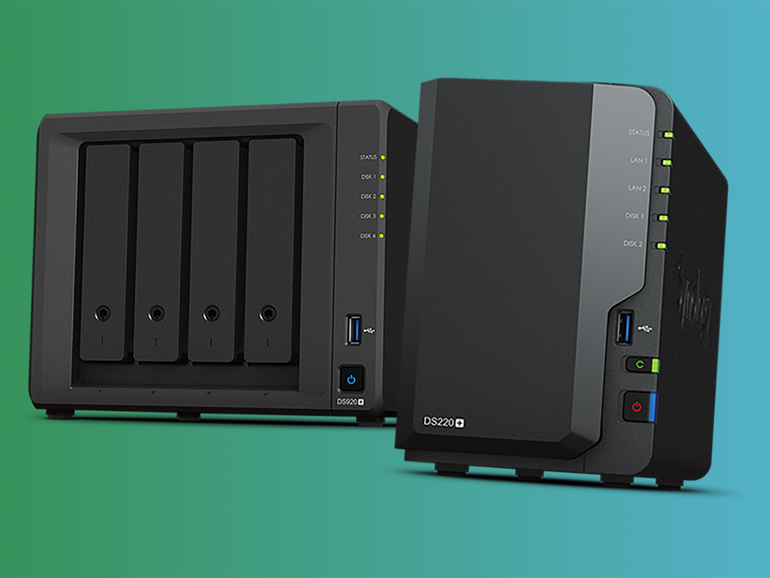 If you work for a large company, you undoubtedly have access to a corporate file server. But if you work for a small business or you’re working from home, your file server is likely to be in the cloud, probably something offered by Dropbox, AWS, Google, or Microsoft. Cloud-based servers are good (here I talk about how one saved my bacon), but for full-time work-at-home folks, cloud based servers don’t always cut the mustard.

Cloud-based servers are terrible for video editing, as it takes forever to upload and download video to the cloud (even if you have a fast pipe). If you’re doing anything with video (or other large files), you’re unlikely to find cloud storage practical except, maybe, for backup. Second, cloud servers can get kind of expensive. Sure, if you’re equipping a NAS, you’re paying for drives, but once you pay out the expense for the NAS and drives, you’re done. You don’t have to pay for it month after month after month.

Don’t get me wrong. I strongly recommend cloud storage as one leg in a 3-2-1 backup strategy, but for home and small office use, a NAS can be invaluable. It’s fast, it’s easy to get to, you can segment shares for family members or workgroups, and many NASes offer a wide range of additional applications that turn your box into a local, private, on-premises general-purpose business server (or, in the case of the QNAP below, a full media center computer).

Let’s dive in. I’m showing you five machines that I am sure will serve you well over the years.


Best-in-class UI in a four-bay model

By far, the standout feature of any Synology NAS is the company’s exceptional DiskStation Manager (DSM) software. While the Synology hardware is on-par with many other NAS offerings, it’s when that hardware is combined with the DSM software that Synology’s offerings become best-in-class.

It’s not just the fit-and-finish of the UI, which is clear and crisp. It’s that each option and element of the software, whether part of the original install or one of the many optional apps, is understandable, clear, and well-considered. The company offers its own higher-performance RAID capability, as well. Here, at Camp David, I’m actually running all three of my main servers using DSM, and in the very few times I’ve had a disk failure, I’ve been able to recover and resume with very little effort or stress.

After spending half a year testing NAS boxes from seven different brands, the Synology offerings have been my unquestioned “go-to” recommendation. We’re spotlighting a four-bay unit here, but you can get units with more bays. I run both a four- and an eight-bay unit, along with an ioSafe five-bay unit (more on that below), and I’ve been very satisfied with all of them. 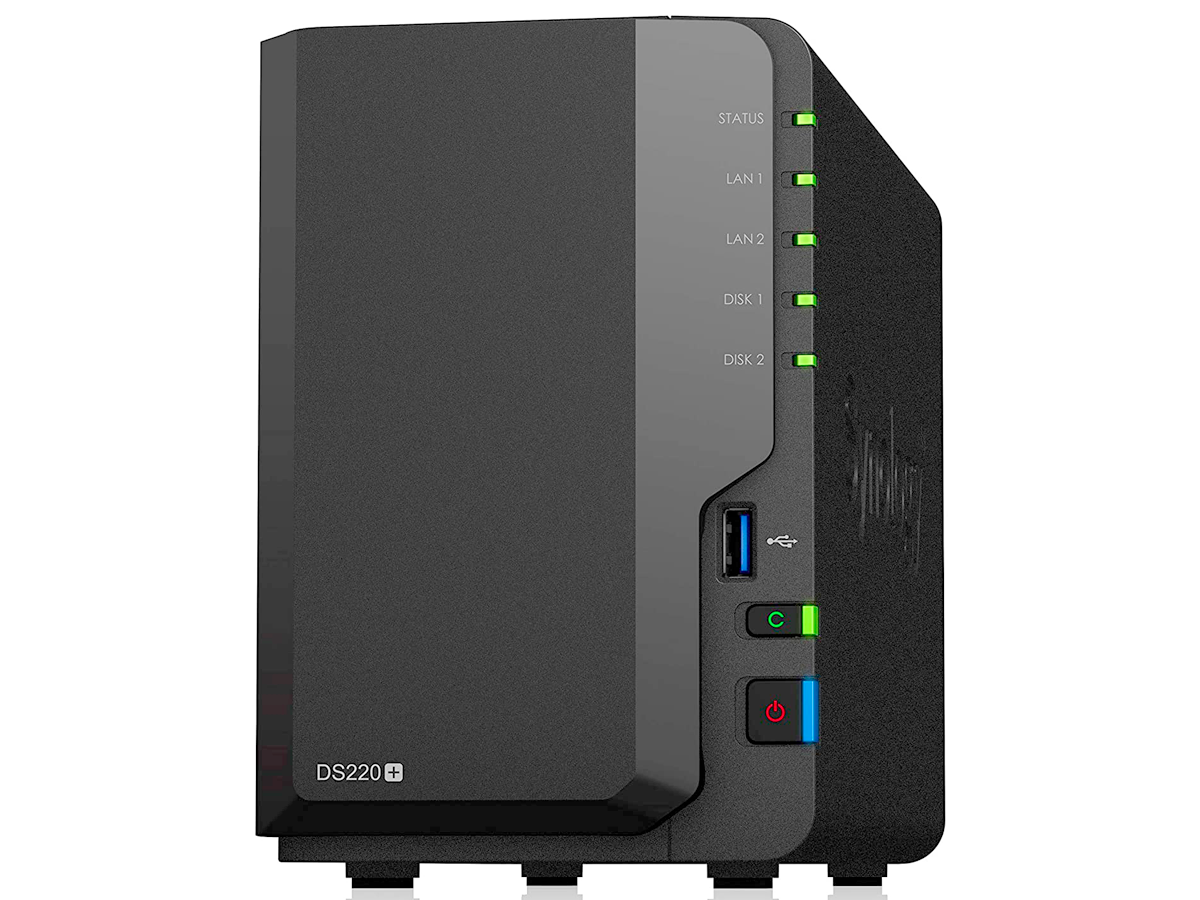 If you’re just getting started with an internal NAS and you don’t want to spend a lot of money, this is probably the best price/performance you’re going to find. You can find two-bay Synology boxes for a hundred bucks less on Amazon, but they’re older models. And you can certainly find other two-bay NAS boxes for less than the $300 this unit costs, but they won’t have the exceptional DiskStation Manager software that makes all Synology units such stand-out machines.

That’s why I recommended this as a starter unit. It gives you the RAID capability that you should definitely have in all NAS boxes (which helps secure your data if a drive fails), along with a wide range of applications and add-ons, particularly for cloud-based backup. 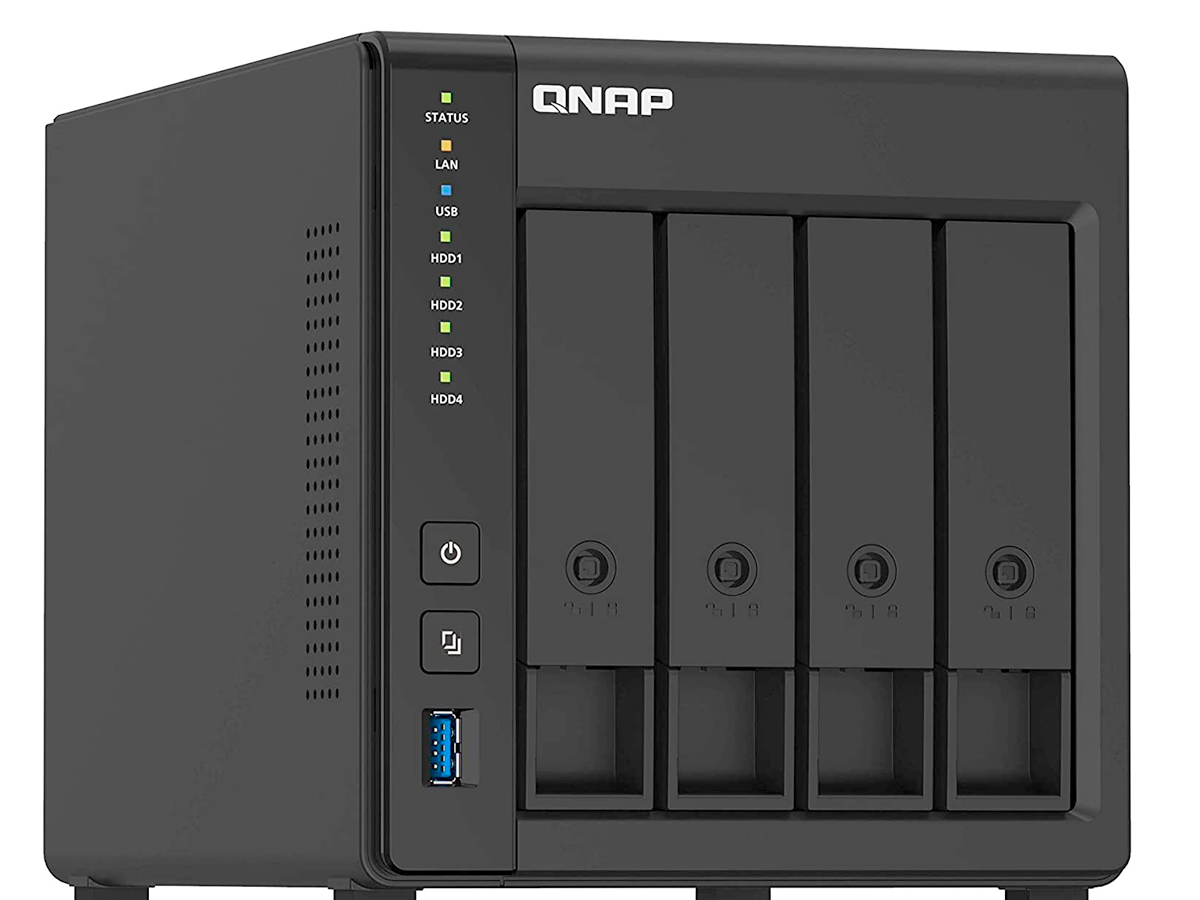 Don’t think of this box as just a NAS. Instead, think of it as a media center computer with RAID and NAS capabilities. Yes, QNAP made its name producing NAS boxes. But this unit adds Intel 600 graphics and an HDMI port, allowing you to play all your media directly from the NAS to your TV’s HDMI input.

The selection of applications QNAP offers is nothing short of ridonculous. Not only can you install the usual NAS suspects, but you can run a Chrome browser or even install a full Ubuntu on top of the NAS capabilities. The only thing missing to make this into a quite capable media center computer is Bluetooth for keyboard and mouse input, but you can use dongles like the Logitech Unifying Receivers to connect your keyboard and mouse to one of the four USB ports. It even comes with a remote control.

My one critique of the QNAP interface is that during my testing of a previous model, I had some difficulty with Mac-based files stored on the QNAP. If you’re using a Mac, connect to the QNAP using SMB instead of AFP and you’ll have better reliability.


Easiest to manage RAID, but barely any server features 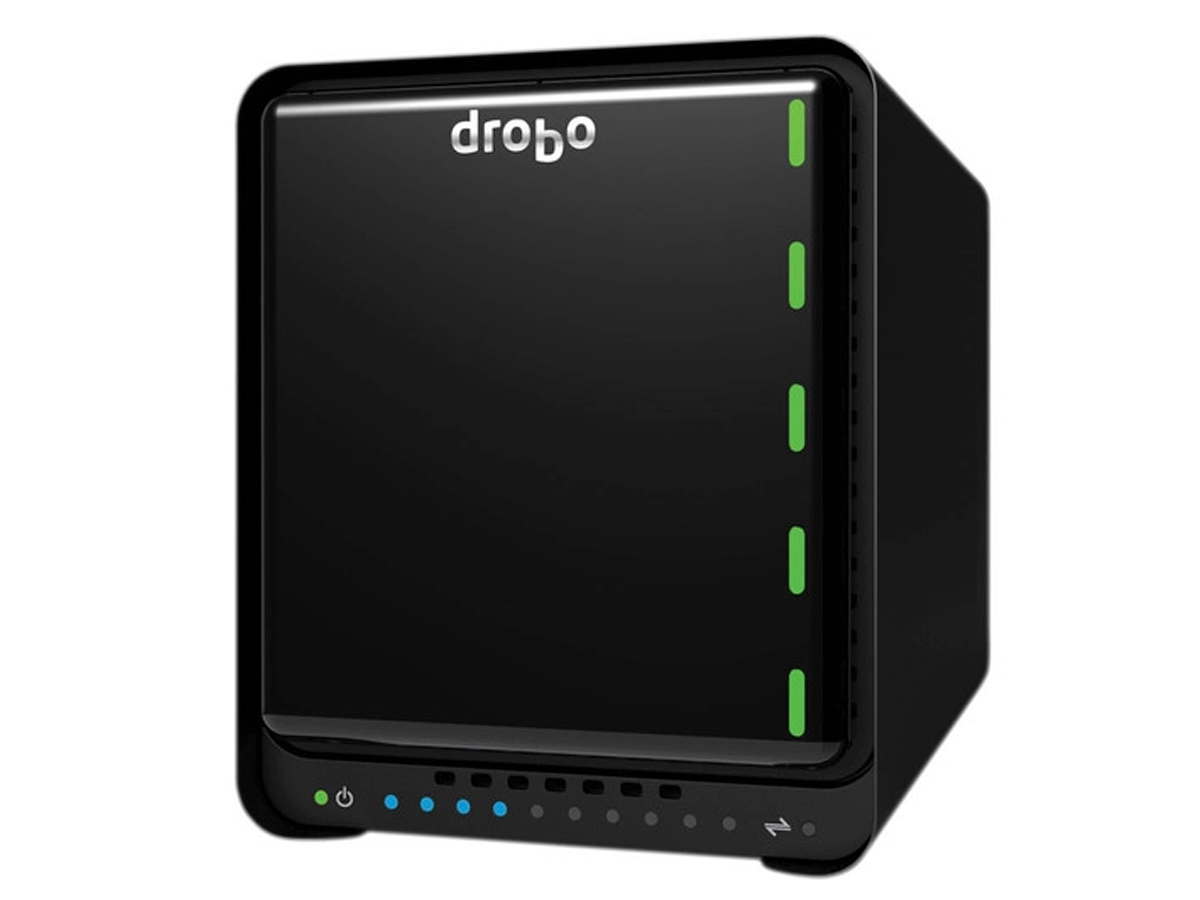 It’s kind of odd that Drobo hasn’t updated its one NAS storage array since 2017, but that goes to Drobo’s main focus as a direct-attached storage solution. Even though it’s been around for a while, the Drobo 5N2 has to go into our list of the best NAS devices, chiefly because its RAID functionality is just so good.

Let’s clarify where this device fits: If you want a server with lots of apps and features, the Drobo is absolutely not for you. But if you want brain-dead easy RAID that keeps your drives safe and available on your LAN, and you don’t really care about much else, the 5N2 is a win. The Drobo justifiably won my best-in-show award for RAID performance, which was flawless in my testing. It also landed at the very bottom for network features, so you win some and you lose some. Go ahead and read and watch my full review for the in-depth details.


Water and fireproof NAS capable of surviving an insurrection 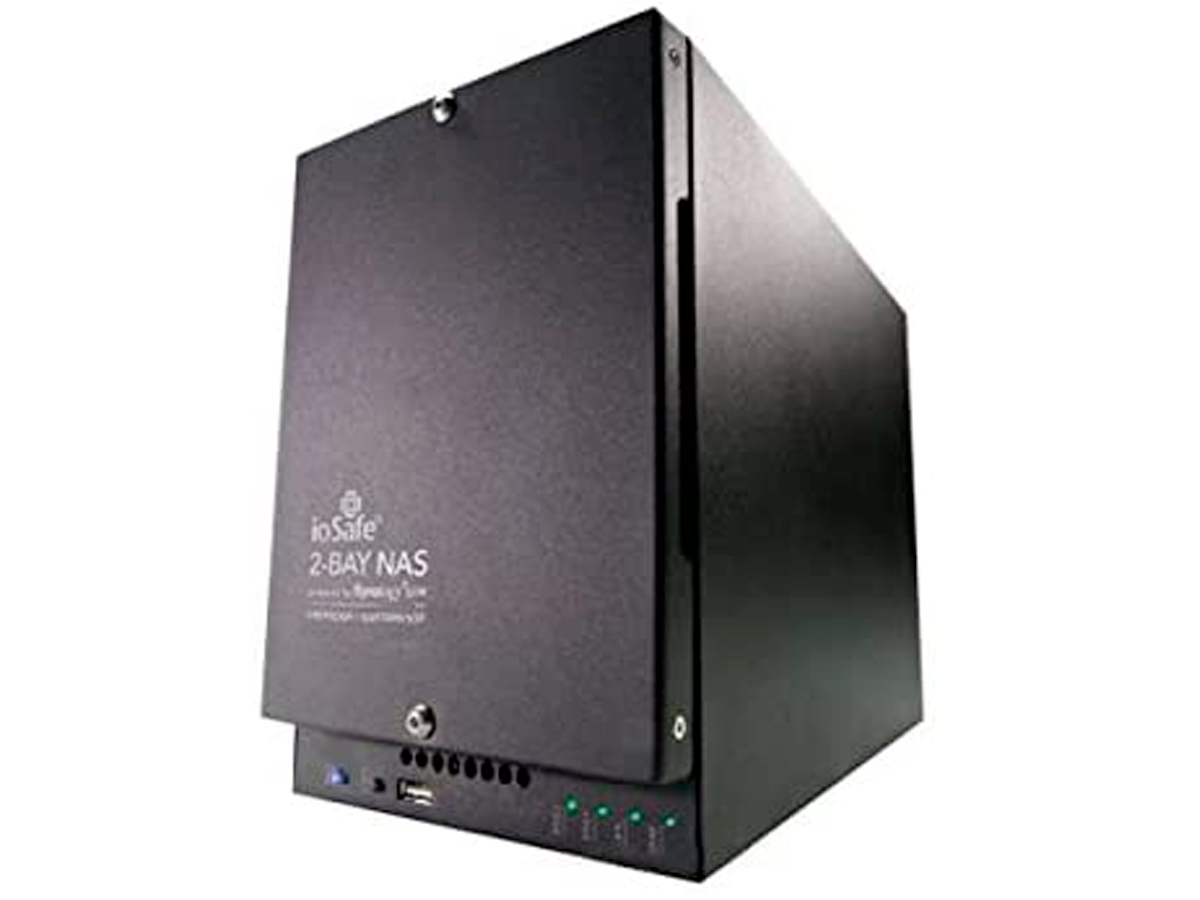 Face it. No matter where you work or what you do, one day the #&@! is going to hit the fan. It doesn’t matter if it’s earthquakes or hurricanes (two things my home office had to live through) or some other form of disaster, it’s likely that your drives will be at risk, at least part of the time.

Now, let’s be clear: We never recommend you store all your data in one place. In fact, the 3-2-1 backup strategy we recommend involves storing three copies of your data, using at least two different types of storage mechanisms and at least one copy of which is stored off-site. But restoring from off-site can be difficult and time-consuming, and cloud backups get very expensive as your data usage goes up. It’s not a bad idea to have a robust storage solution in-house.

That’s where ioSafe comes in. ioSafe builds NAS boxes inside boxes that are, essentially, safes. They’re fire and water-proof. They also weigh a ton and are rock solid, so (especially if you attach them to a floor or closet with an available bracket), you can prevent them from walking away. As a bonus, the ioSafe machines use Synology’s DSM software, making them very easy to use.

I use an ioSafe machine as a second backup to my main Synology box. It comes on once a week, accepts a backup, and then shuts off. That way, even if my network is breached, the ioSafe is powered down except for a few hours each week. My drives are protected physically and (mostly) air-gapped from the internet. You can implement this strategy, as well.

I have a five-bay model, but I’ve recommended a two-bay model here, simply because they are quite expensive due to the added protection. Also, expect to pay $50 to $100 for shipping because these machines are very, very heavy.

I wouldn’t be allowed to get out of this article alive if I didn’t mention the option of building your own NAS box. There is no law that says you need to buy a pre-built box from a vendor. You can repurpose an old PC or even build a very custom NAS solution to meet your exact needs.

For years and years, I always built my own NAS boxes, including some that were very customized. But as the NAS offerings from vendors like Synology, QNAP, and Drobo got better, the need to build my own diminished. I also had a ton of other projects to work on, and delegating NAS building to others saved me some time.

If you’re super-comfortable with speccing PC parts and building PCs, you’ll probably want to go it on your own. But if you’re new to PC building, buying an appliance NAS is probably the way to go. I’m not going to go into too much more detail, because this article covers it in some depth. Not everyone agrees with my assessment, so if you want to really see what folks think, visit my YouTube video of the same name and dig through the hundreds of comments. There are good conversations there.

As with many of my other “best of” lists, this one comes out of my experience. I’ve been running NAS boxes since sometime in the 1980s. A few years ago, I had the opportunity to bring boxes in from seven vendors and stress test them in the lab. From those tests, come my top recommendations.

While the devices here aren’t the identical ones tested in the lab (with one exception), these all reflect the technology from each vendor. In addition, I’m using devices from three of the four vendors recommended here on a daily or weekly basis, so I have a lot of experience with how well they work.

So, how should you choose? In this case, the decision tree is pretty straightforward. You need, of course, to determine your budget and storage needs. Almost all vendors offer models in two bays (room for two drives) and up. If you need a ton of storage, get more bays. I’m running two eight-bay units, one four-bay unit, and one five-bay unit here at Camp David, but I produce a lot of video and need a lot of media asset storage.

From there, here’s a good decision tree:

If you want a media center computer and don’t have a lot of heavy Mac users: Get the QNAP. It has integrated graphics, a boatload of apps, an HDMI port, and can directly connect to your TV.

If you’re concerned about surviving the apocalypse or you work in Congress: Get the ioSafe. It’s an armored fortress of a NAS.

If you don’t care about apps and just want to share files with easy-peasy RAID: Get the Drobo. It makes RAID (even on the bad days when a drive fails) about as easy and reliable as it gets.

If you have any other NAS needs, get the Synology options: Synology is bar far the brand I recommend when people come to me for NAS recommendations, as borne out in my lab testing and experience.

So, there you go. Let us know what you’re doing for file sharing, local storage, and NAS options in the comments below.