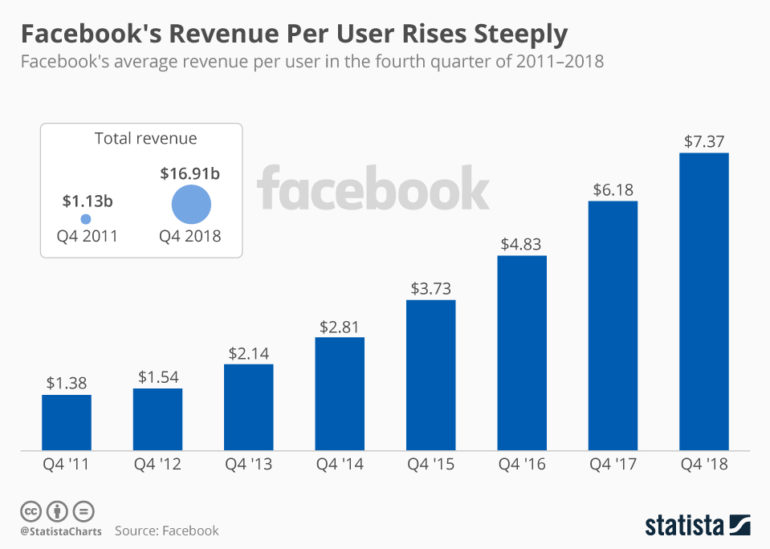 One of the key metrics investors watch when evaluating a social media company, average revenue per user (ARPU), continues to show strength.

Investors care about ARPU, which is measured by dividing revenue by number of users in a quarter, because it shows how effectively companies monetize their users. These social networks are becoming victims of their own success — the pool of new potential users keeps shrinking.

If user growth starts to go flat or decline for these companies, revenue growth must come from squeezing ever more value from existing users.

Facebook is now entering that stage. It remains the clear leader in ARPU, but investors were spooked last week when the social network announced its number of daily active users in the U.S. and Canada fell to 196 million from 198 million in the third quarter. Facebook said it expects its user base in that region to remain flat or decline in the next quarter, too. Its user base in Europe also remained flat at 305 million daily active users for the third consecutive quarter.

But there may be little space for ARPU improvements in the U.S. and Canada region, as Needham analysts pointed out in a note last week. ARPU there was already a whopping $39.63 last quarter, compared with $12.41 in Europe, $3.67 in Asia-Pacific and $2.22 in the rest of the world.

The key to growth may lie in Facebook’s broader family of apps. On the company’s earnings calls, executives discussed early efforts to integrate messaging apps with ads so that businesses can run ads in Facebook and Instagram and take users to a Messenger or WhatsApp thread. Facebook is also expanding its e-commerce business through Facebook and Instagram, and executives suggested last week ads could come to Instagram Reels, Facebook’s TikTok competitor.

These types of auxiliary services for Facebook are still in the “early innings of monetization,” wrote KeyBanc analysts.

Twitter looks to be on the same trajectory of slowing user growth, but investors have less confidence about its ability to monetize. The company doesn’t report ARPU directly, but Raymond James analysts estimated it at $4.30 last quarter, down from its estimate of $4.84 for the year-ago quarter.

Twitter’s monetizable daily active users (mDAUs) grew by just 1 million to 187 million last quarter. Though its earnings beat on the top and bottom lines, its stock has fallen more than 20% since last Thursday’s close.

Twitter has a “more narrowly defined sort of user base and kind of a hierarchy of those users,” said John Freeman, CFRA’s vice president of equity research. “So I think the growth driver for Twitter going forward from my perspective was really monetization, not user growth.”

Twitter cited new ad formats and its Advanced Mobile Measurement program among the drivers of advertising revenue, which increased 15% year over year to $808 million. But it delayed its revamp of the Mobile Application Promotion (MAP) ad product to 2021. Twitter would like MAP to be one of its flagship products to attract advertisers, but it has continually run into technological challenges.

Snap and Pinterest, whose blowout financial results led to large stock spikes last week, both managed double digit year-over-year growth in users, revenue and ARPU. Though there is still lots of room to grow, given how far their ARPUs lag Facebook’s, they are heading in the right direction with their new advertising strategies.

In prepared remarks about earnings, CFO Derek Andersen cited Snap’s investment in original content as a factor in its ability to grow ARPU. Snap has invested in original shows, as well as content developed in partnership with other media companies.

In Apps and WebCompaniesGamingSmartphones
on 16 May 20217 min read

In advertising more generally, Snap noted recent releases such as Dynamic Ads, which allows ads to update in real time after advertisers upload their product catalog, and augmented reality capabilities such as virtual “try-ons.”

The company highlighted recent releases such as automated bidding for ads, which helps advertisers optimize engagement for a given budget, and a suite of merchant tools such as storefront profiles and product tags, which aim to deliver more value.

Lower international ARPU holds true for all these companies, and monetizing the rest of the world will be a challenge as they rely more on overseas user growth.

Take Netflix, for example. The streaming giant added only 2.2 million subscribers last quarter, falling well short of analysts’ estimates. International growth, including 46% of net paid adds from the Asia-Pacific region, was one bright spot, but revenue from these regions is lower. Netflix reported streaming ARPU fell 1.6% year over year as a result.

For a paid service like Netflix that doesn’t rely on advertising, the answer to monetization may lie in raising prices. On the company’s latest earnings call, COO Greg Peters hinted at the possibility of price increases in different countries, saying that if Netflix continues to invest well and deliver value to subscribers, “we feel like there is that opportunity to occasionally go back and then ask members where we’ve delivered that extra value in those countries to pay a little bit more.”

And Netflix did just that last week, when it raised the prices of its standard and premium plans to $13.99 and $17.99 per month, respectively.