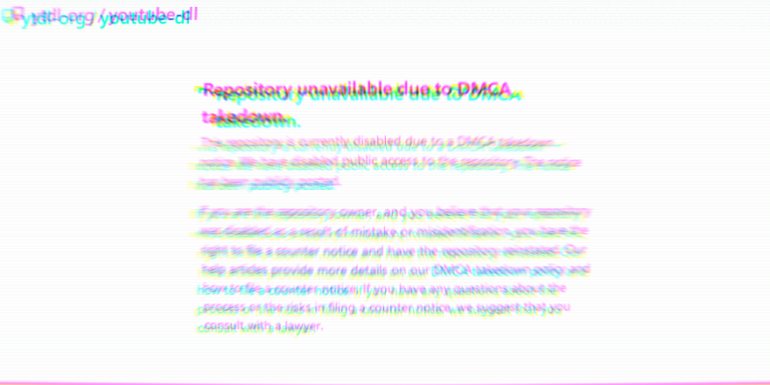 GitHub, a code-hosting repository, had previously removed the library from its portal after it received a controversial DMCA takedown request from the Recording Industry Association of America (RIAA) on October 23.

In a DMCA takedown letter, RIAA argued that the library was being used to “circumvent the technological protection measures used by authorized streaming services such as YouTube” and to allow users to “reproduce and distribute music videos and sound recordings […] without authorization.”

RIAA also noted that the project’s source code “expressly suggests its use to copy and/or distribute the following copyrighted works.”

But in a blog post today, GitHub said the library did not actually break Section 1201 of the DMCA, citing a letter it received from Electronic Frontier Foundation lawyers, who to take up the youtube-dl project’s case.

In the letter, the EFF team explained that Google does not have any technical measures in place to prevent the download of its videos — all of which need to be made freely available to all kinds of apps, browsers, smart TVs, and more.

Hence, EFF lawyers argued that the library could never be taken down under Section 1201 of the DMCA since the library doesn’t actually circumvent any sort of copyright protection system in the first place.

The entire youtube-dl case caught the eye of the entire open-source community ever since GitHub’s October enforcement. Many developers and legal experts felt that RIAA had abused the DMCA mechanism to take down a perfectly legitimate tool.

In an editorial, the Freedom of the Press Foundation argued that the library had many legitimate use cases, with the library being an essential tool for developers, journalists, and internet archivists alike.

The open-source community protested GitHub’s decision by re-uploading the library hundreds of times on the site and even used bugs in the GitHub platform to append the youtube-dl source code to the actual RIAA’s takedown notice.

GitHub got egg on its face after it had to enforce the DMCA takedown, going as far as warning users that they risk having their accounts banned by its automated systems if they continue re-uploading the code on the site.

In Apps and WebCybersecuritySmartphones
on 4 February 20211 min read

But GitHub Senior Manager of Policy Abby Vollmer said today that GitHub had no choice and had to follow the law. Nonetheless, the entire youtube-dl takedown disaster has been a learning opportunity for the company.

Vollmer said that GitHub has decided to establish a $1 million “developer defense fund” that the company plans to use to protect developers against “unwarranted DMCA Section 1201 takedown claims.”

“Developers who want to push back against unwarranted takedowns may face the risk of taking on personal liability and legal defense costs. To help them, GitHub will establish and donate $1M to a developer defense fund to help protect open source developers on GitHub from unwarranted DMCA Section 1201 takedown claims,” Vollmer said.

Furthermore, Vollmer said GitHub will also hire technical and legal experts, along with independent specialists, who will from now on review all DMCA Section 1201 takedown claims going forward to ensure they’re compliant with the DMCA and to protect open-source developers from needless litigation.

“All of this will be done at our own cost and at no cost to the developers who use GitHub. We believe this represents the gold standard in developer-first 1201 claims handling,” Vollmer added.