GitLab now worth twice what Microsoft paid for GitHub 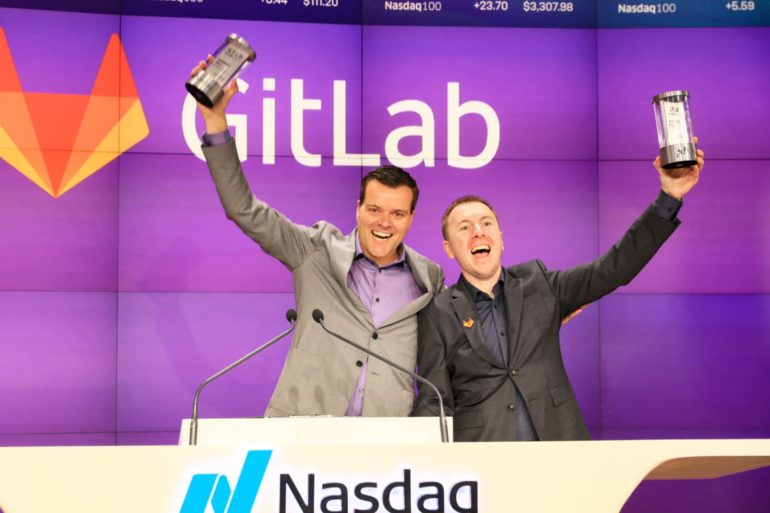 On Oct. 9, 2017, GitLab announced a $20 million funding round led by Alphabet’s GV, formerly known as Google Ventures. The news hit just as larger rival GitHub was about to start its annual developer conference.

It was just one instance of the smaller upstart trying to snag attention from its more established rival.

Just over a year earlier, on Sept. 13, 2016, GitLab said it had raised $20 million in a round led by August Capital. GitHub’s developer event, dubbed Universe, kicked off the next morning.

In the market for code collaboration, GitLab grew up in the shadows of GitHub. Both companies were built on top of the open-source software Git, which was started by Linux creator Linus Torvalds as a way for software developers to share code and work together from disparate locations.

GitHub was founded in 2008. Four years later, it raised $100 million from Andreessen Horowitz, a mammoth round in those days. GitLab launched around the time of that financing.

In early 2015, after GitLab wrapped up its three-month stint in the Y Combinator accelerator program, CEO Sid Sijbrandij namechecked GitHub three times in his two-minute presentation at YC Demo Day.

“Our competitor GitHub has 270 employees. GitLab has 800 contributors,” he said, touting his company’s open-source bona fides. “That is why GitHub enterprise has been playing catch-up to our feature set.”

GitHub had little reason to sweat at the time. GitLab only had $1 million in annualized revenue, and GitHub was not only backed by Andreessen but would soon pull in another $250 million in a round led by Sequoia.

However, GitHub’s cultural deficiencies had been exposed by an engineer named Julie Ann Horvath, who tweeted at length in 2014 about sexism in the upper ranks. Although the company continued expanding after some C-suite tweaks, GitLab suddenly had an opportunity to use its distinguishing culture to its advantage.

GitLab was founded as a fully remote company with no headquarters and not a single piece of real estate. All employees across the globe were said to have equal access to information. GitLab has an expansive online handbook, now consisting of over 2,000 web pages, that lays out in detail how the company operates, regarding everything from finance, engineering and marketing to hiring, stock options, compensation and remote work.

Board meetings were held at Sijbrandij’s apartment in San Francisco’s South of Market district.

“We would all be sitting around his kitchen table, and he had a cat that would be in his bedroom meowing to come hang out,” said Dave Munichiello, a partner at GV who became a board observer after leading his company’s investment in 2017.

Eventually, the board fell in line with the rest of GitLab’s operations and went fully remote.

“It was the last aspect of the company to go remote, and our board meetings are better for it,” Sijbrandij said in an interview on Thursday from the Nasdaq.

Munichiello said the cultural differences loomed large as he was evaluating the two Git-based rivals. So was the fact that GitLab had raised much less cash and had low operating costs.

“We had just gone through this period of time where GitHub was lighting money on fire,” Munichiello said. In GitLab, “we saw a company that had a fantastic culture and understood that developers are the new kingmakers,” he added.

GitHub did not respond to a request for comment.

Then, in June 2018, Microsoft said it was buying GitHub for a whopping $7.5 billion. At roughly 25 times revenue, GitHub was richly priced for that time period, and the deal seemed to crown the market winner. GitLab’s most recent valuation from the year prior was just $200 million.

In fact, the game was just beginning.

GitLab excelled against its larger rival, despite Microsoft’s massive sales engine. It’s also thriving against BitBucket, its other main competitor, owned by Atlassian. In its fundraising announcement in September 2019, GitLab said annual revenue was up 143%. For the year that ended Jan. 31, revenue jumped 87%.

GitLab debuted on the Nasdaq on Thursday in one of the most-anticipated software IPOs of the year. After the stock’s 49% jump in its first tow days, GitLab is valued at almost $16.5 billion, more than double GitHub’s acquisition price from 2018. Its revenue multiple of 71 is one of the highest in all of software and is well above Atlassian’s multiple of 45.

“The market loves fast growth,” said Tomasz Tunguz, a managing director at Redpoint Ventures who invests in software and infrastructure companies. His firm is not involved with GitLab.

Tunguz said that even with GitHub getting swallowed, GitLab showed the world of DevOps — the word refers to a combination of development and IT operations — doesn’t operate by the same rules as traditional software.

In DevOps, developers decide what tools they they use. With so many free and low-priced products available through a simple cloud delivery model, the software giants and their massive sales and marketing budgets don’t have all that much influence over their choices.

So GitLab built a suite of tools that developers want, in a package that businesses could buy.

“GitLab had a sense of the importance of enterprise sales much earlier on in the lifespan of the company,” Tunguz said.

Microsoft’s acquisition of GitHub opened up two big opportunities for GitLab. First, GitLab could peel off developers who had an inherent mistrust of Microsoft and its anti-open-source past. Although current CEO Satya Nadella has made a point of embracing open-source offering where it makes sense for customers, Microsoft historically distanced itself from open source, with former CEO Steve Ballmer once calling Linux “a cancer.”

More importantly, GitLab could promote itself as a neutral service available across all public cloud providers, while GitHub would be owned by the same company that controls Azure, the second-largest cloud service after Amazon Web Services.

In a blog post titled, “Congratulations GitHub on the acquisition by Microsoft,” GitLab made exactly that point.

“The long-term strategic implication seems to be that Microsoft wants to use GitHub as a means to drive Azure adoption,” the post said.

Sijbrandij said the market has played out as expected since the deal. For example, earlier this year GitHub launched a product called Codespaces as a cloud-based developer environment on Azure.

As for customers migrating over, Sijbrandij said UBS signed on last year, going from “zero to 11,000 people on GitLab,” even though the bank, like most big financial institutions, uses a lot of Microsoft products.

“Our customers put great value on us being cloud-independent,” Sijbrandij said. “Every company is becoming multi-cloud.”

Sijbrandij added that Amazon and Google sell GitLab’s tools and those efforts “have been intensifying over the last few years.”

Still, GitLab has financial challenges. Even with no real estate costs and an expansive universe of unpaid developers helping build features, it’s running up big expenditures in sales and marketing as it tries to convert free users into paid customers, who shell out $19 a month or $99 a month for features like enhanced security and faster code reviews.

Cumulative losses for the past four quarters exceeded $200 million. Prior to the IPO, GitLab had just $276.3 million of cash and equivalents on its balance sheet.

Unlike GitHub, which now operates within the cozy confines of cash-rich Microsoft, GitLab needs outside financing to maintain its growth. New Constructs, a research firm that takes a particularly skeptical view on tech IPO valuations, wrote in a report this week that GitLab should be valued as low as $770 million, or 95% below its current price.

“As a cash generating machine, Microsoft can easily afford to offer GitHub services at or below cost in an effort to gain market share and bring users into the Microsoft platform,” the firm wrote. “GitLab’s dependence on one revenue stream, subscriptions and licenses to its DevOps platform, is a major competitive disadvantage as it attempts to compete with profitable companies that have many other revenue streams to support loss-leaders.”

GitLab acknowledges in its prospectus that, “our principal competitor is Microsoft Corporation following their acquisition of GitHub.”

Sijbrandij certainly isn’t expressing concern now that his company has hundreds of millions in additional capital to fuel expansion and, for the first time, a liquid stock that can be used to acquire smaller businesses.

He touts the benefit of GitLab’s full DevOps platform and the ability for developers to use it as their central repository throughout a project.

“We’ve been able to build something that lets you do everything, from planning what you’re going to make, making it, deploying it all the way to monitoring it,” Sijbrandij said.

He says the contrast with GitLab isn’t all that different than it was six years ago, when he was just coming out of Y Combinator. GitHub hosts a lot of open-source projects, but the products its ships are closed and proprietary, Sijbrandij said, while GitLab uses a so-called open-core model, commercializing software that’s open source.

Hearkening back to GitLab’s early funding rounds, Sijbrandij wouldn’t specifically confirm that his intention was to grab some of the spotlight during GitHub’s developer conferences. But he didn’t deny it either.

“When you start off as a company,” he said, “it’s really important you find a way to be part of the news cycle.”