Losses to romance scams reached a record $304 million in 2020 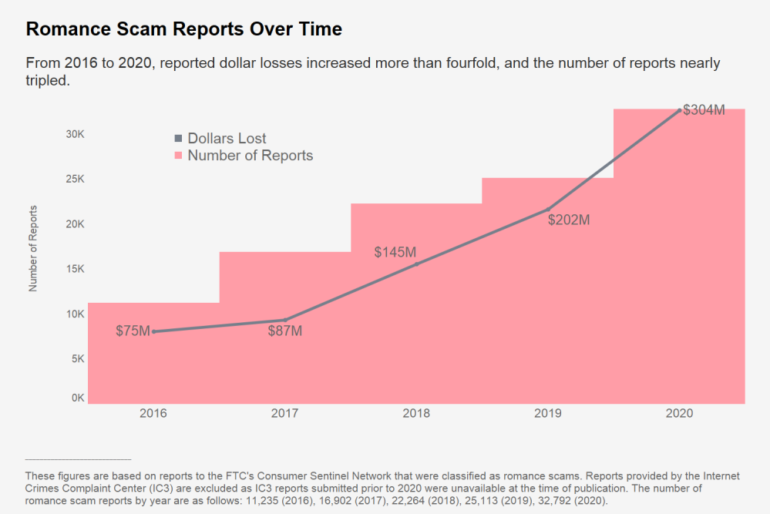 The current COVID-19 pandemic and the subsequent stay-at-home and social distancing directives might have played a major role in romance scams losses reaching record levels in 2020, the US Federal Trade Commission said in a report last week.

Total losses were estimated at a record $304 million, up about 50% from 2019, with the average loss last year being estimated at $2,500 per individual.

“From 2016 to 2020, reported total dollar losses increased more than fourfold, and the number of reports nearly tripled,” the agency said.

The FTC believes that the 50% spike in extra losses recorded in 2020 can be attributed to the COVID-19 pandemic, which has limited people’s ability to meet in person and has forced more users towards using online long-distance and impersonal communications, such as dating apps.

In most cases, the ruse of these scams is that the targets of a romance scam have to send money back to the crooks.

“Scammers claim to have sent money for a cooked-up reason, and then have a detailed story about why the money needs to be sent back to them or on to someone else. People think they’re helping someone they care about, but they may actually be laundering stolen funds,” the FTC said.

“In fact, many reported that the money they received and forwarded on turned out to be stolen unemployment benefits.”

Users targeted on social media too, not just dating apps

“These social media users aren’t always looking for love, and report that the scam often starts with an unexpected friend request or message,” the FTC said.

No more targeted online ads? EU not so sure

In Apps and WebCompaniesSmartphones
on 23 June 20219 min read

“Sooner or later, these scammers always ask for money. They might say it’s for a phone card to keep chatting. Or they might claim it’s for a medical emergency, with COVID-19 often sprinkled into their tales of woe. The stories are endless, and can create a sense of urgency that pushes people to send money over and over again.”

The most common forms of transferring money from victims were gift cards, which saw a 70% spike from 2019, followed by wire transfers.

The US government agency urged users share its romance scam guide with vulnerable friends or family members as a way to reduce the efficacy of these scams going forward.