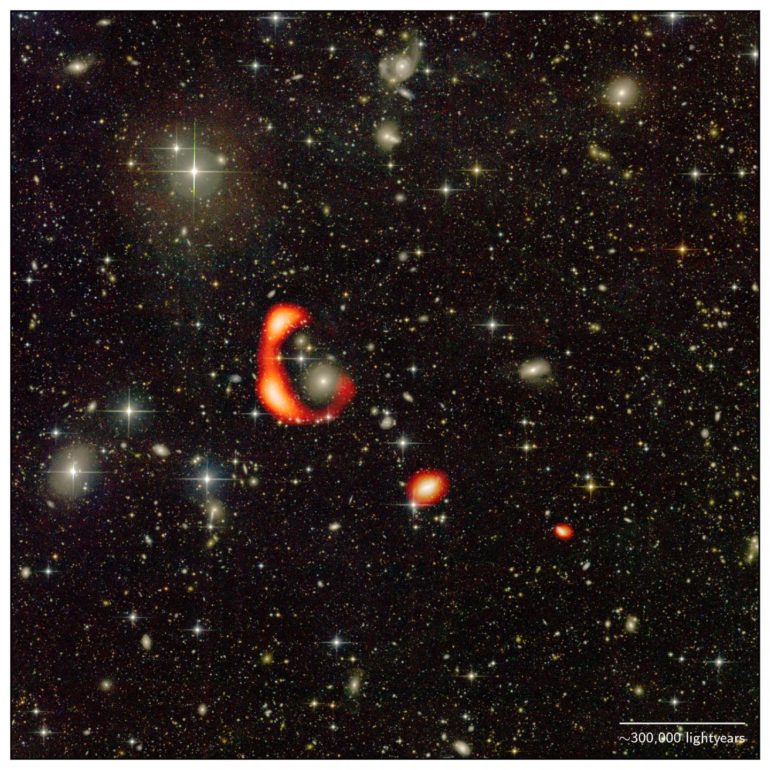 A team of astronomers at the National Centre for Radio Astrophysics (NCRA) in Pune, India have discovered a mysterious ring of hydrogen gas around a distant galaxy, using the Giant Metrewave Radio Telescope (GMRT). The ring is much bigger than the galaxy it surrounds and has a diameter of about 380,000 light-years (about 4 times that of our Milky Way).

The galaxy (named AGC 203001), is located about 260 million light-years away from us. There is only one other such known system with such a large neutral hydrogen ring. The origin and formation of such rings is still a matter of debate among astrophysicists.

Neutral hydrogen emits radio waves at a wavelength of about 21cm. This radiation from neutral hydrogen atoms has allowed radio astronomers to map the amount and distribution of neutral hydrogen gas in our Milky Way galaxy and in other galaxies in the Universe. Typically, large reservoirs of neutral hydrogen gas are found in galaxies which are actively forming new stars. However, despite showing no signs of active star formation the galaxy AGC 203001 was known to have large amounts of hydrogen, although its exact distribution was not known. The unusual nature of this galaxy motivated astronomers in NCRA to use the GMRT to conduct high-resolution radio observation of this galaxy to find out where in the galaxy this gas lies.