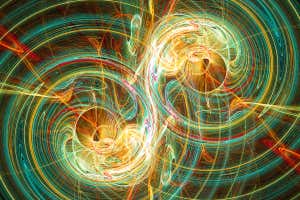 A strange set of gravitational waves have been sent across space by a mysterious object. It could be the smallest black hole ever found or the largest neutron star.

Gravitational waves are ripples in space time that are caused by the motion of massive objects. The Laser Interferometer Gravitational-Wave Observatory (LIGO) has detected these waves from many pairs of black holes colliding over the last few years, as well as one pair of neutron stars.

Now they have found a truly puzzling collision, said LIGO team member Katerina Chatziioannou at a meeting of the American Astronomical Society in Hawaii on 6 January. A LIGO detector in Louisiana spotted signs of two objects colliding, but nobody is quite sure what one of the objects is.

Humans Can Learn How to ‘Echolocate’ in Just 10 Weeks, Experiment Shows

In this smash-up, one of the objects was definitely a neutron star with a mass between 1.1 and 1.7 times the mass of the sun. While the other object is probably also a neutron star, months of analysis have not been able to prove it is, says LIGO team member Nelson Christensen.

Its mass could be as high as 2.5 times that of the sun, which means it could be massive enough to be a black hole.

“We’ve never seen any neutron star with this large a mass,” says Christensen. “The question is, is it really a neutron star? If it is, then we’ve detected a really strange heavy neutron star, but if it’s a black hole it’s a really light black hole.”