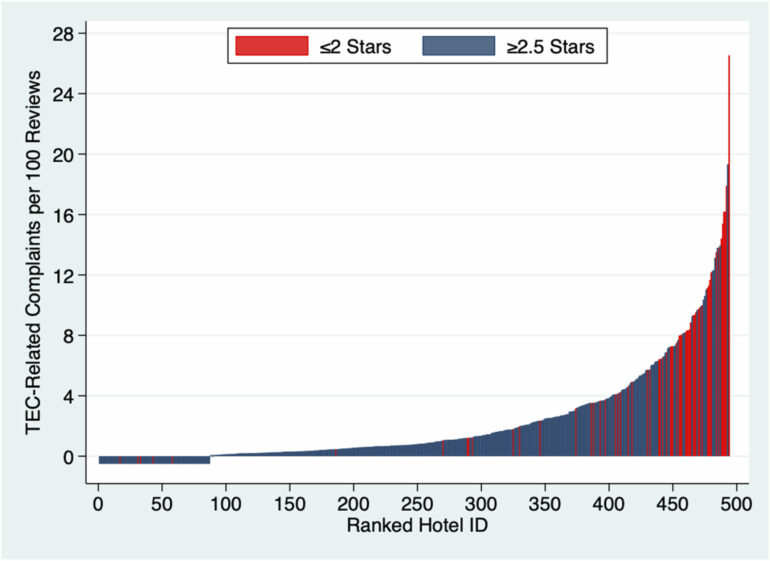 How well are hotels’ smoke-free policies protecting guests from cancer- and asthma-associated pollutants from secondhand and thirdhand smoke residue that lingers in dust, carpets and furniture? Depends on where you stay and how much you can pay, according to a new study by San Diego State University researchers.

The researchers analyzed more than 332,000 TripAdvisor guest reviews about their experiences staying in 477 U.S.-based hotels across 10 states. Of the included hotels, 96% were smoke-free according to TripAdvisor but only 63% of the hotels’ websites stated they were smoke-free. For every 100 reviews from non-smoking rooms, there were, on average, ten complaints related to tobacco, electronic cigarettes, or cannabis pollution. Of these complaints, 80% were about thirdhand smoke residue left behind from tobacco products used by previous guests rather than secondhand smoke from other guests actively smoking.

One of the study’s researchers, Georg Matt, an SDSU professor of psychology and public health, noted, “Many hotels claim to offer their guests smoke-free rooms, but cannot live up to this promise. This is a particular concern for guests who cannot afford the more expensive hotels.”

Some of this stark contrast can be attributed to whether hotels enforce smoke-free policies.

Hotels with ratings lower than two out of five stars had twice as many tobacco-related complaints as higher-star hotels. And hotels in Los Angeles, Detroit, and Birmingham had the most complaints, while those in Salt Lake City and Omaha had the fewest. Each $20 increase in price per night was associated with a 13% reduction in complaints about smoking.

“Moreover, hotels must continually educate and remind their guests about smoke-free policies and consequences, and train their staff to monitor and enforce compliance. Hotels should monitor guest complaints on independent websites such as TripAdvisor.com to respond to emerging guest complaints quickly.”

What can guests do?

“Most importantly, guests should confirm at booking and check-in that a hotel has a 100% smoke-free building policy that prohibits smoking tobacco or cannabis and vaping anywhere in the building,” said Matt.

Guests can increase their chances of a smoke-free experience by booking with a hotel chain with an established record of no or very few customer complaints related to secondhand and thirdhand smoke. Despite these precautions, if they experience secondhand or thirdhand smoke exposure during their stay, Matt recommends that guests should immediately contact hotel management, ask for a different room, and leave a comment on an impartial consumer website like TripAdvisor.com.

ZIP codes matter when it comes to severe COVID-19

Sleeping in a hotel room reeking of thirdhand smoke can not only ruin a much-needed vacation or a work-filled business trip but also be bad for your health. If hotels protect guests by fully committing to, implementing, and enforcing 100% smoke-free building policies, as some have managed to do, guests will have more positive experiences that will likely reflect in their reviews and ratings.

The study is published in Tobacco Use Insights.