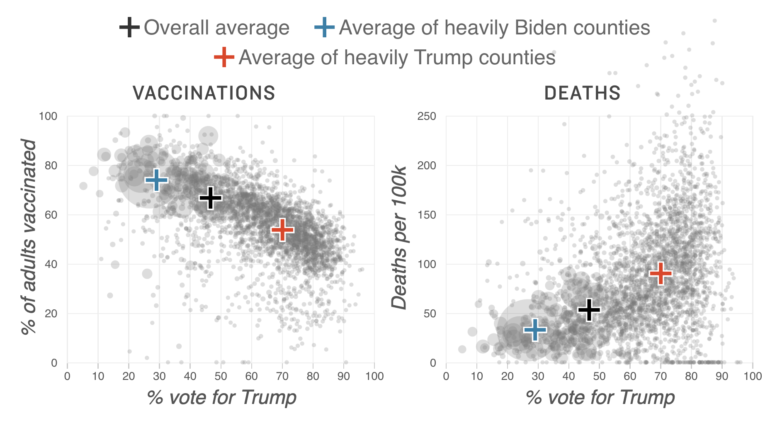 The partisan divide in the United States throughout the COVID-19 pandemic stretched beyond differences in attitudes about masking, social distancing and vaccines. According to a new study led by a University of Maryland researcher, it also is tied to a clear difference in mortality rates from the virus.

In the study, published today in Health Affairs, Neil Jay Sehgal, assistant professor of health policy and management in UMD’s School of Public Health, and co-authors from UMD and the University of California, Irvine Program in Public Health compared the number of COVID-19 deaths through October 2021 with counties’ voting behavior in the 2020 presidential election. Their analysis controlled for other characteristics likely to influence COVID-19 transmission and mortality such as age, race/ethnicity, chronic disease and access to health care.

“People living in states and counties with more conservative voters are dying at higher rates from a largely preventable disease,” Sehgal said. “COVID-19 vaccine uptake only explained 10% of the difference in mortality between red and blue counties. The vaccine-only approach to public health isn’t doing enough to combat the continued toll we are paying.”

The disparity in mortality rates between Republican and Democratic counties was due largely to structural, policy and behavioral differences in the more conservative counties.

“Voting behaviors at the county level are likely to represent the compliance or lack of compliance with mask mandates, vaccine uptake and use of other protective policies to mitigate the impacts of the pandemic,” said senior author Dylan Roby, associate professor of health, society and behavior in the UC Irvine Program in Public Health.

Since the United States surpassed 1 million deaths from COVID-19 earlier this spring and infection rates are up in many states, these policies could help prevent infections and reduce the chance of serious outcomes among those who do get infected, including death or the lingering symptoms known as long COVID, which may affect as many as 30% of people who have been infected.

“The impact of partisanship doesn’t only impact people of one political stripe,” Sehgal said. “Not everyone who lives in a Republican county votes Republican. In very few of these counties was there 70% or greater vote share. Even in the reddest counties, you have people who aren’t able to vote or aren’t able to leave, and yet are subject to the policies and behaviors that surround them. If they are older, immunocompromised or an essential worker, that puts them at greater risk of death or disability.”

As health problems stack up, so do serious financial woes, study shows

More information:
The Association Between COVID-19 Mortality And The County-Level Partisan Divide In The United States, Health Affairs (2022).